Clary’s long-awaited trip to Paris didn’t exactly go as planned on Monday’s Shadowhunters, but at least she and her brother were still able to paint the town red — albeit with blood.

I’m not going to lie, there were moments during Clary and Jonathan’s Parisian jaunt when I genuinely believed they were bonding as siblings. When he told her about “the most beautiful boy” who took pity on him at the height of his grossness, I could feel Clary seeing the good in him. But then she reminded us that the boy was Sebastian, whose kindness Jonathan repaid by kidnapping, torturing and impersonating him to get close to her. In this case, the devil was literally in the details.

Anyhoo, Jonathan took his Chicago-wigged sister to a quaint little antique store where a demonic shopkeep was believed to possess an important Morgenstern family heirloom, a sword capable of opening the “borders of hell.” (Shocker: Jonathan failed to mention that little ability when he told Clary about the sword.) Unfortunately, the coveted item had already been sold, and when the store owner refused to divulge its whereabouts, Jonathan ended his life.

Clary, meanwhile, was being hauled off to the Paris Institute by a Shadowhunter whose stele she swiped in order to call for help. He didn’t initially believe her sob story (“Clary Fairchild is dead!” he screamed, French-ly), but once he got a look at those luscious red locks, he knew le truth. Sadly, his realization came just as Jonathan arrived back on the scene in time to snap his handsome neck. Sacrebleu!

Speaking of Clary’s big fashion reveal, let’s all just take a moment to appreciate this:

Thanks to some very aggressive sleuthing earlier in the episode, Jace, Luke and Alec came to Clary’s rescue — not that she didn’t do most of the heavy lifting (and stabbing) herself. This may not have been the way Clary and Jace envisioned being in Paris together, but the reunited lovers still made the most of their unexpected moment. Jonathan, as you can imagine, was considerably less excited about the couple’s reunion. 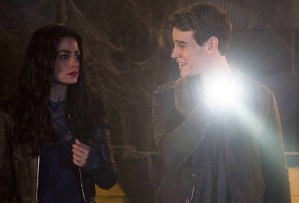 Honestly, though, Clary’s adventure in Paris wasn’t even the craziest part of this week’s episode. The ancient vampire that Simon needed to find in the sewers turned out to be Cain (yes, like Cain from the Bible!), and it seems we only know part of his story: Lilith exacted her revenge on Adam by turning Cain against his brother Abel. Unbeknownst to Cain, he’d also been turned into a vampire, and he became a daylighter after drinking Abel’s  he drank Abel’s “heavenly” blood. (I definitely don’t recall learning that in Sunday School.)

Cain gave Simon the rock he used to kill Abel, explaining that the Seelie Queen could use it to remove his mark. But because things are never that simple in the Shadow World, the process nearly cost Simon his life. In fact, if Izzy hadn’t forced him to feed on her — thus ingesting vampire venom and risking her own sobriety — Simon wouldn’t have survived the removal.

Fortunately, this week’s episode gave us a brief reprieve from the trauma via another peek into Alec and Magnus’ new normal. He may not be able to produce orange juice as easily without magic (so much squeezing!), but Magnus still brings plenty to the table — including some killer fighting moves, as we learned during their sexy sparring session. I love this couple so much, and even though Magnus’ suffering shouldn’t be overlooked, I’m glad the show is giving “Malec” a chance to be happy and just breathe.

Your thoughts on this week’s Shadowhunters? Drop ’em in a comment below.