Netflix is looking to sock it to ya later this spring, with a special commemorating the 50th(-ish) anniversary of Rowan & Martin’s Laugh-In.

Taping this Friday, March 8, at Hollywood’s Dolby Theater, Still Laugh-In: The Stars Celebrate will pay tribute to the Emmy-winning comedy/variety series that ran from January 1968 to March 1973 (meaning, it’s technically been 51 years. #NetflixMath). 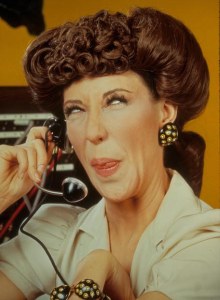 Laugh-In vet Lily Tomlin is among the comedians, actors and musicians who will pay homage to the iconic show with modern takes on quintessential sketches and acts from the original series. Tomlin specifically is set to reprise her seminal Edith Ann and Ernestine (right) characters. Director/producer George Schlatter will also be on hand for the tribute.

An exact airdate for the special has not yet been announced.