You don’t have to know much about geometry to see that Netflix’s Chilling Adventures of Sabrina involve a major love triangle.

The streaming service on Monday released five new images from Sabrina‘s upcoming episodes, which will serve as the second half of Season 1.

Read on for the official Part 2 logline:

Part 2 finds Sabrina exploring her darker side, curious to learn more about her heritage, while struggling to maintain her friendships in the mortal world. Romantically, Sabrina is caught in an unholy love triangle between sexy warlock Nicholas Scratch and salt-of-the-Earth mortal Harvey Kinkle. Meanwhile, The Dark Lord, Madame Satan and Father Blackwood continue to conjure chaos in the Spellman household and the town of Greendale. And they aren’t the only ones trying to raise hell. Everything is in question — relationships, identity, true intentions — when the devil’s work is at hand. 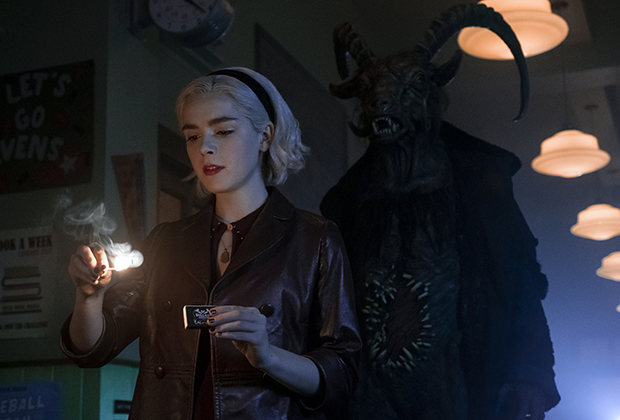 Judging by the photos in the attached gallery, Sabrina will be cozying up to both Nicholas and Harvey in equal measure — but naturally, she also makes time for a demonic entity or two.

Part 2 of Sabrina‘s first season, which will span nine episodes, drops Friday, April 5. (The show has already been renewed for Season 2, which will be split into Parts 3 and 4.)