It’s no spoiler that since Mia exists twentysome years into Arrow‘s future, Felicity would need to find herself in a family way, and soon. But what was mildly surprising this week was who found out first.

Having been read in on the latest with the Ghost Initiative and Diaz’s involvement, Felicity invited Laurel over to share that she had hacked the ARGUS interface that triggers the head bombs. As such, once Diaz has served his purpose, they can take him out with one click. Laurel, though, is kinda digging the fake lawyer/DA thing, so she is in no rush to be the trigger man. Laurel then deduces that Felicity is pregnant, based in part on the lack of alcohol and caffeine during their meet-up, as well as the copious amount of chocolate her host was consuming.

Felicity shares that — despite obviously getting the news at the end of last episode, with Oliver standing right there — she has yet to tell the hubs. But by episode’s end, after opting not to kill Diaz when she had a chance, Felicity explained to Oliver, “What our family needs is a fresh start, one in the light,” adding: “I want our  children to know they’re the most important thing to us, that we’d do anything for them.” Oliver picked up on the plural nouns, and Felicity confirmed her happy news. 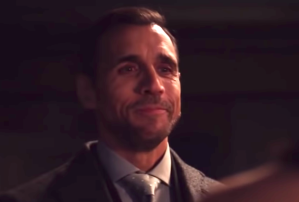 The bigger storyline this week, though, was the aforementioned Ghost Initiative op, in which Diaz was needed to ID Dante at a meet-up between the nefarious financier and a princess who’s planning a coup. Since the Ghost Initiative got burned earlier in the episode via a trap set by Dante’s No. 1, Diggle and Lyla asked Oliver to offer back-up in the field (after he procured Felicity’s OK). When Diaz used a first aid defibrillator to short out the bomb in his brain and then alert Dante (played by Highlander‘s Adrian Paul, readers tell me) to the set-up, both men then attempted to flee. Oliver intercepted Dante outside, but managed to get bested by the baddie. Lyla then showed up and got the drop on Dante, but he still managed to evade capture.

Inside, meanwhile, Felicity held Diaz at gunpoint. But as explained above, her need/want to kill him now places second to what her growing family needs. Diggle KO’d Diaz and threw him back in prison, though in the very final scene, an unseen someone paid a visit, setting Diaz on fire.

*When word of the Ghost Initiative’s bungled op got around, Lyla prepared to meet with the Joint Chiefs and lose her job. Diggle, though, decided to take the rap for going rogue instead, even if it meant leaving ARGUS.

*Oliver, in trying to help Emiko find the man who killed her mother, overstepped his brotherly bounds by seizing control of her revengenda and arresting the supplier of a specialized rifle. After Rene explained that Oliver went too far and needs to “just be her brother,” Oliver apologized to his half-sister, offering a transcript of the suspect’s interrogation as a peace offering. Later, Emiko got a visit from… “old friend” Dante! She reported that Oliver trusts her now, to which Dante said, “It’s time for you to come home”…?!??!

*In the future, Mia wanted no part of the “heroes” mission to find Felicity — until William paid her a visit and they commiserated over their sucky parents. William explained that Oliver and Felicity didn’t follow through on their promise to stay in his life after he went to live with his grandparents. So to hear that they went and had another kid hurts, a lot. Mia in turn said that Felicity always spoke of how her dad was a hero, and yet everything in the future suggests otherwise, since Oliver and other vigilantes appear to blame. William produced the arrowhead rock and explained its significance, even suggesting that Felicity’s distress signal was  meant to unite the two kids. William then took out the Rubik’s Cube, which Mia solved by created a cube within a cube within a cube. The puzzle then popped open, revealing a microcassette. Pretty crafty of Felicity, seeing as it’s analog and can’t be hacked. Now where can they possibly find something to play its message…?

*Also in the future, we learned that Connor Hawke is John Diggle’s adopted son, and thus not necessarily John Jr. (if he is telling/was told the truth).

What did you think of “Brothers & Sisters”?