Janice Freeman, who competed on Season 13 of NBC’s The Voice, died on Saturday at the age of 33.

Freeman passed away from a severe case of pneumonia and a blood clot that traveled to her heart. She was in her Pasadena, Calif. home when she complained to her husband Dion that she couldn’t breathe. He performed CPR until the paramedics arrived, then Freeman was rushed to the hospital where she was later pronounced dead. Her management put out the following statement:

With heavy hearts and sadness we share the news of Janice’s passing . Details about services and in what ways the family can be supported to follow 🖤 pic.twitter.com/iNHiQ4Etnt

Freeman was a cervical cancer survivor. According to TMZ, she suffered from multiple health issues, including lupus. 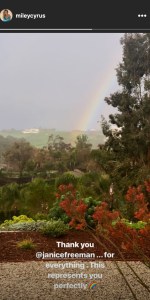 As one of the Season 13’s contestants, Freeman was coached by Miley Cyrus. She made it to the Top 11 before she was eliminated.

Cyrus paid tribute to Freeman on Sunday. “Thank you @janicefreeman … for everything,” she said on Instagram. Beneath a picture of a rainbow, she wrote, “This represents you perfectly 🌈” (Click image to enlarge)

Fellow coach Jennifer Hudson shared a video of Freeman’s Blind Audition on social media. “The voice of hers we got to hear and the bit of life we got to watch her live was a blessing and inspiration to us all!” she wrote. “My heart and prayers go out to @janicefreeman daughter and family!”

@janicefreeman the voice of hers we got to hear and the bit of life we got to watch her live was a blessing and inspiration to us all! My heart and prayers go out to @janicefreeman daughter and family ! @mileycyrus @nbcthevoice #ripjanicefreeman

Meanwhile, The Voice posted the following message to Twitter: