The following post contains spoilers for How to Get Away With Murder‘s Season 5 finale. (Need to catch up? Read our previous episode recap here.)

What a difference a year makes.

When How to Get Away With Murder‘s fourth season came to a close last March, Laurel Castillo’s father had been thrown in jail, her mother had gone off the grid, for better or worse, and life at Middleton University seemed to resume some version of normalcy (except for the lingering mystery of Gabriel Maddox, that is).

But during Thursday’s fifth season finale, the Castillo family made a comeback of sorts, reminding all of us — especially Laurel herself — that defeat won’t come so easily. First, let’s briefly break down what happened in the final Season 5 installment:

* Via flashbacks, we learn that Laurel’s brother, Xavier Castillo, had approached Ronald Miller a few months back, claiming that he could help make Miller the actual district attorney instead of just the interim guy — and it would start with the death of Nate Sr. Throughout the episode, we’re initially led to believe that Miller wanted to work with Xavier wholeheartedly, and that he was OK with Nate Sr.’s murder if it meant becoming D.A. Later, though, it’s revealed that Miller secretly tried to get Nate Sr. transferred from the prison on Wednesday night, a full 12 hours earlier than the Thursday-morning transfer that Xavier had requested, in order to avoid Nate Sr. getting killed.

Miller’s efforts, though, were all for naught. Xavier had found out that Miller was trying to play him, and he paid the prison guards to kill Nate Sr. when he was being moved at night. Miller had been heartbroken to see Nate Sr.’s death on the news, and even more devastated to realize that he’d gotten involved with someone very, very dangerous.

* Laurel sees the video footage of her brother meeting with Nate Sr. at the prison, and she’s convinced that her family has been behind all of these unsavory events ever since Wes died. Together, she and Annalise confront Xavier and reveal what they know: that Xavier had Nate Sr. killed, that he’s been working with Gov. Birkhead to destroy Annalise and that he killed Sandrine. (Xavier claims not to know anything about his mother’s whereabouts and insists he didn’t hurt her… but this is also Xavier Castillo we’re talking about, so I don’t exactly trust him.) 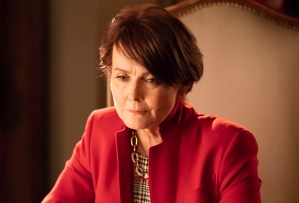 After Laurel and Annalise leave, Xavier calls Gov. Birkhead and reveals that his sister and Annalise foiled his master plan. “So, Plan B?” he asks the governor, to which she responds, “She’s given us no other choice.” Later, while Annalise and Laurel are walking down a Philadelphia street, Annalise answers a phone call from Tegan — and halfway through the conversation, she realizes that Laurel is no longer standing next to her. In fact, Laurel is nowhere to be found.

At the same time, Frank bursts into Laurel’s house and races up to Christopher’s nursery, only to find that Christopher is missing from his crib. “He’s gone, Annalise. They’re both gone,” Frank tells Annalise, who is left to helplessly scream Laurel’s name in the middle of the street.

* Gov. Birkhead goes on live television to tell the people of Pennsylvania that Emmett Crawford is a person of interest in both Nate Sr.’s death and Miller’s death. Even worse for Emmett? After pouring himself a drink in his office later that night, he falls to the floor, convulsing, having presumably been poisoned. (Or perhaps having a heart attack? He is clutching his chest, after all.) Emmett is still alive the last time we see him, even though he’s gasping for air — but on the other hand, Timothy Hutton did just book a pilot for the fall TV season. Hmm.

After screening Thursday’s finale, TVLine spoke with HTGAWM star Karla Souza, who portrays Laurel, to get her insights on her character’s mysterious disappearance (and what it means for a potential Season 6). Read on for her thoughts:

TVLINE | I was a little surprised to see Laurel’s family return in such a big way this season, given how nicely that storyline seemed to wrap up in Season 4. Were you surprised by that, as well, or was this something you and showrunner Pete Nowalk had previously discussed when Season 5 began?
Ever since my family was first revealed in the show at that dinner party [in Season 1], Pete had deliberately planned for my father, my mother and my brother [to be involved]. I had previously done an audition with someone to play [Castillo family friend] Dominick, and Gerardo [Celasco], who plays my brother, had auditioned with me. He was lovely, and he and I had a lot of chemistry, but I remember Pete saying, “I’m holding off because I think he looks like you too much. I don’t think he should play Dominick, I think he should play your brother later on in the show.” So, I had heard Pete’s idea to have my brother in the background, kind of as the Mini-Me version of my father. And seeing as my father was put in prison, I also had that idea of, “OK, that storyline’s kind of wrapped up, that’s it.”

But when I was talking to Pete creatively, as we have every year, we were talking about the implications of what it means to have a son in all of this. Once Christopher’s involved and witnesses a murder, I would definitely make a decision about that, as a new mom. I couldn’t just keep saying, “Oh, this isn’t safe for my son,” and just not do anything. Something must be done. Laurel sees that however much they try to get out of the danger zone, they just keep coming back, and then after she receives her mom’s scalp, she realizes that her premonitions of how evil her family can be are true. In a way, it adds to the guilt of Laurel feeling that her family has been involved in all of the bad stuff that’s happened to the Keating Five since Wes’ death. That’s why it makes this disappearance interesting. The fans might think that Laurel disappeared of her own accord, or that maybe Laurel was abducted by her family in some way, or killed. Those are two avenues that could very well be plausible because of Laurel’s constant fear of having Christopher in this world.

TVLINE | In this finale, the Keating Five learns that Laurel had the opportunity to take an immunity deal with the FBI, which she chose not to do. Did Laurel ever seriously consider taking the deal and getting out of there?
For sure. I definitely played, at least for me, that it was a possibility. If you had to decide whether to protect your son or protect your friends — as a mom, all bets are off when it’s regarding your child. [Laughs] But however close she comes to making that decision, she also realizes the loyalty she has for them. And because of the guilt she feels at her family being the motor of all the bad things going on, that’s why she decides to hold herself accountable and promise that she will be loyal to them. It’s her way of saying, “No, you guys have been loyal to me, I’ll be loyal to you,” and she has to think of another plan. 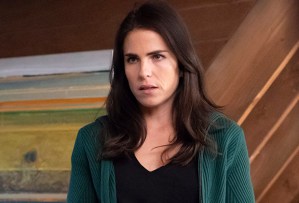 TVLINE | Laurel has a big confrontation with her brother in this episode, but he seems to be genuinely surprised by the news that something bad happened to their mother. Does Laurel have any doubts in that moment? Did Xavier perhaps have nothing to do with it?
As we were working that scene out with Gerardo and [episode director] Stephen Cragg, we said that Laurel’s been the No. 1 concealer of all her cards on the show. She’s been able to put on a front for anyone questioning her, she puts on a whole show for Gabriel. And because [Laurel and Xavier] are part of the same family… it’s open as to whether he knows or not. He plays it very well, but I would say let’s not be fooled by a Castillo. [Laughs] That’s all I would say about that.

TVLINE | And at the risk of sounding like a conspiracy theorist, do viewers have reason to be suspicious of Laurel, as well? We never did see Laurel’s last conversation with her mom, and we don’t know for sure that she didn’t hurt Sandrine. Should we take Laurel’s words at face value and believe that she’s simply a victim of her terrible family?
No, I don’t think Laurel is a victim. I definitely think she plays a part in it, and for me, that’s the more interesting part to play. We’ve seen, more and more often — I mean, she hid that [engagement] ring from Michaela for so long [in Season 1]. She’s capable of a lot of things to get her own way. And now, her own way is protecting her son, so she’s capable of hiding and portraying whatever she needs to in order to have that plan work.

TVLINE | The show hasn’t been renewed for Season 6 just yet, but this finale ends on a major cliffhanger. Were there ever any discussions with Pete, or the writers, about giving this episode a tidier ending since the show’s future is uncertain?
I genuinely think… you know, it would be wrong of me to speak for Pete, but for us, as we’re reading the season, we’re seeing how our show still has a strong fanbase. We’ve never doubted that the show would be picked up. Having Viola Davis at the forefront of a show for network TV — I feel like they’re lucky to have her. I don’t think the writers were thinking that this would be our last season, and I never got the sense from Pete that he felt he had to have a Plan B. I do think he has confidence in the show and the writing.

That’s a wrap, Murder fans! What did you think of Thursday’s finale (and Season 5 overall)? Cast your votes in our polls below, then drop a comment with your reactions!