The remaining six designers were thrown for a bit of a loop on Wednesday’s episode of Project Runway All Stars, which required them to think a little differently about gender and fashion.

“Social awareness about gender has finally become an open conversation,” host Alyssa Milano told the contestants, each of whom would have to “design gender-neutral high-fashion street wear” for a model who either identifies as male, female or non-binary. Though the designers were given their models’ measurements, they wouldn’t actually get to meet them until it was time for the first runway fitting.

None of the designers seemed particularly concerned about this week’s challenge, save for Anthony Ryan Auld, who feared that he didn’t collect enough material to dress his 6′ 4″ model. In fact, prior to sending his look down the runway, he said, “I’ve accepted the fate that I’m going home. I just want to be somewhat happy with the look.”

But maybe the contestants should have been more worried, as Evan Biddell spotted a problematic thread (teehee) running throughout their looks: “Some of these designers are confused by the challenge,” he said. “I’m seeing a lot of weird, asexual space suits. Gender neutral does not mean never having sex again. You can be non-binary and be really hot walking down the street.” 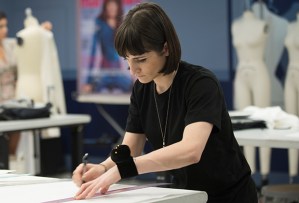 Fortunately, Christina Exie managed to avoid making that mistake, winning this week’s challenge with a relaxed-but-chic look combining a kimono-sleeved coat with relaxed, jewel-layered trousers. Words like “elegant” and “beautiful” were used by the judges to describe Christina’s finished product, which must have been a relief, considering she nearly went home last week. (It just goes to show that you can never predict these outcomes.)

Speaking of which, Dmitry Sholokhov was pretty surprised to find himself in this week’s bottom two, thanks largely to the polarizing buttons on his trench coat-inspired design. Despite looking “flawless and polished,” it didn’t quite meet the requirements of the challenge. Still, the judges preferred Dmitry’s outfit over Sean Kelly‘s Wall Street-meets-leather bar suit. “As stunning as that is, it’s another cliché about pin stripes,” Isaac Mizrahi told him, calling the whole thing “a little dull.”

Do you think Sean was the right designer to go home? Drop a comment with your thoughts on this week’s Runway — including the designer(s) you’re still rooting for — below.