It was the worst of times and then it was the best of times for The Gifted, as Fox’s Marvel mutant drama brought Season 2 to an explosive close. 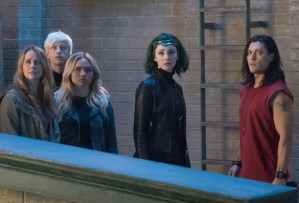 While still reeling from the loss of Clarice, Johnny and the ersatz Mutant Underground — now counting Lorna and Andy among its ranks again — aimed to thwart Reeva’s plan to literally topple government institutions. Along the way, Johnny let loose his inner Thunderbird in the name of taking a bullet or 100 for the team as they fled a Purifier militia, while also giving Jace Turner a beat-down.

The Inner Circle, meanwhile, kidnapped Andy and Lauren and, thanks to Sophie, Phoebe and an increasingly conflicted Esme, compelled the kids to use their combined Fenris power to decimate Sentinel Security HQ!

To prevent any further damage from being done, Reeva herself would need to be stopped. So while Marcos, Lorna and Caitlin kept guards at bay, Reed made his way to the Big Bad’s penthouse for a showdown. Reed of course has little regulation of his nascent power — even less so in the face  Reeva’s own ability. But as his unstable power overcame him, “the most disappointing of the von Struckers” rose from his knees and used a pent-up outburst to explosively incinerate Reeva and her swank digs. As well as himself.

In the aftermath, Lorna and Marcos reunited with baby Dawn, Reed was mourned/saluted for his selfless sacrifice, and Esme used her powers to out Purifiers puppet master Benedict Ryan. Erg beseeched Marcos & Co. to help other mutant groups deal with the lingering Uprising, but that topic was tabled when John sensed something outside. There, the heroes saw a portal open before them, from which an X-tremely stylin’ Blink emerged. She announced, “Something has happened, there is something you need to see,” before casually popping open another portal and inviting everyone to join her.

TVLine spoke with series boss Matt Nix about the challenges that the Season 2 finale presented, what Reed’s death and Blink’s return really were about, and the prospect for a Season 3.

TVLINE | You told me at TCA that you wrote quite the finale, and to your credit that was a lot. What was the toughest nut to crack as far as getting to do everything you had on the page?
We had so many storylines — the Struckers and what’s going to happen with Reed (Stephen Moyer), what’s going to happen with Lauren and Andy; the reuniting of Lorna and Eclipse; resolving the storyline between Thunderbird (Blair Redford) and Erg; the whole thing with Blink (Jamie Chung) and the Morlocks; the Frosts and Reeva — that the biggest challenge was figuring out a story that would allow us to organically resolve all of them at the same time. The other thing of course is that whenever you have the Frosts walking around, you have to shoot the same actress (Skyler Samuels) three times, then do all the eyes, which is quite an undertaking. But yeah, it was actually really fun to do.

Oh, but it was also really cold, unbelievably cold. It was like 22 degrees when Thunderbird emerges from the apartment building wearing a tank top, and the wind was blowing. He did that entire fight, covered in fake blood, his shirt filled with holes…. Blair [Redford] was such a sport about it. 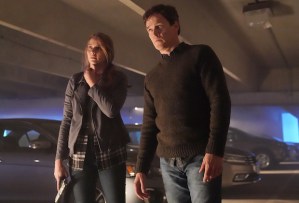 TVLINE | Were you committed to having a hero die in the finale, and was it always Reed?
That evolved over the course of the season. We knew that we wanted to do something big, but what ultimately drove that storyline was less a desire to do a shocking death and more in thinking about Reed’s character, “What is a fitting arc?” It was less interesting to say, “OK, Reed gets super powers, and now he’s another superhero!” as opposed to having Reed, who started this journey as someone prejudiced against mutants, wind up as someone who is willing to sacrifice his life not just for mutants, but for everybody. He sacrifices his life for tolerance and understanding, after starting his journey as someone who meant well but didn’t understand the values of tolerance and understanding.

The important thing to me about Reed was that he wasn’t a bad guy who learns to be good. He was always a good man, but when I think about the themes of the X-Men and what that world has always been about, it’s about expanding our understanding of what it means to include people. It’s not about straight-forward good and evil, it’s about understanding that people who are not like us are not so different after all.

TVLINE | What do you want to say about the very final scene and the opportunity presented by Blink. It appears that some time has passed for her, in that she has obviously finessed her skills.
The interesting thing about Blink is that in the comics, there have been a fair number of versions of the character. The fact is, she’s manipulating dimensions, traveling via these portals. She talked in the previous episode about how when she felt her worst, she imagined going into a portal that went nowhere and being in the spaces in between. So the idea was that — although she doesn’t understand it completely either — when she gets shot and falls into that maelstrom of portal energy, she is in the spaces in between things. And that is a place that is sort of “out of time.”

TVLINE | So the question is perhaps not where she is taking the others, but when?
Where, and when, and what does it mean? It’s something that hopefully we get to explore at some time in the future, but the idea there is that she’s been taken to new places and seen new possibilities. And if nothing else, she somehow she had the opportunity to change clothes! [Laughs]

TVLINE | If Season 2 was about infighting between the Underground and the Inner Circle, plus Purifiers and Morlocks, how would you sum up the conflict ahead for Season 3?
What I really want to explore is, in a world where mutants and humans are largely living separately, and even though mutants are all theoretically on the same side, how do they police themselves? What would it be like to live in a community of all mutants, where people have different powers, different agendas…? The second season was about these different factions debating how they’re going to deal with the humans, and I’d really like the opportunity to explore mutants taking positions on how they should deal with themselves. Do they have a moral obligation to the larger society? If you have these powers, do you have an obligation to use them for other people, or just for yourself?

TVLINE | It’s almost like the Wakanda situation. We have this precious metal that can drive incredible technology. Do we keep it to ourselves, or…?
Exactly, yeah. I always think it’s interesting to give characters what they wish for and then explore the complications of getting what you wanted.

TVLINE | As far as the possibility of a Season 3 renewal, what works in your favor and what doesn’t?
What doesn’t work in our favor is the obvious — we would like our ratings to be higher as a primetime network show. [Note: The Gifted is Fox’s lowest rated, least watched drama.] What works in our favor is that we are a show that has had a pretty decent life on streaming. And I think beyond that, because of how the story is situated, we can stay out of the way of a lot of the larger [Marvel] universe. It’s not likely that in any short term anybody is going to be doing anything that could be incompatible with what we’ve done, if that makes sense. We don’t have versions of the X-Men running around, [and the characters we use] are not smack dab in the middle of the mythology, so we’re not stepping on anybody’s toes.

The other thing is it’s my understanding that we’re doing pretty well internationally. Emma Dumont (who plays Lorna) just went to China and there were a lot of girls who really, really wanted to hang out with her. [Laughs] Superheroes with strong emotions and action seem to travel well.

TVLINE | But if Fox Entertainment (the TV network) and Fox Studios are splitting up, to be owned by different companies, does that give Fox less of a reason to renew you?
Yeah. One would think. Obviously I would love for them to renew us, and there are surprises all the time. Hopefully we’ll get one of those surprises.