Packed with white-knuckle chases, rock-’em-sock-’em fights and mischievous good humor — not to mention the cutest non-couple since Bond and Miss Moneypenny — Whiskey Cavalier hit the ground running Sunday. But were you international-intrigued enough by Scott Foley and Lauren Cohan’s spy games to set your DVR for the whole season? Read on, and after a blow-by-blow of the action, you can grade the pilot and hit the comments with your review. 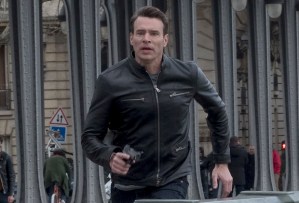 ‘VERY PUNCTUAL… I LIKE THAT IN A TRAITOR’ | As the episode began, FBI agent Will Chase (Scandal vet Foley) was in Paris recovering from his breakup with fiancée Gigi by watching romcoms, ugly-crying and listening to way too much “Total Eclipse of the Heart.” Or at least he was until he received a call from buddy and colleague Ray Prince (Josh Hopkins, late of Cougar Town). Will — code name: Whiskey Cavalier — was to provide backup while Ray posed as an arms dealer interested in buying a vial of ebola from Dr. Stephen Conrad, a CDC scientist with a massive gambling debt. And the bust might have gone down just fine — despite Will’s broken heart, he appeared to be a natural Bourne operative — except that Ray was tardy, and Conrad and his henchman were not. Reluctant to lose the traitor and the deadly toxin he possessed, Will leapt into action and soon found himself dodging bullets as he pursued Conrad’s goon (and the ebola) all over Paris. When at last the g-man had shot the bad guy and all but flown through the air to keep the vial from shattering, he allowed himself to be distracted by the sight of a couple getting engaged. And that quickly, the henchman regained consciousness and shot Will. “City of Love, my ass,” he cracked after returning fire and removing a slug from his bulletproof vest. And what, he wondered, was up with the last text that the villain had received? A single word: CAUTE.

Later, at the US Embassy in Paris, Ray admitted to Will that he’d been late to the bust because he’d gotten lost as he left a young woman’s apartment. And it totally hadn’t been worth it, Ray insisted even as his grin contradicted him. Stealing a private moment in the men’s room, Will called pal Susan Sampson (Devious Maids’ Ana Ortiz) to ask if she thought Gigi missed him. Though Susan was a high-profile FBI shrink, she was still happy to counsel her friend. “What did we decide about your feelings?” she asked him. “I have my feelings,” he replied. “My feelings don’t have me.” No sooner had Susan volunteered to call Will later — “We’ll eat ice cream on the phone together” — than he was busted by his boss, Alex Ollerman (Dylan Walsh). Once they’d taken their conversation to Ollerman’s office, Will pleaded not to be benched. Yes, it was true that he’d just broken up with his fiancée. But “it was mutual,” he said. “Mostly from her side.” And it hadn’t been that bad. “Son, we have the footage,” Ollerman revealed before replaying the moment that Gigi dumped Will. It had been that bad. Nonetheless, Whiskey was given a new case: He had 48 hours to get to Moscow and retrieve from the Russians one Edgar Standish (The Walking Dead’s Tyler James Williams, who stole the whole show for me). The NSA analyst had broken into the State Department’s mainframe and made off with a whole mess of classified info. 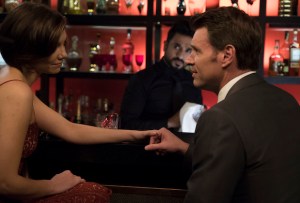 ‘UH, SHOULD I PUT ON A SEATBELT?’ | In Moscow, Will — Ray buzzing in his earpiece — waited at a swanky bar for a glimpse of Edgar with the Russkies. Right on cue, Will was joined by Dr. Valerie Tyne (The Walking Dead’s Lauren Cohan, using her British accent for a change). Will knew that he shouldn’t take his eyes off the prize, but she reeled him in with a story about how she’d just broken up with her boyfriend. Upon spotting Edgar in Russian custody across the street, Valerie — who was of course CIA operative Frankie Trowbridge (code name: Fiery Tribune) — threw an exploding compact and handcuffed Will to the bar before he’d even guessed that her accent had been fake. Before the smoke had cleared, she’d shot Edgar’s captors and sped off with him in tow. Since Will’s work Ferrari was getting a boot put on it, he stole a Russian police car to give chase. And it was a helluva thrill ride if you weren’t Edgar. “You’re driving really fast, and you’re shooting?!?” he exclaimed to Frankie, who when cornered, wasn’t above clipping Will even after he’d gotten out of his cop car. Once she had both Will and Edgar in her vehicle, the two agents quarreled over jurisdiction so passionately that the hacker couldn’t help but note, “A lotta sexual tension in the car.” Still, this was no laughing matter: Frankie wasn’t about to hand over Edgar to Will, because he’d downloaded onto a tarball all of her colleagues’ covers. If it got out, they were as good as dead.

When the trio arrived at a hideout being manned by Frankie’s cohort (and more) Dimitri, she revealed to Edgar that, since he wouldn’t talk, he’d be taken away for “enhanced” interrogation. As for Will, she couldn’t let him go, either, lest he make trouble for her. Oh, and she made it clear that she knew all about his breakup. But hey, some women find sensitivity in men irresistible. “Not me — or Gigi, apparently,” she quipped. “That’s a little mean, even for you,” Will replied. Once he was alone with Edgar, he encouraged the suspect to tell him the location of the tarball. Of course, Edgar couldn’t do so — that information was what was keeping him alive, after all. The following morning, we learned that Edgar had “slipped Dimitri some bitcoin on the way to the toilet” so he’d bazooka to smithereens the chopper that had been sent to pick up the prisoner. Breaking free of his binds, Will shot Dimitri and declared that this was all now an FBI matter. As such, he was taking Edgar and Frankie to Paris. While stopped at a militia checkpoint on the Russia/Belarus border, Will apologized to Frankie for killing her boyfriend. Ha — he wasn’t that. No one was. “I don’t do emotional attachments,” she insisted. Still, she did a fine imitation of a newlywed as she and Will played married tourists to get past the guards with Edgar in the trunk.

‘SHE’D SAY HI, BUT SHE’S LOST A LOT OF BLOOD’ | No sooner had Will and Frankie crossed the border than she got the drop on him and chucked him in the trunk with Edgar. (How big was that trunk, anyway?!?) While Will instructed Edgar to get the cuff keys he’d swiped out of his front pocket — “That’s not the keys” “Yeah, I know that now” — Frankie met in Nuremberg, Germany, with colleague Jai Datta (stand-up comic Vir Das), who — aha — had been undercover as the bartender when she’d met Will. (And she hadn’t even tipped!) He was happy to bring her supplies but still advised her to stop pushing people away. (Everyone got a sense of what her story arc will be now?) When she later opened the trunk to offer Will and Edgar some snacks, the g-man surprised her with a kick to the stomach and eventually came out on top after a nasty bit of fisticuffs. “We did it,” cheered Edgar, who hadn’t done anything. Traveling by train through Furth, Germany, Edgar confessed to Will that he’d worked for the division of the NSA that tested other agencies’ security systems. What his program had wound up doing was uncovering patterns of corruption within the agencies. So you see, he actually was the hero that he’d always wanted to be — he wasn’t a traitor, he was a whistle-blower! During a call to Susan, Will learned how formidable an agent Frankie was. So thank goodness they’d shaken her. Cue Frankie sitting next to them in 3, 2…

When Frankie and Susan weren’t busy forming a mutual admiration society over the phone, the latter reported that there was a bounty out on Whiskey, Fiery Tribune and Edgar’s heads. So the trio got off at the next stop (Lyon) to kick some ass. (And you know I’ve watched too much Walking Dead when I keep expecting Cohan to stick a knife into the baddies’ heads like they were zombies.) They made it as far as the street and Frankie hailing a taxi… only for the driver to turn out to be a bounty hunter! Before anyone could yell, “Mon dieu!” she’d been shot (and without a bulletproof vest, either). “Just go, I’m fine,” she told Will. But no way was he leaving her behind. So the threesome made tracks to Ray’s hideaway, where it appeared they’d interrupted a tryst. No time to worry about that, though. Will had to kitchen-knife out of Frankie a piece of her shirt that had gotten in her insides when she was shot. And despite her disinterest in trusting people, she responded to Will’s sweet reassurance. “I’d hate to lose you when things are starting to get interesting,” he said. OK, she replied. But “you’d better give me a cute scar.” Afterwards, Will was apologizing to Ray for busting in on his romantic moment when his lover returned from an errand. Aw, man — it was Gigi! And they’d been together for seven months! (With friends like that… damn!) 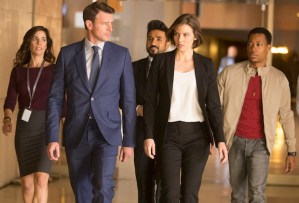 ‘AS DISAPPOINTED AS YOU ARE IN ME, I’M EVEN MORE DISAPPOINTED IN MYSELF’ | While Will busied himself socking Ray, in strolled Ollerman, who painfully removed the dental implant in which he’d learned that Edgar had hidden the tarball. When Will balked at the notion of his boss taking Edgar back to Paris — protocol dictated that Whiskey should — Ollerman pulled a gun, in so doing revealing the insignia on his ring: CAUTE, Latin for “caution.” He’d sent the telltale warning text, and he’d wanted the tarball to make it into the evidence room, where Ray’s ineptitude would make it easy to steal. Since Ray was now useless, Ollerman shot him. And he would have shot everyone else, too, had Frankie not detonated some kind of exploding tampon — eat your heart out, 007! — giving Edgar a chance to kick a knife over to Will for hurling into the traitor’s chest. Whew! As the pilot drew to a close, Will and Frankie were given a new assignment at the FBI’s New York field office — and an impressive team with whom they could tackle the case: Edgar (since “I’m a hero now”), Susan and Jai. And just who would be leading the team, Whiskey Cavalier or Fiery Tribune? That, they’d surely be debating for weeks to come. So, what did you think of the show? Grade the pilot below, then hit the comments.