HBO’s True Detective closed the case on a twist-filled third season on Sunday… but did all the revelations add up?

We pick up with Hays in the back of Hoyt’s car — hi, Michael Rooker! — as the chicken magnate takes swigs of hard liquor and hopes “we can resolve this.” They end up in the woods, where Hoyt demands to know what happened to Harris James. Hays lies that, last time he saw him, they just talked about Julie, but Hoyt taunts him with the knowledge that, thanks to a tracking device, he knows exactly where Harris James ended up. “You wanna swap confessions?” Hays fires back, and makes noise about “coming to see him again” sometime, but Hoyt holds the prospect of telling Hays’ family he’s a murderer over his head, which shuts him up. 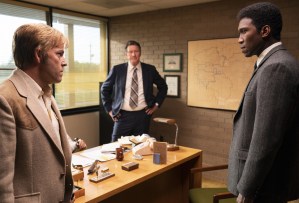 Back in 2015, Hays and West get a lead on the black man with one eye — Junius Watts, aka Mr. June — but in 1980, Hays’ superiors crack down on him for Amelia sniffing around the case and publishing things about it in the paper. They want Hays to sign his name to a rebuttal refuting her claims, and West pushes him to say yes — but he takes a severe demotion to the records department instead. West can’t believe he’d throw away his career like this (“You’re just gonna go be a typist?”), and when Hays says they’ll still see each other… we’re thinking they won’t. The image of Hays stuck in a room full of typewriters is a sad one indeed.

Old Hays and Old West make their way to the now-abandoned Hoyt estate and march inside, making their way through a labyrinth of subterranean tunnels. They make their way to the infamous “pink room” where Tom Purcell met his maker, a kid-friendly princess abode with drawings of “Queen Isabel” and “King Junius.” Julie was kept captive there for years by the Hoyts, it seems, and West wonders what took them so damn long to unravel this mystery. (Hays: “I had a family.” West: “That must be nice.”) 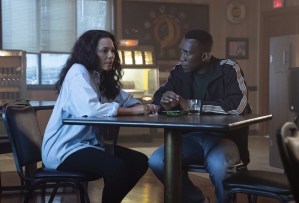 Hays flashes back to 1990, where he has to explain his car time with Hoyt to a suspicious Amelia, brushing it off as “the bad part of the case.” She can’t handle them having such a big secret between them, and they have a tearful heart-to-heart: She encourages him to step away from detective work, and he encourages her to write something that isn’t a true-crime exposé. Meanwhile, West saunters into a biker bar and brazenly picks a fight with the meanest looking one, taking out four or five of them before finally being overpowered. Later, he sobs into a bottle of whiskey, finding some comfort in the arms of a stray dog. (His first of many!)

Old Hays and West track down Junius Watts, aka Mr. Milky Eye, and he’s not surprised: “I’ve been waiting for y’all.” (He was the one in the car spying on Hays.) He always worked for Hoyt, and helped raise his daughter Isabel. After an accident killed her husband and daughter, a drugged-up Isabel mistook Julie for her dead daughter, and they innocently played together for a while. But during one play session, Isabel wanted to take Julie home for good, and, after a struggle, shoved Will down, hitting his head on a rock and killing him. They paid off their mom Lucy to go away and took Julie back to live in the “pink room,” where Isabel doped her up with lithium. Junius eventually helped Julie escape, and Isabel died after taking an overdose of pills in her wedding gown. He found Julie years later at a convent, and Old Hays and West confirm that with a nun there, who tells them Julie died of HIV in 1995. Junius is ready to face the music, but West tells him they don’t have the authority to haul him in: “You don’t want to live with it? F–kin’ don’t.”

They apologize at Julie’s grave and randomly run into the Purcells’ childhood pal, landscaper Mike Ardoin — and his daughter Lucy. Back at home, West asks if he can crash with Hays a few nights a week, promising to keep his dogs in the backyard. They share a warm hug, and reveal that Hays’ estranged daughter Becca is about to visit, too. But it’s too early for a totally happy ending, right? We go back to 1980, where Amelia needles Hays about why he’s suddenly being distant. He coldly hands her a box of her stuff and tells her to get out, accusing her of using him to get information about the Purcell case and blaming her for turning him into a “f–king secretary.” She fights back, telling him to go ahead and sign that statement and walking out on him. 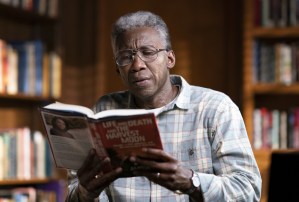 Old Hays finally picks up Amelia’s book and happens to read a passage about… Mike Ardoin! The boy always thought he’d marry Julie when he grew up. Then Hays is once again haunted by a vision of a seductive Amelia: “What if the ending isn’t really the ending at all?” She wonders if Mike actually recognized Julie at the convent, and the nuns lied about Julie’s death. Is Julie still alive… and the mother of that girl Lucy? Hays frantically rushes to track down Mike’s address and arrives at a picturesque suburban home. But once there, he hesitates. Even as a Julie-esque mother and her daughter walk out the front door, he calls his son Henry and confesses: “I think I’m lost.” Helpless, he asks the mother for help and gives Henry the address, sheepishly admitting he forgets things. She offers him some water, and they share a silent moment together, the truth never crossing Hays’ mind. Henry — and Becca! — come to pick him up, and Hays simply goes home to play with his grandkids. (He does hand Henry that address, though, and he pockets it. To deliver to Elisa?) West joins them, and they share some celebratory iced tea on the porch.

A glance at his grandkids riding bikes triggers one final memory for Hays: a reunion in a bar with Amelia in 1980, where she recognizes that he’s trying to push her away. “You want a do-over?” she asks, and he offers a sincere apology. He doesn’t know if he wants her to stay, but he does know one thing: “I think I wanna marry you.” They leave together, hand in hand, and walk off into the great unknown. Plus, we get a flash of Hays in the Vietnam jungle as a tracker. Did he finally find what he’s been looking for?

Alright, it’s your turn, armchair sleuths: What’d you think of the True Detective finale, and Season 3 as a whole? Grade the finale, and the season, in our polls, and then hit the comments to share your post-finale thoughts.