Monkees bassist Peter Tork has died at the age of 77.

Word of Tork’s passing was confirmed on his official Facebook page. A cause of death was not disclosed, though Tork was previously diagnosed with a rare form of cancer back in 2009. 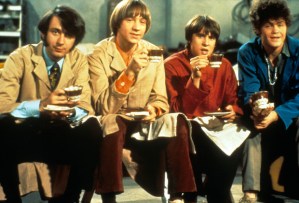 The Monkees were a teen-pop sensation when they burst onto the scene in the 1960s, and viewed as America’s answer to The Beatles. The group spawned multiple hit singles (including “Last Train to Clarksville” and “I’m a Believer” and “Daydream Believer”) and a self-titled NBC sitcom, which produced 58 episodes during its two-season run. Tork split from the group shortly after their critically derided 1968 release “Head.”

Tork struggled with alcoholism for much of the 1970s. He also attempted to launch his own group, Release. He rejoined The Monkees in the 1980s and took part in multiple reunion tours. He also pursued a career as a solo artist.

In 1995, Tork was cast in the recurring role of Jedediah Lawrence, father of Topanga, on ABC’s Boy Meets World. He guest-starred alongside Davy Jones and Micky Dolenz in the Season 3 episode “Rave On” (watch a clip below).