Abbi took a nasty spill this week on Broad City… but she ended up falling in more ways than one. 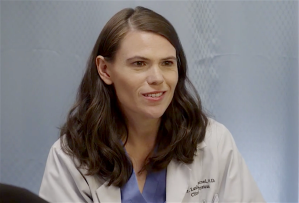 After an embarrassing nosedive at a fancy art exhibition left her bloodied, Abbi headed to the ER and struck up a flirty banter with Lesley, a doctor played by Veep veteran Clea DuVall. Even though Abbi’s never dated a woman before, their quick chemistry led her to impulsively ask for Lesley’s phone number — and to contemplate exploring a new side of her sexuality. (Not with Ilana, though. Sorry, Ilana.)

Abbi’s storyline comes directly from star Abbi Jacobson’s own experience dating a woman. “Most of the show is based on some sort of seed of reality” from the writers, she tells TVLine. “I was just really proud to give that to the character. Ilana’s always been seen as the fluid one, so it was so cool” to see Abbi get in touch with that side of herself, she notes. But it’s not just about experimentation for its own sake, Jacobson’s co-star Ilana Glazer adds: “As we wrote it, it’s less about, ‘Women!’ and more about, ‘Who would Abbi get along with in this way?'”

DuVall is known for playing tough women, but “we were so excited to see her be this soft, sweet version,” Glazer says. “It felt like it was really her.” And DuVall fit right in with the Broad City cast, too: “She felt a little bit like [fellow guest star] RuPaul… which I bet no one’s ever said to Clea before. But it was similar. She just clicked right into the world.” 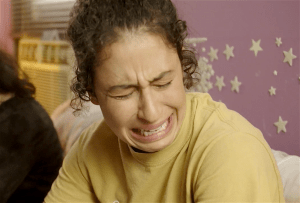 But how does Ilana — who has nursed a not-so-secret crush on Abbi all series long — feel about this new revelation? We got a hint when Ilana reacted way too enthusiastically to Abbi’s news at first… and then turned away to let out a silent sob. Next week’s episode “is when the girls really deal with it,” Glazer hints, and the resulting discussion… well, it’s complicated: “We were like, ‘Does she want to be Abbi’s girlfriend?’ No, not really. ‘Is she jealous?’ Not really. It’s a nuanced, twentysomething friend/life partner thing.”