As NBC’s yet-to-be-renewed Manifest wrapped its freshman run this Monday, was the landing smooth or a bit bumpy? Oh, and how about that Season 6 finale cliffhanger!

The season’s final calling was to “STOP HIM,” which everyone took to mean James Griffin, the guy who jumped time while submerged underwater for nearly four days, and then used his own calling to stop a bomb threat and thus earn himself a free pass for multiple homicides. Freshly sprung from jail and suited up, Griffin booked a live hit on Not the Today Show, where he planned to reveal his “super power” — which would in turn put the Flight 828 passengers, Cal included, under greater scrutiny. 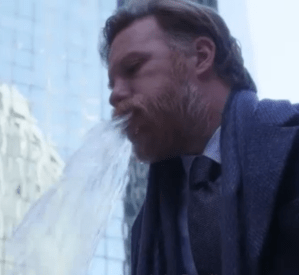 Wanting to protect Michaela from her new nemesis, Zeke illegally purchased a gun (ugh), and the flatfoot that Jared had tailing the cave man caught the surreptitious transaction on camera. As Griffin walked the red carpet (?) to his morning-show appearance, Ben and Michaela arrived to beg him not to revealing the callings. All Griffin cares about, though, is cashing in on his ability. But then, just as Zeke in the crowd seemed about to raise his pistol and pop Aquaman, Griffin doubled over and began expunging lots and lots of sea water. Real Monty Python stuff. After his final spurt, Griffin slumped to the ground and died. Having drowned on dry land, the coroner later reported.

In skimming the coroner’s report that Saanvi squeezed out of an old classmate, Ben rather remarkably noticed that Griffin lived for exactly the same amount of time he was “gone” — 82 hours and eight minutes. By mathematician Ben’s math, the Flight 828 passengers’ own expiration date is thus June 2, 2024 (which sadly will land outside of May sweeps that year). Olive confirmed the date as interpreted by the peacock, the Gemini Twins and Cal’s wood dragon. But for good measure, Cal showed up to really drive the point home, toting a new drawing of his, Dad and Auntie Mick’s headstones… all dated June 2, 2024.

Oh, and Grace is pregnant, though probbbbbbably not by Ben, seeing as only six weeks (!) have passed since the Flight 828 passengers returned.

As the finale drew to a close, stressed-out Saanvi arrived for her first appointment with a colleague-recommended shrink — and it’s the Major! Jared meanwhile showed up at Mick’s place to confront Zeke about his “drug buy,” and the boys got into a donnybrook. Zeke whipped out the gun he bought and explained why, at which point Jared reached for the pistol. Michaela dashed up the stairs to “STOP HIM,” only to enter the door just as a shot rang out off-screen. Does Zeke have a messy-looking manslaughter to explain, so soon after his and Mick’s lingering hug?

What did you think of the yet-to-be renewed Manifest‘s finale?