Worlds collided a final — and we do mean final — time in Counterpart‘s Season 2 and likely series finale this Sunday night. Who died during this closing crisis? And did Indigo succeed in infecting our sidewith the flu?

Having executed both Managements and then appropriated a communications gizmo from each side, Mira dictated a message to be immediately disseminated to the OIs in each world. In short, it said that this grand experiment of attempting diplomacy between worlds had failed, so we are going to seal off the crossing again, and for good. Everyone took the message at face value, and prepared to deport any detainees to their proper sides.

While Howard awkwardly reunited on our side with his Emily, Temple leaned on Clare to procure some kind of intel on the flu release plan from Spencer. After much prodding (and being asked what his plan is, stuck  on this doomed side of things), he shared that Mira has a remote cabin, from which minions infected with the flu will disperse in all directions. Howard Prime interrupted Emily and Howard’s reunion to deliver the update, and Emily said she could lead a team to the cabin, remembering where it was located on the other side. Howard insisted on tagging along, and during the ride got to share his “war story” of getting shot/tortured with his admittedly impressed other.

Arriving at the cabin, the place seemed deserted — save for Indigo member Emma, who had been left behind with the task of blowing the place and all evidence to smithereens. Emma though seemed to be having a crisis of conscience, so Emily decided to approach and talk to the young woman. Emily seemed to get through to Emma, assuring her that she could pursue the life she dreamed of. Emma in turn shared the plan to have infected assets disperse from a train station at 11 pm. Alas, after Emma surrendered her gun and s Emily was leading her away from the house, Emma purposely stomped on a trip wire and blew the place. The Howards rushed to Emily’s side and raced her to the hospital, but she was later pronounced dead from her wounds. 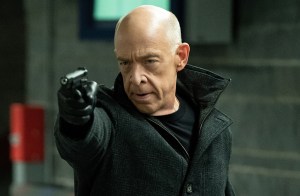 Howard found Prime outside and drew a gun on him, forcing his other to his knees for execution. Howard of course couldn’t go through with it, even though (but perhaps because) Prime said he himself would. Instead, Howard lowered his gun and handed off the message that Emily scrawled en route to the hospital, alerting of the 11 pm train station flu launch. Later at the station, just as boarding tickets for a variety of countries had been handed out to the Indigo agents, Prime showed up, Glock a-blazing. He gunned down each and every one of ’em and, without so much as missing a beat, dropped his gun in a trash bin and moseyed away.

In the aftermath of the flu launch being averted, Temple thanked Clare by offering her a gig at OI, while also keeping secret from her dad her duplicitous role in things. (Clare then upped the ante by insisting on Peter getting his job back.) Howard Prime grabbed Baldwin to head back to the other side before the crossing was shut down.

Meanwhile in the other world, Emily Prime went looking for Ian, only to find a note he had left hinting at the secrets he had kept and his compromised status/why he won’t be seeing her for a while. But as a make-good, he left her with Mira — meaning, a tracker to follow a bug he placed on one of her Management communicators. Some time later, we saw Mira arrive at her apartment and switch on the light, getting pricked in the process a la Emily Prime during Season 1. Except in this instance, Emily made sure the dose was lethal, she gloated from the living room, where Mira gasped, stumbled and eventually crumbled to the floor, dead. 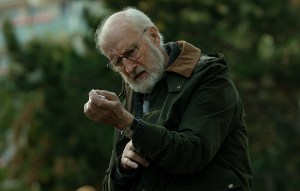 Was Indigo’s grand “drop a grenade and shut the door” plan completely thwarted? Perhaps not. In the very final scene, we saw Yanek, newly reunited with his grandchildren on our side, taking one to the park, where he began top cough violently. He then looked at his hand and arm and saw nasty splotches, and recalled Mira injecting him with something on the other side. Yanek then collapsed to the ground, dead, while his granddaughter played and mingled with kids nearby….

What did you think of Counterpart‘s Starz finale?