The last time Rachelle Lefevre led a TV drama, she was trapped Under the Dome in the mysteriously encased town of Chester’s Mill.

Fortunately, there are no domes to be found in Lefevre’s new series, Proven Innocent, but it does take place somewhere equally stressful: the courtroom. (Seriously, Chester’s Mill will start to look pretty inviting after going up against Chicago’s toughest prosecutor.)

Proven Innocent made its debut on Fox Friday night — but before you tell us what you thought of Episode 1, let’s recap what went down in the premiere:

Lefevre stars as ambitious attorney Madeline Scott, who works with the Injustice Defense Group, a law firm “solely dedicated to the issue of wrongful convictions.” As we learn in the exposition-heavy first act, Madeline and her brother were wrongfully convicted as teenagers for the murder of their friend, Rosemary, but got released once the conviction was overturned.

Madeline’s biggest foe in the courtroom is state’s attorney Gore Bellows (Frasier‘s Kelsey Grammer), who was responsible for her wrongful conviction when she was younger. Now, Bellows is running to be elected the attorney general of Illinois, and Madeline is determined to take him down by exposing his many years of corrupt law practices. 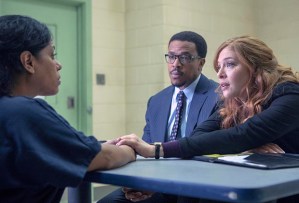 In Friday’s premiere, Madeline and her associates revisit one particular case that they believe ended with unwarranted jail time. Lucia Rincón was convicted of burning down her house with her own child inside, and Bellows successfully vilified her during her initial trial. But Madeline and her team suspect that Bellows hid all sorts of important evidence during the trial, and Lucia deserves to be released as a free woman.

I’ll spare you the legal minutiae of this episode, but it’s the verdict that matters most, anyway: Lucia does get released from prison, after it’s revealed that Bellows employed a highly prejudiced translator to work on Lucia’s case and got a falsified statement from her husband at the time. Though Bellows seems like quite the Goliath in Chicago’s legal world, Madeline’s team has at least exposed some of his office’s corruption before the premiere is through.

Of course, Madeline has some other issues on her plate, too. She agrees to go on a date with a journalist named Dylan, who seems to be playing her so that he can get the best scoop. Plus, Madeline’s brother gets fired from his job as a local soccer coach, after he punches a former high school classmate who thinks he really did kill Rosemary all those years ago. (Before the hour is up, Madeline starts re-investigating Rosemary’s murder in her own house, plastering one wall with photos of suspects and newspaper clippings from that year.)

The biggest curveball, though, is when Madeline finds out that her brother was actually dating Rosemary at the time of her death (though they kept their relationship a secret from everyone else at school, including Madeline). A shocked Madeline weeps to her brother that this information could ruin them if anyone finds out that he and Rosemary were together; if the secret gets out, everyone will think they’re guilty again.

The premiere ends with a brief flashback to the day Rosemary died. Madeline was the one to discover her best friend’s body that afternoon — and, interestingly, Madeline’s brother was already at the scene of the crime, though it’s not totally clear if he actually had anything to do with Rosemary’s death.

OK, your turn. What did you think of Proven Innocent‘s premiere? Grade the episode in our poll below, then drop a comment with your full reviews!