Nearly two decades after introducing the world to animated heroine Kim Possible, Disney Channel is giving the teen savior her most dangerous mission yet: a live-action movie.

Premiering tonight at 8/7c, Kim Possible centers around the titular crimefighter (played by Sadie Stanley) and her loyal sidekick Ron Stoppable (Sean Giambrone) as they face off against their arch nemeses Dr. Drakken (Todd Stashwick) and Shego (Taylor Ortega).

As if saving the world isn’t enough of a chore, they also have to navigate high school, which includes sparring with mean girl Bonnie (Erika Tham) and defending friendless newcomers like Athena (Ciara Wilson). Fortunately, all of Kim and Ron’s allies are also coming along for the ride, from tech whiz Wade Load (Issac Ryan Brown) to Kim’s mom (Alyson Hannigan) and grandmother (Connie Ray).

Below, Stanley and Giambrone tell TVLine what fans of the classic cartoon can expect to see when it comes to life tonight: 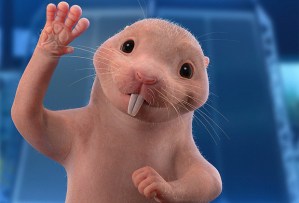 RUFUS | The iconic naked mole-rat comes to life via the magic of CGI, and he’s even more adorable than you remember him. “I feel like I formed a bond with him, even though I couldn’t actually see him when we were filming,” Giambrone says, adding that he’s in awe of Nancy Cartwright’s ability to bring Rufus to life with her voice. As for Stanley, she says, “I love Rufus’ little belly. I don’t know why that’s my favorite part, it just is.” (Side note: If you’ve never seen a real-life naked mole-rat, give it a Google sometime. They look like little hairless nightmares.)

CLASSIC LYRICS | When Kim Possible first aired in 2002, lyrics like “beep me” and “if you want to page me” made perfect sense. Seventeen years later? Not so much. “There was talk about possibly updating the lyrics,” Stanley says, “but the song is so iconic and the fans love it so much. We didn’t want to mess with that.” 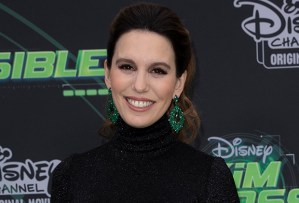 THE OG K.P. | “The way they introduce her is so perfect,” Giambrone says of Christy Carlson Romano (aka the original voice of Kim Possible), who makes a highly anticipated cameo in the movie. Adds Stanley, “I keep referring to her as an angel, but that’s what she is. She was so funny, and we had so much fun working together. As soon as I was cast in the role, she really threw her full support behind the movie.”

LEGIT ACTION | You’d be hard-pressed to find a DCOM with more explosions, hand-to-hand combat and overall action than Kim Possible. Stanley began training for the role back home in South Carolina with her brothers, both of whom are black belts, shortly after being cast. “There’s a deleted scene where Sadie actually flipped my stunt double over her back,” Giambrone recalls. “It was really impressive.”

Are you checking out Kim Possible tonight? Hit PLAY on our exclusive behind-the-scenes featurette below, then drop a comment with your thoughts.