It may not have actually been Valentine’s Day in Gotham this Thursday, but Jim Gordon’s love life sure took some interesting turns. 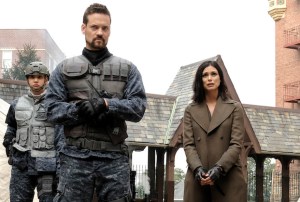 At the close of an episode in which the decrepit city’s top cop squared off against his old Army buddy, Eduardo Dorrance (who it turned out had found Lee and was holding her hostage), Gordon realized in the nick of time that his ex had a mind-control chip in her noggin, just like the one they had plucked out of Nygma. Alas, no sooner was Lee made right and she and Jim began reconnecting, Barbara showed up at the GCPD to not-so-discreetly share some news:

“Do you remember the good time we had the other night…?” she said to Jim, with a nod to where they enjoyed a stress-relieving rogering. “I’m pregnant.” (Oh, and in the name of proper manners: “Good to see you, Lee. Long time.”)

What is to come of this reveal? “A baby, probably!” laughs Barbara’s portrayer, Erin Richards. “That’s usually what comes out of a pregnancy.”

“What happens is actually pretty unifying in a way, which is I guess a bit of a shock,” Richards tells TVLine. “Because that incident could either completely break everything, or unify [people].” 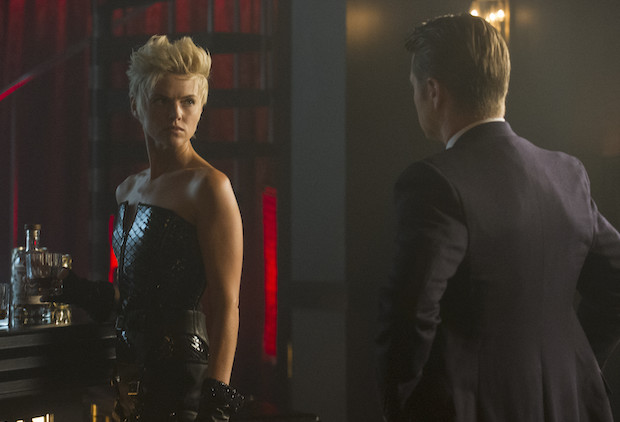 While many Gotham viewers have patiently waited for Lee to resurface during the Fox drama’s final season, others have steadfastly held out hope for a rekindling of the Jim/Barbara romance, off-kilter as his original fiancée may now be.

“I think a lot of people have [wanted that],” Richards ventures. “I think that for a while it was not in the cards, but for Season 4 and 5, we wanted Barbara to have a redemption.” Her recent and tentative alliance with Gordon, coupled with this pregnancy news, will not only pave the way for that, “It sort of leads to a Barbara/Jim/Lee triangle — and a kind of coming-together of Barbara and Lee that wouldn’t have otherwise been possible,” says Richards.

Barbara Kean winding up on the right-ish side of things as Gotham wraps its five-season run would mark but the latest turnabout for the character, who at first was conceived as simply Jim’s socialite sweetheart (albeit one with sapphic secrets). But as showrunner John Stephens shared this month at Gotham‘s farewell TCA panel, during those early episodes “we were like, “Erin is so much more interesting than the character we’re writing…. So we let her energy really inspire us.” Added fellow EP Danny Cannon: “We got an ounce of what she could do, and it was being limited just by being Jim Gordon’s girlfriend. So when it was floated out there, ‘What if she was a villain?,’ it was a moment of silence where everyone just went yes.” (Responding to her bosses’ words, Richards beams, “It’s always nice to hear stuff like that, because nobody ever feels like they’re as good as other people see them.”) 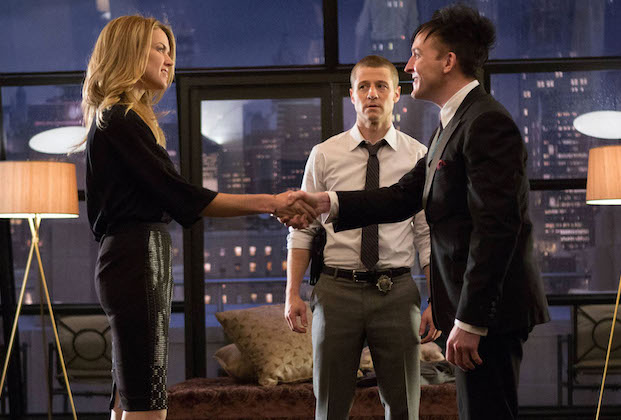 How far has Barbara come since the pilot? Following her first breakup with Jim and then a near-death experience, Babs by Season 3 “was batsh–t crazy. It was the pinnacle,” Richards reflects. “I’ve been so grateful for that journey of hers, because on any TV show where you’re playing the same character, there is the danger that there isn’t that kind of progression or an arc. I’m really happy that they write that way for me, because I love change.”

Richards laments that she hasn’t cued up those very first episodes “in a long while,” but said, “I look back at pictures of me with that long blonde hair and I’m like, ‘Who is that?!’ It’s weird.”

And yet Richards does suggest that in that vision of a Perfect Wife, one could have spied hints of the rebellion to come. “I think there were elements of who she became in that first version of her — but it wasn’t like anything I imagined!”