An avant-garde challenge on Wednesday’s episode of Project Runway All Stars revealed which of the remaining designers have pure imagination… and which may not have any at all.

Following a trip to Broadway’s Charlie and the Chocolate Factory: The Musical, the nine contestants were tasked with using their imagination to “invent something never seen before in fashion. It could be a practical but surprising use for a garment, an unexpected innovation, or an inventive way to wear something new.” (And to give you an idea of how long ago this episode must have been filmed, Charlie ended its run in Jan. 2018.)

Much of the episode was devoted, and rightfully so, to the construction of Anthony Ryan Auld’s “dry-erase coat,” a brilliant vinyl piece inspired by his two deaf friends. Dmitry Sholokhov didn’t think much of Anthony’s creation (“Who needs to write on their clothes these days? If you think intellectually about it, it’s like, ‘What the f–k?'”), but the judges felt otherwise. They lavished it with phrases like “totally innovative” and “super functional,” though I think guest judge Andrew Rannells summed it up best: “It’s the craziest-looking coat ever, and I love it!” It was a well-deserved win, haters (aka Dmitry) be damned. 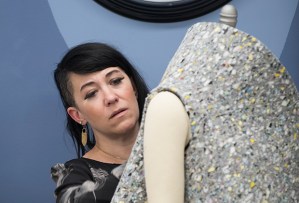 That said, Michelle Lesniak gave Anthony a run for his money with a stunning “sensory depravation jacket,” which was inspired by her friend’s autistic child. Constructed with carpet padding, it was an eye-catching mini dress with an additional piece that enables the wearer to close herself off if she’s feeling anxious. “Simple and pure,” indeed.

As for this week’s elimination, the writing was on the wall fairly early for the bottom two: Sean Kelly was forced to whip up his back-up dress at the last minute, resulting in a look that left guest judge Anna Camp “confused,” while Django Steenbakker was warned early in the episode that his invention “doesn’t sound like something we’ve never seen before.” Had he been more receptive to Anne Fulenwider’s feedback, Django might have saved himself from elimination.

Do you think Django was the right designer to get the boot? Drop a comment with your thoughts on this week’s Project Runway All Stars below.