The truth is finally out: On Wednesday’s Chicago P.D., Burgess learned that her ex-fiancé Ruzek is dating Hailey Upton after she walked in on her colleagues sharing a flirty moment. And Burgess certainly didn’t seem happy about it — at first. (Did you notice the way she shrugged off Ruzek’s hand from her shoulder while they were undercover?)

Later, Upton attempts to broach the subject in the locker room with Burgess, who insists that she’s good. “I’ve been wanting to tell you,” Upton persists. “It just sorted of happened.”

“I don’t really want to talk about it. Not now,” Burgess replies. 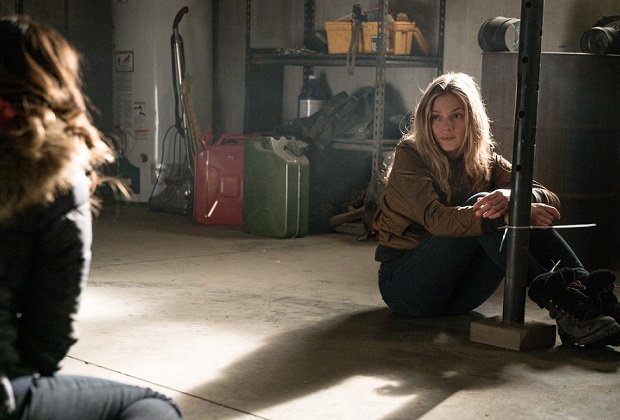 Then the pair are abducted by two gun suppliers/scam artist robbers, and Upton is beaten bloody, while Burgess is threatened at knife point. Thanks to some ingenuity, Burgess is able to break her twist ties, but Upton is still chained up. The two work together to signal the team to their location and stave off the bad guys. The women eventually make it out alive and have a talk over whiskey.

Upton explains that she once dated a sergeant, and after she was promoted, everyone just assumed it was because of her boyfriend. “I learned the hard way that I have to keep my personal life private,” she says. “So I wasn’t too excited about everyone finding out about Adam and I.”

“I get it. We’re good, Hailey,” Burgess sincerely replies, clinking their glasses. And it probably doesn’t hurt that a political consultant (played by Younger and The Originals‘ Charles Michael Davis!) asked her out earlier in the episode.

Upton, Burgess and the rest of the Intelligence unit also get a not-so-thinly veiled warning from Voight. “We all have private lives… but when we are here working, we are one team with one purpose,” he tells them, adding that “whatever’s going on at home, good or bad, has to stay at home” so that cases don’t go sideways again.

P.D. fans, what did you think of Burgess’ reaction to the romantic revelation?