In a Season 16 episode that seemed like it was simply(/shamelessly) going to reference a cold case that Special Agent Ziva David had chipped away at back in the day, longtime viewers instead got much more.

When a young girl was found on the streets and determined to be the daughter of a Navy recruit who went missing 10 years ago and then was believed to have died in a suicide, Bishop and Torres discovered that someone continued to investigate the case even after it was turned over to the local cops (against Gibbs’ wishes, mind you). That intrepid probie was none other than Ziva David (spied in her own surveillance photo above), who had taken a special interest in the case after getting an earful from Boss for letting it get away.

Bishop at first withheld Ziva’s off-book investigation from Gibbs, only to get her earful of her own when that non-too-small fact came to light, after it was discovered that Ziva kept a small office in the suburbs, situated behind someone’s house. There, Bishop found all kinds of journals, many in Hebrew — and one tied directly to Ziva’s time spent working the kidnapped pregnant recruit’s case. Taking note of Ellie’s investment in “learning” from the esteemed Special Agent whose desk she would occupy, Gibbs reminded her, often, of Rule 10 — to never get personally involved in a case.

Bishop, though, was determined to see this one through and ultimately read to the primary kidnapper a letter that the kidnapping victim’s mother had dictated to Ziva before dying of cancer. But when the perp was caught and afterward admitted to the hospital, and Bishop went to deliver that closure, the man shrugged that “somebody already came here and read it to me.” And that someone promised to “haunt [his] dreams.”

A curious Bishop then raced to Ziva’s secret office, where she saw that a coat that had been on a hook was moved, and a scarf was curled into a ball on the desk. Underneath, Bishop found a note: 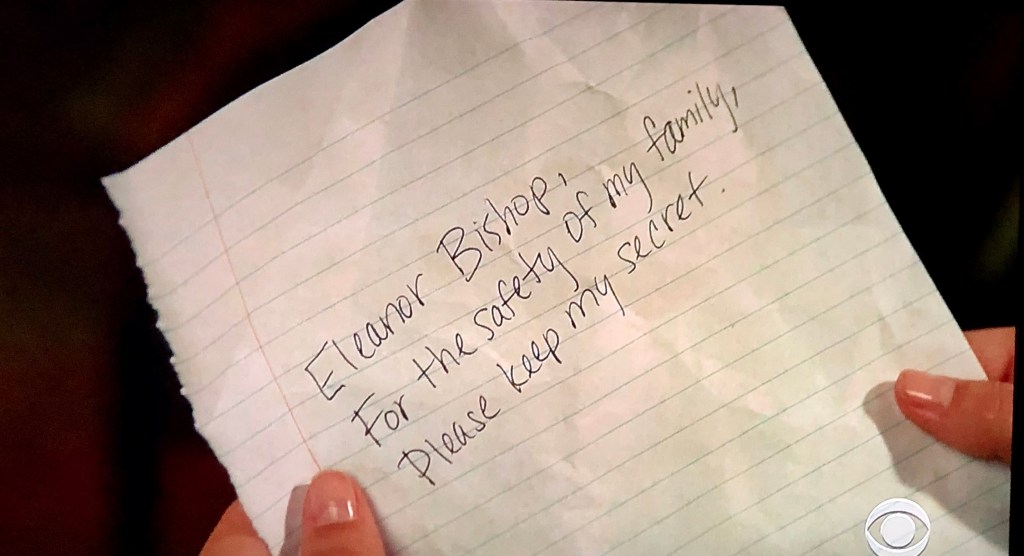 Of course, DiNozzo’s very final episode/exit storyline strongly hinted that Ziva had not died but was in hiding (a theory that was all but confirmed by the then-showrunner). But it’s nice to see hard proof, yes?