This is the precinct where it’s about to happen: Brooklyn Nine-Nine has cast self-proclaimed super fan Lin-Manuel Miranda to guest-star in an upcoming Season 6 episode, TVLine has learned.

Miranda is set to play David Santiago, Amy’s brother and rival. He’ll appear in Episode 9, “The Golden Child,” which is set to air on Thursday, March 7 (NBC, 9/8c). 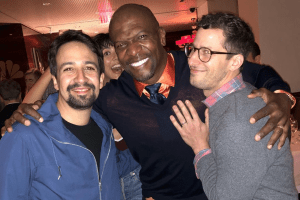 The Hamilton creator was one of a handful of famous folk — also including Seth Meyers, Mark Hamill, Sean Astin and director Guillermo Del Toro — who voiced their support for Brooklyn Nine-Nine following its cancellation at Fox. Less than 48 hours after it was saved by NBC, Miranda celebrated with the cast at the network’s annual Upfronts dinner (pictured right). Then in December, Miranda and Meyers toasted B99‘s second life on Late Night (which you can watch below).

Back in May, series co-creator Dan Goor told TVLine that the hope was to have Miranda and the other “Guardians of the Nine-Nine” appear during Season 6. “It would be a dream to have all of them, let alone even one of them,” he said.

Are you looking forward to Miranda’s B99 guest stint? Get an exclusive first look at his debut in the photo above, then hit the comments with your reactions!