What kind of a person would willingly skin a zombie and wear its face like the grossest Halloween mask of all time? “I suspect some vessel filled with a chunky salsa of abnormal impulses and metastasized rage,” suggested Eugene in Sunday’s midseason premiere of The Walking Dead. And before the episode was over, we’d heard from not one but two such vessels, the rare Whisperers who had occasion to speak in raised voices. If you read on, we’ll not only go over their introductions, we’ll follow Negan on his walkabout, eavesdrop as Rosita shares a secret (with more folks than she intended!) and reveal which of our survivors wound up chitchatting their way into a trap. 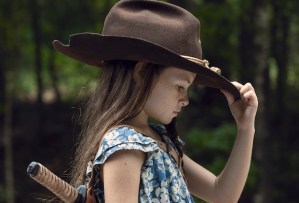 ‘I THOUGHT YOU WERE SMARTER THAN THIS… GUESS NOT’ | After an opening in which Daryl, Michonne & Co. managed to escape (with relative ease) from the graveyard with an injured Eugene, plus Jesus’ corpse, “Adaptation” cut to Alexandria, where a newly-free Negan sampled a tomato — again with the produce! — and pilfered Judith’s compass before the little girl caught him trying to hop the fence and vanish into the woods. How ’bout she just look the other way and let him go? he suggested. “How ’bout no?” she replied. Love that kid. Although it wasn’t long before the baddie’s promise not to hurt anyone, not even if they tried to hurt him, convinced the youngster to turn him loose. She even let him keep her compass. “It’ll help you find your way,” she said, adding that if he dared to come back, she wouldn’t hesitate to shoot. 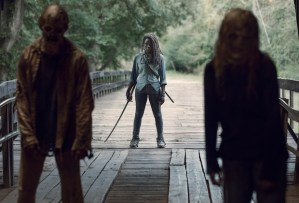 ‘MAYBE WHAT HAPPENED WAS BOUND TO HAPPEN’ | Meanwhile, as Tara sent out search parties in hopes of bringing Jesus & Friends back to the Hilltop, the survivors of the Whisperers’ attack slowly made tracks toward exactly that destination. Along the way, Michonne thanked Daryl for trying so hard to find Rick’s body… and for “after,” whatever that meant. Shortly, Dog sounded the alarm. But were the approaching walkers “the living kind or original recipe?” Eugene wondered. To find out, Daryl started shooting them in the leg. Some, it turned out, were just zombies; others, Whisperers. Before our heroes were forced to beat a hasty retreat, one of the masked villains — a scared-s—-less teenage girl (Cassady McClincy, Castle Rock’s Young Molly) — surrendered and was taken along for questioning. But “you try anything,” Michonne warned, and “you won’t have to pretend” anymore to be the undead! 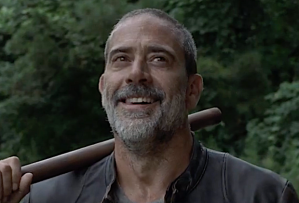 ‘HI, PUPPY’ | Elsewhere, Negan was busy savoring the fact that he had a blue sky overhead for a change instead of the ceiling of his cell. But it wasn’t all sunshine and daffodils for Glenn’s murderer. His supplies were lost to a random walker attack, then a drink of lake water left him puking on his shirt. Nonetheless, he tried — valiantly, even — to keep his promise to Judith while shopping for replacement threads. Though he was accosted in the store by wild dogs, he did his damnedest to escape without harming a hair on their heads. Later, he arrived at the remains of the Sanctuary, whistled that melody that we all hoped we’d never hear again, and with a glance at Judith’s compass, decided that back in his cell was where at this point he really belonged. 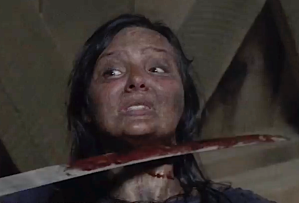 ‘NO MORE BULLS—!’ | No sooner had Daryl, Michonne, Aaron, Eugene, Magna and Yumiko gotten through the gates of the Hilltop with Jesus’ body than Tammy Rose was all over Tara, going on about how “people are gonna want justice for this… We’re gonna look to you for that.” Sheesh! Give her a second, lady! When Daryl, Michonne and Tara tried to question their prisoner, all they got was a blubbering mess of a girl who insisted that her group had been good people, they didn’t have names, blah, blah, blah. Useless. Tara would try again in the morning, but, noted Michonne, it would have to be without her — she had to go warn Alexandria of this weird new threat. In a moment alone with Daryl, Michonne then pointed out what a risk it was to keep the girl there. If the kid didn’t talk the following day, “you know what you have to do,” she said. 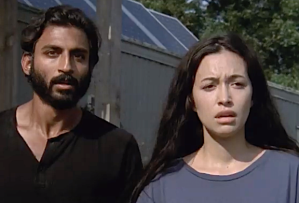 ‘DOES ALCOHOL ALWAYS MAKE YOU FEEL THIS BAD?’ | After Siddiq treated Eugene’s injury at the Hilltop’s infirmary, the brainiac seized a moment in private with Rosita — well, semi-private (the doc was still nearby) — to share how spooked he’d been by Jesus’ untimely demise. If he, too, unexpectedly met his maker, he didn’t want to do so never having confessed to her that he… Aaand before he could spit out his declaration of love, she’d run outside and vomited. When Siddiq followed, concerned for her health, she admitted — as Eugene eavesdropped through the window — that when the two of them had been “having fun, before Gabriel,” she’d gotten pregnant. (So what is that, a love quadrangle now?) Nearby, Henry apologized to Daryl for getting thrown in the drunk tank. He’d just been looking for his place at the Hilltop, the teen said. Like, “who am I here?” 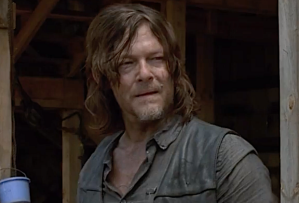 ‘WALLS DON’T KEEP YOU SAFE’ | Before Michonne set off for home, Daryl grumbled about his discomfort with being the one to decide the prisoner’s fate. Why did it have to be him? “Because you’re the best damn judge of character I know,” Michonne said, adding that without Jesus or Maggie, the Hilltoppers were gonna need him. (Some vote of confidence in Tara, Michonne! Wow.) Later, as Daryl angrily questioned the young Whisperer, Henry grew more and more upset in his own cell. “She’s just a girl!” he cried. But a girl who seemed intent on offering up only tearful BS about herself, her mother, their group… About the only thing she said that sounded legit, albeit nuts, was their reason for traveling with walkers. “They protected us,” she explained, “so we protected them.” After Daryl gave up — huffing that Henry’s place was in his cell till he wised the hell up! — the gruff babysitter listened in as the prisoner spoke with her cell-block companion. She even admitted that her name was Lydia (aka Carl’s love interest from the comics). 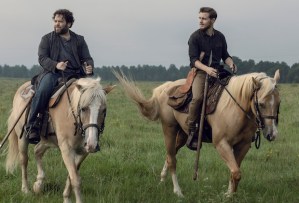 ‘I KNOW YOU SAID YOU’D SHOOT, BUT DAMN!’ | Speeding back toward Alexandria on a motorcycle — was that Daryl’s, after all this time? — Negan was sent flying by a pistol-packing Judith. She’d warned him that she’d shoot if he returned, she reminded him. “You sure as s— did,” he replied. Hey, “language,” she snapped. “I’m a kid, a–hole!” OK, I don’t just love Judith; against all odds, I love this potty-mouthed tag team. But I digress. She’d let him return to his cell, as was his intention, but what then? “I will let you know,” he said, “when I know.” Back at the Hilltop, Magna bonded with Enid, who was worried about Alden. Her boyfriend, unaware that Daryl & Co. had returned so long ago that Jesus had since been buried, was still out looking for them with Luke. Actually, she didn’t even know what to call her relationship with the former Savior, it was so new. “I’ve got one of those, too,” said Magna, adding that Alden would be safe with Luke. Would he, though?

‘THAT’S WEIRD’ | As Alden and Luke searched for the survivors that they thought were missing, a fine bromance seemed to be sparked. Alden decided to call the newbie Professor — but who’d be his Mary Ann? — and Luke concluded that, since he was musically inclined and his pal sang, they could rock the upcoming fair as a two-man band called Symphony of Awesome. They even believed that they were closing in on the missing persons when they began following a trail of arrows that Yumiko had left. Only Yumiko hadn’t left them, they were a trap set by the Whisperers’ leader, Alpha (Samantha Morton — maybe you’ve heard she was joining the cast). As the episode came to a close, the dynamic duo was surrounded by walkers that were actually Whisperers. “Trail ends here,” said Alpha, training a shotgun on them.

So, what did you think of the midseason premiere? Alpha and Lydia’s introductions? Negan and Judith’s oddball friendship? Grade the episode below, then hit the comments.