One Day at a Time‘s Season 3 finale features a major milestone for Penelope — but not before she is visited by the ghosts of boyfriends past.

At Victor and Nicole’s wedding, Penelope has visions of how her life could have turned out. In each vision, she is joined by the spirit of her father Berto (recurring guest star Tony Plana). First, she sees herself up at the altar, set to remarry Victor. Then at the reception, she has a second vision where she has just married Mateo, but there’s still no spark between them.

What at first seems like a third vision is in fact reality. Penelope is reunited with ex-boyfriend Max on the dance floor. They catch up and acknowledge how much they miss each other, but ultimately go their separate ways. Afterwards, Berto asks Penelope why she couldn’t make things work with the hunky EMT. “Everyone keeps telling me I’ll be happy when I find someone, but I’m already happy, and I have no regrets,” she says.

A few days later, Penelope passes her board exams and graduates from nursing school. The entire family, including her brother Tito, is there to cheer her on as she accepts her diploma. When she returns to work, she has a white coat and her own plaque on the door. There, she receives a call from Lydia, who has traveled to Cuba with Dr. Berkowitz to scatter Berto’s ashes at sea. 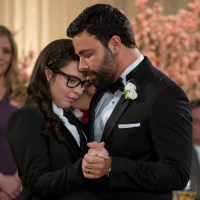 Victor and Nicole’s wedding day also dredges up plenty of emotions for Elena, who still hasn’t forgiven her dad for walking out on her quinceañera. She gives an insincere toast at the reception, then tells Alex what she really wanted to say in front of Dad’s extended family:

“You might remember me as the girl who was abandoned by her dad during the father-daughter dance portion of her quinces. Papi, I know you’re trying, but that doesn’t erase all the bad stuff that happened, and everything is not OK yet. And today it was me making sure everyone was comfortable… and me saying nice things about you… and me showing up on your big day when you didn’t show up to mine. I should not have to be doing all of the work. The bigger person shouldn’t have to be the kid.”

Once Elena and Alex return to the party, Victor gets up and acknowledges how he did wrong by his daughter in the wake of her coming out. He then asks Elena to join him for a make-up father/daughter dance. All is not forgiven, but it’s a step in the right direction. 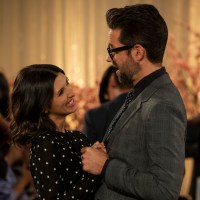 Last but not least is Schneider, who lights up when Avery surprises him at the reception. It turns out Lydia called her and said “you should never give up on an Alvarez.” (D’aw!) Schneider apologizes to Avery for how he treated her during his recent relapse, and says that the 37 days he spent without her were far more difficult than his 30 days he’s spent maintaining his sobriety. Avery admits that he scared her, but she’s willing to give their relationship a second chance.

And now, for some additional thoughts on Season 3 as a whole…

* “The Funeral” featured a great payoff to the long-standing feud between Lydia and her estranged sister Mirtha, which culminated in a duet between Rita Moreno and Gloria Estefan. We are not worthy.

* The #MeToo dialogue that took place in Episode 2 was especially thought-provoking. Elena and Syd revealed that they’d been harassed by a group of guys who followed them and tried to provoke them into kissing for their own amusement. Later, Penelope told her family that she’d been assaulted by an Army superior who forced her hand upon his genitals. The discussion not only served as a teachable moment for Alex, but also for Lydia, whose antiquated “every ‘no’ is a ‘yes’ in disguise” philosophy needed to be challenged.

* Additional standout episodes included “The First Time” (in which Elena and Syd took their relationship to the next level) and “Anxiety” (which focused on the stigma surrounding anxiety and those who suffer from it). “Nip It in the Bud” also deserves an honorable mention for Lydia getting stoned at the opera. 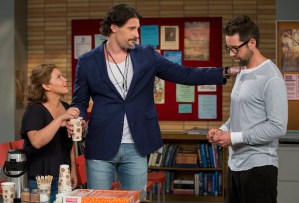 * In Season 2, Justina Machado was the undisputed MVP. In Season 3, that honor goes to Todd Grinnell. He was terrific in the final stretch of episodes, beginning with the arrival of Schneider’s dad (a perfectly cast Alan Ruck) in Episode 10. We then watched as Schneider threw away eight years of sobriety and nearly lost everyone he holds dear.

* Revealing Schneider’s first name at Alcoholics Anonymous was a nice touch. The Powers That Be named him Pat, after the late Pat Harrington Jr. — aka the OG Schneider. 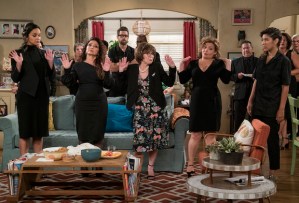 * Once again, the writers did a superb job referencing the current political administration without ever referring to President Trump by name. The first shout-out came as a total shock when Estrellita echoed POTUS’ “Make America Great Again” motto at the end of “The Funeral.” Then in “Drinking and Driving,” Lydia told Penelope to keep quiet until the president was done speaking, only to realize that what she’d been watching was in fact a hemorrhoid commercial.

What did you think of the One Day at a Time finale? And what about Season 3 overall? Weigh in via the following polls, then hit the comments to flesh out your thoughts!