Siblings Ben and Michaela recently trekked to a cabin in the Catskills to find an AWOL Cal, only to then be barged in on by a scruffy, ice-encrusted stranger who immediately collapsed from hypothermia. When this man, Zeke Landon, came to, he explained that he had been trapped in a cave for two, cold weeks — when in fact he had been missing for a year.

“I loved that entrance,” series newcomer Matt Long raves. “I was really thankful to have that, it was really cool.”

In the weeks since, Michaela has schooled Zeke on the similarly strange phenomenon experienced by the passengers of Flight 828. And now with the introduction of “the wolf” aka a van driver who somehow survived being underwater for 80 hours, it appears other sorts of “time-jumpers” are out there.

TVLine spoke with Long — whose previous TV credits include Private Practice, Mad Men and Jack & Bobby — about Zeke’s state of mind, how his bond with Michaela will soon ruffle feathers, and the twists still to come in the freshman drama’s final two episodes (airing Mondays at 10/9c). 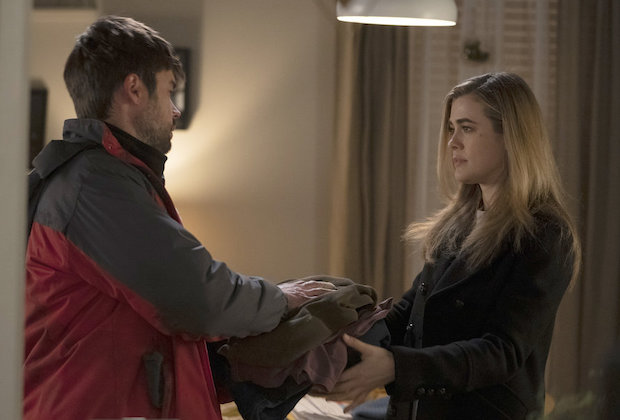 TVLINE | Is it safe to say that Zeke is a true believer now?
Yeah. Yeah. I think he didn’t really have any choice, because of what he had already experiences in the cave. He had such a connection to that picture of Michaela in a magazine — there was a supernatural feeling about it that kept him going. And then he immediately started sharing callings with Michaela. I feel like he’s always been a believer but he still doesn’t understand it. He has nothing but questions about it.

TVLINE | How would you compare his mindset when trapped in the cave versus now?
I think now there’s a lot more confusion, a lot more unsteadiness. [The cave] was about survival, the past – he was out there to visit his [late] sister’s monument when he was taken by surprise by a snowstorm that locked him into the cave. And I think it was probably pretty simple for him those two weeks, staying alive moment to moment. But now, everything has been turned upside down. The longer we go with his story, the more questions arise. A lot of the characters have mentioned to him that he should contact his family, which is complicated for him, but in this next episode he does make an effort — in his own way — to contact someone. And while his intentions are good, he goes about it the wrong way and he gets into some trouble. But then he and Michaela bond over some shared experiences, and she helps him, again, deal with things. 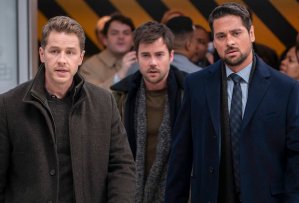 TVLINE | Zeke does have this very special bond with Michaela. What happens once Jared gets a sniff of him?
[Laughs] You’re going to see this Monday night. When Zeke meets Jared, Jared is immediately hostile and doesn’t trust him. I don’t understand why, but then Ben tells me that they used to be engaged. Jared doesn’t trust me because I think Zeke maybe carries this “air of mystery” about him.

TVLINE | Michaela admittedly hasn’t been very forthcoming about meeting and keeping hidden this not-unattractive stranger.
I mean, I look pretty rough. [Laughs] I’ve been joking around with Melissa [Roxbrough] that she’s got a thing for homeless guys. I love that about this character though, I’m just so thankful to have that aspect of him.

TVLINE | Have you ever looked this shaggy for a role?
No, no. I was talking with someone before about how I’ve never looked like this and I love it so much. It’s so refreshing.

TVLINE | Like, I knew you were joining the show, but when Zeke first appeared, I didn’t make the connection that it was you.
That’s awesome, man. I love it. Actors always want to do things that let them be seen in a different light, to show a different side to them. I’m a huge outdoorsman, my whole family and I go camping all the time, I used to go backpacking…. So I love that aspect of Zeke. I love the fact that I look so rough and when I came in I was soaking wet, my hair matted down….

But to get back to Jared, I think he’s probably jealous. Even though he doesn’t know anything about Zeke yet, he knows that Michaela spent a lot of time with him in the woods, he doesn’t know what happened, he doesn’t know what went on…. Meanwhile, she’s completely trusting Zeke, he’s living in her apartment…. These are huge red flags for a guy who’s in love with a girl, to see another guy doing this stuff. Plus, Michaela and Zeke both have callings, and Jared is left out of that experience. That’s a huge spiritual awakening in a way that he hasn’t had. But I mean, I get it — there are tons of reason for Jared to not trust Zeke and to wonder what in the world is going on.

TVLINE | Zeke thus far has been doing a lot of listening, processing new information. Will he become more active in these last two episodes?
Definitely. There are some huge cliffhangers that are coming, for multiple characters and for all of us overall. Zeke is really active in a couple of them, including at least one of the biggest ones.

TVLINE | How does the Feb. 18 finale leave things?
There are some big answers that come, but with those answers come some really big questions — as well as some big problems for us to deal with.

TVLINE | Lastly, do you think Bobby McCallister will be able to clean things up when he becomes president 12 years from now?
[Laughs] Man, I hope! Isn’t that something, [Jack & Bobby] was 15 years ago…. I don’t know, man, but I hope he does!