New York might be the city that never sleeps… but Abbi and Ilana’s Broad City adventures were never meant to last forever.

Comedy Central’s free-wheeling hipster hit is signing off this year after its current fifth season (airing Thursdays at 10/9c), and stars/co-creators Abbi Jacobson and Ilana Glazer tell TVLine they decided to end the show because they’re moving into a new phase of life now: their thirties. “The show was always really about what New York is like in your twenties, from these two specific points of view,” Jacobson says. “But I think it didn’t really click in that that was what the show was about until we were in our thirties… It’s supposed to exist in your twenties. It’s a flash-in-the-pan kind of thing, and we wanted to stay true to that.” 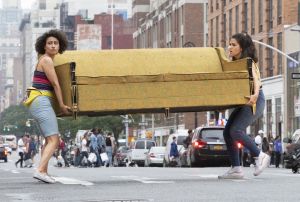 Ending the show now was ultimately a “creative decision,” Glazer adds. “We had been talking about what we envisioned as the end since Season 3, maybe. We just always thought, like, five or six [seasons]. But… it just became clear that it was the right decision creatively: for the world, for the characters, and for us as artists. We didn’t want to write it in a way that felt incomplete.”

Abbi actually turned the big 3-0 in the Season 5 premiere, so are the characters changing at all as they leave their carefree twenties behind? “I think they’re the same girls, but they are older,” Glazer says. “They’ve grown more layers. I feel like a tree ring per season, personally, I’ve earned.” She notes that when the show first started, it was about young people who were “fresh-faced” and “excited to be in New York for the first time,” but now “these girls have been here for years and years.”