The following contains a major spoiler from the Season 14 finale of CBS’ Criminal Minds.

Criminal Minds wrapped its penultimate season on Wednesday night not with any lives in danger, but maybe a heart or two.

Prior to Rossi exchanging vows with bride Krystall, we learned that JJ had some words of love of her own to share — with longtime colleague Spencer Reid. Held hostage by an UnSub who had been compelling people to get into car crashes and then shoot dead the other driver, JJ was eventually challenged with a “Truth or Dare” of her own. Choosing the former, she was forced at gunpoint to confess to her coworker her “deepest, darkest secret,” something she has been loathe to ever say aloud.

“Spence…. I’ve always loved you,” JJ eventually shared. “I was just too scared to say it before. And things are really just too complicated to say it now…. I’m sorry. But you should know.”

Later, after they got free and in a private moment at Rossi’s wedding, JJ claimed to Reid that she only said what she did to throw the UnSub off balance. Reid responded by posing his own “Truth or Dare,” and when JJ again chose the former, he asked: “Did you mean it?” JJ’s expression said it all, before they got whisked away to wedding reception revelry.

TVLine spoke with showrunner Erica Messer about the romantic reveal that either fans scratching their heads… or swooning. 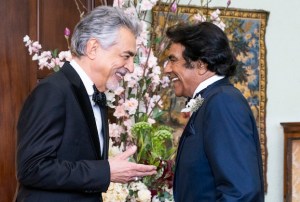 TVLINE | First off: Johnny Mathis, huh? How did that come to be?
Well, we had asked Joe [Mantegna] if there were any of his friends that he’d like to have come be his best man at the wedding, and as you know, Joe’s Rolodex is pretty amazing. A lot of his friends were going to be away because this was January that we were shooting it, but Johnny Mathis was around, and we said, “That’s perfect,” because last season we had where we introduced Gail O’Grady’s character, they played poker in his backyard and listened to Johnny Mathis. And of course, we licensed “Chances Are,” so could can play that at the wedding.

TVLINE | Now, about JJ’s confession. When the tease of a confession in the season finale, first circulated, that was nowhere on my radar. Where in your mind do you feel JJ’s feelings shifted?
What’s funny about all of this is the pitch came to me from the writer’s room, and I’m so “mother lion” about all of the characters, so my immediate reaction was, “That’s not going to work, they’re siblings. No, they’re siblings, they’re siblings.” And then the room kept pitching me, and I had written in [Episode] 300 about that time that Reid invited her to the Redskins game and other people were sort of trying to pair them up as a couple…. We had longer conversations about it, and I thought, well, you know these people have been in the trenches together — not literally, obviously, but as far as work goes, it’s life or death quite often, and who are we to say who gets close and who doesn’t get close? I’ve talked to plenty in law enforcement, and there’s a bond there that defies a traditional definition. And so, I just kind of fell more in love with the idea that, yeah, it’s messy and it’s weird, and “I’ve loved you for a long time,” like, that’s just the truth.

We’re going to dive into that in the first two hours [of Season 15] because we can’t leave everybody hanging and then pretend it didn’t happen. It’s definitely a huge driver for the first handful of episodes that will help add layers to those characters again.

TVLINE | At the time that you finally signed off on the idea, did you know that the final season was ahead? And did that perhaps give you a little nudge?
Exactly. We already knew we would have to keep chasing Michael Mosely [as “The Chameleon”], and that’s great for a final 10, but emotionally, what are we coming back for? This felt like a really interesting, surprising way to go. Like you said, it wasn’t anywhere on your radar, and I think most fans will feel that way. And the truth is, we had a long conversation with Matthew and with AJ and just said, “Here, this is what we’re thinking of doing. Do you have any objections to this?” And they were all for it.

TVLINE | That’s interesting because over the years I’ve always felt that Matthew is highly protective of Reid’s personal life.
Right, and he remains that way, but I think when we started talking about the fact that it’s hard to define the closeness of people like that, they understood because in a lot of ways, we’re living that [on-set]. We’re living the not life and death version of it, but we’ve all been together for so long that there’s a closeness that can’t really be defined.

To sort of get back to your initial question, I think that they were always close. You know, at the end of Season 1, she had such a fondness for him, and then she meets Will LaMontagne in Season 2….

TVLINE | There was actually a moment in a recent episode where a line or exchange actually hit me like, “Perhaps these characters are closer than I thought they were?”
Yeah, Episode 12. Bruce Zimmerman wrote it. JJ asks him if he’s ever pictured a different future. He gets into a scientific explanation, and then he says, “No, I have a few of them, actually.” When that was written, [JJ’s confession] was not greenlit, but when they were shooting that, I remember looking at Bruce like, “Wow, this kind of works.” I think one of them says, “I’ll tell you about it sometime, it’s a date,” and we kind of said, “That could work.” But the bigger thing for me was protecting them, and I don’t want JJ to seem unkind and hurt Reid’s feelings in any way, or for people to say… 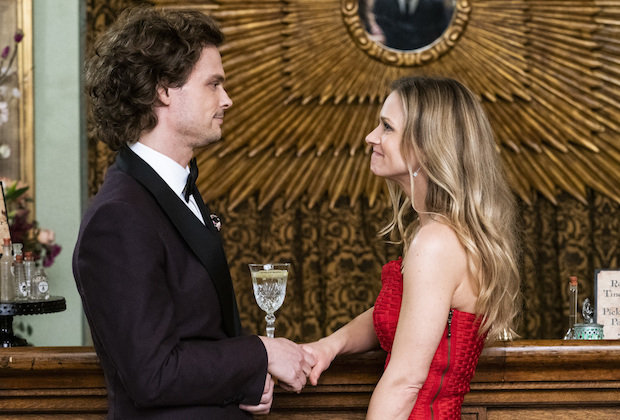 TVLINE | Well, the sticky wicket is not discounting the value of her marriage.
Right, that’s the thing. We deal with that in the first two hours of the final 10 because that needs some explanation and some tender care, really, to have her be fair to everyone.

TVLINE | I felt like Spence asking her his own “truth or dare” was basically him saying, “Me, too.”
Yeah. It’s so funny, taking a poll of people, half of them think she was lying [to the UnSub] because we set up in the very beginning when they’re playing poker and she says, “I’m a better liar than you think.” So, half of the people think she’s lying, and half of them think she was telling the truth, but 100 percent think he loves her too, so that’s where it’s hard. Everybody is like, “Oh, of course he loves JJ, that’s no secret….”

TVLINE | Get in line behind the rest of us!
Exactly.

What did you think of JJ’s confession? Weird, or wow?