This week on The Flash, while Barry was busy shopping the black market, Iris found herself alone and face to face with a furious Cicada!

With Cisco’s meta cure near completion, Caitlin shares with the team the “but” of the matter — to apply it so Cicada and remove his powers, the Big Bad will need to be detained for a full minute. No inject-and-run here! The solution to the problem lies in a MacGuffin piece of tech that Ralph’s buddy Earl Cox says can be found on a black market that is run by a guy named Goldface. After literally dropping into the secret marketplace and then BS-ing their way past the proprietor (who didn’t think he smelled any “scum” on Barry aka “The Chemist”), the two were tasked with helping steal another MacGuffin (a 3D organ printer) in order to get their hands on the first one.

Having already failed to get some cop-killing tech off the market, Barry had further ethical issues about robbing a hospital of the life-saving device. And Ralph knew it, so he locked Barry inside a van while he joined the other anonymous criminal colleagues for the heist. But when Ralph himself laid eyes on the printer and the paperwork that showed the kids who could be saved by it, he tried to thwart the robbery. Barry meanwhile freed himself from the van, but he and Ralph wound up facing off against Goldface, who they learned was actually made of gold, and thus was pretty resilient — until, that is, Barry tricked him into lassoing a gold chain around a circuit box, electrifying himself into a pool of molten ore. 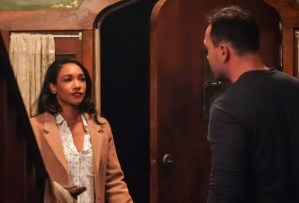 Iris meanwhile sought to give the fledgling Central City Citizen a buzzy-not-“boring” boost by doing some investigating of Cicada, procuring Orlin’s address from one of his coworkers. Iris sneaked into the dingey house and had just started snooping when Orlin came home. Iris evaded discovery, then pretended she had just arrived at the doorstep to interview “Robbie” about lead contamination in the water supply. This ruse passed muster until Iris went to leave and Orlin saw her grab the handbag she left behind earlier but hadn’t arrived with. A fight ensued, but just as Orlin summoned his dagger to slay Iris, she grabbed a knife (or pen?) and plunged it into the wounded, glowy part of his chest. Barry, Ralph and Caitlin arrived on the scene soon after, but Cicada had escaped. Seeing as how Barry and Ralph struck out at the black market, how will they ever get the cure to Cicada? Holding up the bloody pen (of knife?) she had stabbed him with, Iris said, “I know his weakness….” (Though I don’t quite understand what she meant by that; can a smarter someone illuminate me?)

Elsewhere in the episode: Eobard Thawne counseled Nora on how to throw Sherloque off her scent. Explaining how by wearing a person’s (Wells’) face you can know their mind (and making a reference to “Infinite Earths” along the way), he guided Nora to make minuscule changes to the malleable timeline in a way that wound up putting Sherloque in the path of Renee Adler, a pretty librarian. When Sherloque accidentally scared Renee off with his skills of perception, Nora tried to help him out by summoning four of his ex-wives, all of whom are other-Earth doppelgängers of Renee. Thing is, these ladies had no desire to help Sherloque but instead leaned on him for overdue alimony! One of them even taunted Sherloque about being destined to be forever alone. Feeling guilty about things, Nora arranged for Sherloque to get one more chance with Renee, where he apologized for his earlier behavior while also proving he is a perceptive detective. As Renee left after giving him her digits, Sherloque realized that she is a meta, and thus is at risk of harm by Cicada, so he poured himself back into that case, thus steering him away from Nora’s shady business.

What did you think of “Goldfaced”?