This week on The Good Doctor, Shaun and Glassman get high and take a ridiculously expensive Uber ride. Meanwhile, Andrews leads Melendez, Lim and the residents through a difficult transplant procedure.

Shaun takes a vacation day to look after Glassman, then performs a “practical, albeit anecdotal experiment” and takes one of his mentor’s CBD-laced nausea pills. Glassy gives “Smurph” the OK, then the buds play a round of indoor golf and break everything in sight — including the urn that housed Grandma Glassman’s ashes! They quickly tire, then space out on the living room floor, where Shaun fills Glassman in on Lea’s new boyfriend Jake.

Shortly thereafter, Glassman gets a serious hankering for some Mallomars. Shaun orders a car, and they embark on a citywide search spanning 32 (!) supermarkets with their ever-so-patient Uber driver (played by Absolutely Fabulous‘ Mo Gaffney). After they come up dry, the Uber driver suggests that they call off the search and pick up a pizza instead, but Glassman is adamant. He doesn’t want a pizza. He wants those Mallomars, dammit! 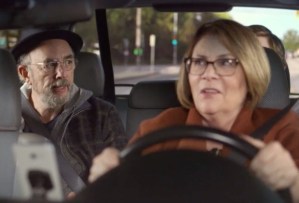 Next up, they travel to Glassman’s high school in Livermore, where they meet with longtime janitor Flake. Flake has been employed at the school for more than 40 years, and keeps tabs on former students (because that’s not weird at all). After a trip down memory lane, he tells Glassman that Robin has married a dentist and moved to Portland, Oregon.

Having already come this far, Glassman, Shaun and their nameless chauffeur hit the open road and arrive the following morning. Before they get out of the car, Glassman opens up about his biggest regret of all. He tells his driver that he wrote something petty in Robin’s yearbook that was borne out of anger; he thought his crush was unrequited, then read what Robin wrote in his yearbook: “I only have two regrets: my haircut in junior year, and that you never asked me out.”

Robin invites Glassman and his friends into her home and serves them — what else? — Mallomars. Glassman tells her that he came all this way to apologize, but stops short of reminding her what she wrote in his yearbook. After they leave, Robin pulls out her yearbook and reads what Glassman wrote. It’s unclear if she remembers what she wrote in his.

Back at home, Shaun asks Glassman if he wishes he’d never met Robin, knowing that he’d never be with her. “Not for one second,” Glassman answers. It’s then that Shaun admits aloud that he’s not OK that Lea is into Jake.

At St. Bonaventure, EMTs roll in with Karen, a 14-year-old girl who has suffered potentially fatal injuries in a car accident, including a pseudoaneurysm and an aortic dissection. In the OR, Melendez wants to prioritize Karen’s head trauma, but Lim disagrees. “Heart trumps head,” she declares, and Melendez doesn’t so much as hesitate before he says OK. The decision to repair the aorta ultimately costs Karen her life; midway through surgery, the patient is declared brain dead.

Afterwards, Andrews approaches Karen’s guilt-riddled mom Shannon in the hospital chapel. He tells her that there’s another young patient named Molly, whose face was horribly disfigured in an accident. (We eventually learn that the disfigurement was the result of a shotgun accident.) With Shannon’s permission, they can give Molly her daughter’s face. Shannon initially objects, but changes her mind after she gets a glimpse of Molly in the hospital elevator. Andrews then leads the entire surgical staff through the transplant, which is ultimately a success. 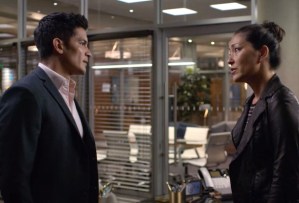 Later on, Shannon visits Molly in recovery. She brings her a photo album to introduce her to Karen, then asks to say her final goodbyes. She kisses the face that once belonged to her daughter, then leaves Molly’s room.

Losing Karen takes its toll on Lim, who points out to Melendez that he didn’t challenge her in the operating room. That’s when they realize that their personal relationship has affected their working relationship, and things will never go back to the way they were. But both of them are OK with that; they’d rather adjust to this new dynamic than throw in the towel on their secret romance.

What did you think of The Good Doctor Season 2, Episode 14? Hit the comments with your reactions!