As one relationship came to an end in Thursday’s midseason premiere of Will & Grace, two others were strengthened, and a fourth started up out of nowhere. Oh, and there was a bespectacled rabbit hogging the phone. “Say what?” you say. Pour yourself a chocolate milk and read on — I’ll explain. 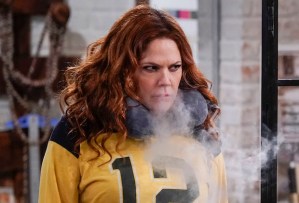 ‘I’M OFF TO DIVORCE ATTORNEY, WISH ME MONEY!’ | As “Family, Trip” began, Grace encouraged Karen to share her feelings about the end of her marriage before leaving the office for a meeting with her divorce lawyer. But “honey, feelings are for poor people and the liberals who love them,” the soon-to-be divorcée replied. As such, she didn’t have any. Well, “I’m here,” Grace assured her, “if you ever change your personality.” Before Karen had recovered from the shock of noticing her boss’ outfit (and struggling mightily to say that it was pretty), Grace got a surprise of her own: Turned out her sister Janet (Mary McCormack, who’s slaying on The Kids Are Alright) was crashing at the office. Frank’s cheating, she explained. And she’d love to tell him that it was over, “but his wife just got back from active duty,” so… awkward.

Meanwhile, Jack arrived at Will and Grace’s just as a bunch of the lawyer’s students was finishing up their study session. “Swell of you to visit the elderly in your spare time,” Jack told the youngsters, prompting Will to brag that they thought of him as the cool teacher. They’d even invited him to a warehouse party! Soon, talk turned to the wedding bands that Jack had just picked up. “First ring I’ll ever wear,” he said. “On my finger.” After Will noticed that Jack had had inscribed in Estefan’s ring the words “to my soulmate,” they started chugging the chocolate milk that the collegians had forgotten in the fridge. Shortly, Karen arrived to have Will look over her divorce papers. Like Grace had, Will and Jack asked how the nearly-former Mrs. Walker was coping. With what? she answered. A divorce decree is just a piece of paper, “like a restraining order or… the Constitution.” Before taking off to begin her second act, she swigged some of the chocolate milk, cracking, “It’s my one vice.” 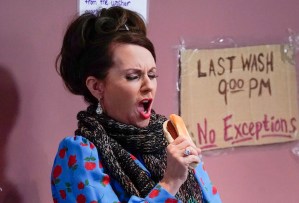 ‘JANET… IT’S A BEAUTIFUL NAME’ | Shortly, Grace was doing backflips, metaphorically speaking, to try to impress Donna (guest star Chelsea Handler), an impatient client who’d said that the designer’s last paint suggestions had been so bad, they’d given her “eye herpes.” When Grace left the room for a moment, we discovered that all it actually took to wow Donna was one look at Janet. Though Grace’s sister readily agreed to have a drink with Donna, she made it clear that she was straight. In fact, she made it clear over and over again until finally the lesbian had asked “Are you?” so many times that she answered, “You tell me.” Later, Grace was stunned to arrive at Donna’s… and find Janet there. “I’m a lesbian now,” Janet said. “Deal with it.” When Grace balked, Janet suggested that she just didn’t want to think of her sister having sex. “Well, who does,” Grace shot back, “except for Angelina Jolie’s brother?!?”

Back at Will and Grace’s, Will and Jack started seeing things, and realized that there must have been drugs in the chocolate milk that the students had meant to drink before their party. Out on the street, Karen was feeling the effects, too: After mistaking a laundromat for a theater advertising the final performance of Mrs. Stanley Walker, she sang a dazzling rendition of “The Man That Got Away.” At the same time, Will and Jack wondered whether the former was actually the latter’s soulmate. “Whoever this ring fits,” Jack decided, “is my soulmate.” And he managed to get Estefan’s wedding band far enough onto Will’s finger that he’d have called his fiancé to call off the wedding, had a rabbit wearing glasses not been on the phone.

‘I USED ALL THE BREAD TO RETILE THE BATHROOM’ | High as kites, Will and Jack went from soulmates to sparring partners quicker than we could get through a commercial break. Only when the effects of the drug began to wear off did they conclude that all of that talk of them being soulmates had just been a result of their chocolate-milking. Nonetheless, Will asked Jack to make a vow to him “in front of God and all the high-end male erotica in this apartment: Do you promise to be in my life forever?” Yes, Jack said. Of course he would be there through “all your weight fluctuations, every relationship you trick a man into being a part of… ” — the works.

Finally, Grace and Janet had it out. The former accused the latter of always making her life harder. In turn, the latter… aw. Janet admitted that she hated what a bad big sister she was, especially when she recalled that their mom had once upon a time called Grace Janet’s baby. Softening, Grace confessed that she’d failed, too — she hadn’t, as Bobbi’d wanted, been kinder to Janet. In the end, Janet suggested that they at last do what their mom had always wanted them to. “Neither one of us is gonna marry Josh Groban,” Grace said. But that wasn’t what Janet meant — she just meant that they should look out for another. So, what did you think of the “Family, Trip”? Were you relieved or disappointed that the show didn’t make Will and Jack soulmates? Grade the episode below, then hit the comments.