Star Trek: Discovery may be set in the distant future… but this week’s episode brought back a couple of ghosts from Michael Burnham’s recent past. 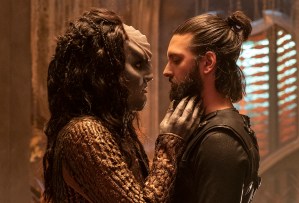 Thursday’s installment checked in with former Starfleet lieutenant Ash Tyler, who romanced Burnham last season — before we learned he was actually the Klingon Voq inhabiting a human body. Tyler is now serving as Klingon leader L’Rell’s right-hand man, and he reached out to Burnham via hologram to warn her about a possible coup attempt that could threaten the uneasy peace between Starfleet and the Klingons. So Burnham and Tyler are still in touch… but star Sonequa Martin-Green warns that Burnham is not ready to open her heart to him just yet.

“That is the question: Are you the same?” she tells TVLine. “Can I trust that you’ve made those leaps in your identity for me to just hand you my heart that I am very, very protective of, because I have suffered so much trauma and loss myself?” Burnham’s hesitation around Tyler is “just a matter of not knowing where he is in his development,” she adds. “Is he truly ready? Can he even handle it?” But she admits that there are still feelings there, too. “Obviously, they’re in love with each other. It does not just go away. So they’re always going to have to contend with that, in some way.” 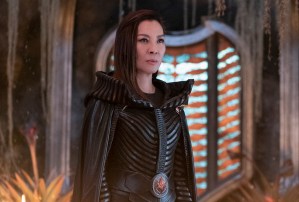 Tyler wasn’t the only familiar face to pop up this week, either. Just as L’Rell and Tyler faced certain death, Emperor Georgiou materialized to save them, as a member of Starfleet’s secret-ops division Section 31. Burnham doesn’t have a lot of love for her mentor’s mirror-universe doppelganger, Martin-Green says. “It’s very unfortunate that she’s back, and back in this capacity. ‘Now you want to join forces with us? Why are you back?'” But we will see more of Burnham forging a relationship with this new Georgiou, she teases: “There’s so much exploration going on in Season 2: not just science and wonder, but of each other. We have time for that. These relationships are really going to get dug out. Every one of them is deepened.”

Trek fans: How are you liking Season 2 of Discovery so far? Drop your thoughts in a comment below.