We’re gonna need some tissues, stat! Thursday’s feels-filled Grey’s Anatomy not only included the risky surgery that was going to decide whether Catherine lived or died, it also reunited Meredith with her terminally-ill father (Shondaland fave Jeff Perry). Have you dried your eyes enough yet to read through a recap? I’ll give you a minute while I look over it again to see how many typos I made while I was choking on that lump in my throat. 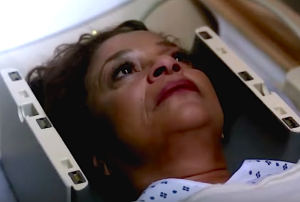 ‘I NEED YOU TO BE MY HUSBAND AND MY SON TODAY’ | As “The Winner Takes It All” began, Catherine quietly sang “Ain’t No Mountain High Enough” as she underwent a pre-op MRI, Richard attended an AA meeting, and Teddy found Koracick practicing for surgery with a game of Operation. “Funny bone,” he cracked. “Not as easy as it looks.” (And I am 100 percent on board with Teddy and Tom — already. Am I too easy?) Richard turned down Mer’s offer of coffee and assured her that he didn’t need her support. You know who did, though? Her father, he said, all but pushing her out the door to visit Thatcher. Shortly, Jackson rubbed Koracick the wrong way by questioning the plan that he and Amelia had laid out for Catherine’s surgery. It was gonna be a long day for the lot of ’em.

Next thing we knew, Meredith was at Thatcher’s door. After steeling herself to ring the bell, she was greeted by her father’s aide, who recognized her at once. “Do you want to come in?” he asked. “That’s a loaded question,” she replied. Once she’d been ushered into the study, she came face to face with her father for the first time in years. Before leaving them alone, Thatcher’s caretaker reported that the patient was totally clean and sober. Still, “I didn’t come here to say anything or to hear you say anything to me,” Mer told her dad. But he was in a talkative mood — time was short, after all — and eager to discuss his wondrous journey to Zimbabwe following Lexie’s passing. “You went and got a whole new life — halfway around the world this time,” she said. And he’d forgotten all about her. OK, so maybe, just maybe she had a few things that she wanted to say to him, too. 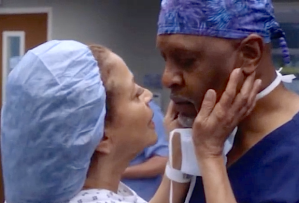 ‘I WILL SEE YOU WHEN I WAKE UP’ | During a moment alone with Jackson in the O.R., Catherine recalled her nervousness the first time that she’d had a scalpel put in her hand — and the way “Ain’t No Mountain High Enough” had calmed her down and restored her joy. They shared a laugh about how he’d called Diana Ross “old-people music,” and she revealed that of course she’d snuck into the gallery to watch his first surgery years ago. Then the conversation got deadly serious: Catherine revealed to her son the arrangements that she’d made, should the worst happen — and the party that she’d planned for if she made it off the table alive! Meanwhile, Koracick and Amelia couldn’t shake their uncharacteristic nerves. Tom was so off his game, he was even willing to indulge in the “word vomit” that Amelia favored. In the end, he admitted that he couldn’t lose Catherine — he’d lost enough. “So let’s not lose her!” Time for the superhero pose.

“‘For better or worse’ doesn’t include seeing [your wife’s] insides,” Catherine told Richard, encouraging him not to spend the day watching and worrying in the gallery. Besides, “I will see you when I wake up.” Just then, Jackson cued up “Ain’t No Mountain High Enough,” and my eyes welled up for the first time as the entire O.R. happily danced around. (How freaking radiant was Debbie Allen?!?) As Koracick and Amelia dug in, they kept the music going in the background to keep their spirits up. Meanwhile, Maggie joined Richard and Jackson in the gallery. At this point, things were “so far, so good,” Jackson reported. Except that he hated Koracick. “He’s bopping over my mother’s spine!” he marveled. As for Richard, he wasn’t leaving — he and Catherine had an agreement to always be where the other needed them, and he was right where he should be. As Maggie went into the hall to check on Jackson, things went downhill suddenly in the O.R. — Amelia and Koracick were going to have to turn Catherine over sorta and attack the tumor from another angle, putting the patient at risk for the loss of the use of a hand, for starters. 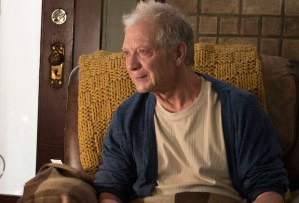 ‘ALL I REALLY WANT TO SAY IS THANK YOU’ | Back at Thatcher’s, Mer reminded her father that when she gave him a piece of her liver, he’d said they would try to keep in touch, to be closer. But he hadn’t, she spat. On the contrary, he had — he’d even come to Derek’s funeral, he revealed. He just hadn’t spoken to her. She’d appeared as ghostly to him then as he now did to her. And if he’d made sure she knew he was there, it would have been for him, not her, he added, growing short of breath. However, he came home for her. “I tried calling you,” he went on. But she hadn’t called back. So he and Richard began talking, about a lot of things. In the end, he’d realized that all he really wanted to tell his daughter was thank you. “When you gave me your liver, you gave me time,” he said, to get his act together and finally have a real life. “I just wish you and I could have shared it.” Well, “I guess you did try this time,” Mer had to concede. “I just didn’t know.” As talk turned back to Lexie, Mer revealed that she had another sister. And Maggie, she said, was “the best of Ellis and Richard.” In that moment, I thought Thatcher had actually passed away from shock. But eventually he spoke. “At least something good came from all that,” he said.

Later, Mer and Thatcher actually shared a smile as he recalled that Ellis hadn’t even wanted to admit that she was pregnant with her till she was ready to deliver. “I never heard her laugh like that” before, he said, remembering that he’d thought, “What a way for you to come into the world.” In that moment, Mer’s mom had been so delightful, he would have married her all over again. As Thatcher began to deteriorate before Mer’s eyes, she told him about his grandkids. “They are exhausting and amazing,” she said. “I wish you knew them, too, because they are so, so beautiful.” And just like that, Mer’s father died. (Cue that lump in my throat.) As the hour drew to a close, Grey was back at home and giving her kids the presents that Thatcher had told her he had for them. 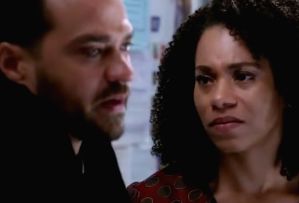 ‘I CAN’T IMAGINE WHAT A ROOM WOULD EVEN FEEL LIKE WITHOUT HER IN IT’ | Finding Jackson misty-eyed, Maggie sweetly listened as he described his larger-than-life mom to her… and reflected on losing Samuel. It makes you feel unsafe, Maggie suggested, like nothing makes sense anymore. “I don’t like it,” he sobbed. “I don’t like it.” (I’m not crying, you‘re… OK, fine, I’m crying.) Meanwhile, Catherine was turned on her side in surgery, and secured so that the operation could continue. “They did it,” Bailey told Richard, who hadn’t been able to bear to watch. (Jeez, the look on Richard’s face as Koracick and Amelia went back in — heart-shredding.) For a second, Koracick froze… till Amelia gave him a task that snapped him out of it. Then, yikes! They discovered that their best course of action was to take out the tumor piece by piece. Leaping into action, Richard got on the intercom and told the docs to use his MasSpec Pen to make sure that they’d gotten it all. His invention wasn’t approved yet, but it worked, he swore.

When Catherine came out from under anesthesia, she was thrilled to learn that her hands and feet moved. “I thought for sure you were gonna kill me,” she told Tom. He and Amelia hadn’t, but they still had some difficult news to break: They’d had to leave a cancerous nodule behind. Still, “I can live with this for many years,” Catherine said. This wasn’t a death sentence. “You two have given me my life back!” And in a couple of months, the lot of ’em were gonna have that party she had planned. At day’s end, Koracick ran into Teddy, who joked that she’d been on the fence about him being able to pull off the surgery. “Why don’t you get cleaned up… I’ll buy you a drink,” she offered. Instead, he wanted to wait for her to spend money on him when he smelled better — and paid a visit to the chapel to tell his son that he’d saved his friend. (Lump No. 2.) Meanwhile, at a meeting — which Richard also attended — Amelia described her “terrifying” day operating on a legend who meant the world to a lotta people that she loves. And she was so grateful to have been sober to feel every incredible moment.

So, what did you think of “The Winner Takes It All”? Were you relieved that Catherine survived? Sorry to see Thatcher go? The comments section is now open for business.