Mind you, it’s not goodbye forever. The actress will be returning as “the Paris of people” for another episode later this season, and the door is open for her to make additional guest appearances. For now, though, her alter ego has left everyone at the precinct with a “signature Gina moment” to tide them over — a game of chess with her boss, a ladies’ brunch with Rosa and Amy, and the infiltration of an elite club with Jake, during which she tricked Mario Lopez into attending her going-away party… then refused to let him in upon his arrival!

During a recent conversation with TVLine, Peretti admitted that walking away from the Nine-Nine gang “wasn’t fully just my decision. It’s hard to get into the weeds of what exactly transpired and how it all shook out, but it kind of came together to be this timing that presented itself. So I kind of knew that it was going to be happening for a while… [and was] holding on to this feeling of, like, ‘I’m going away from this family’ in my head.”

Be that as it may, there’s no bad blood. “If you talk to anyone in acting — we didn’t even know if the show was going to be renewed or not — you’re always thinking [about] what’s going to happen in your life. It’s the endless twists and turns of show business, and this is kind of how it wound up evolving,” Peretti said. “But I’m going to do another episode, and there’s nothing but family feel, so… “

So… let’s hear what she has to say about Gina’s sendoff.

TVLINE | Were you pleased with how the farewell episode turned out?
I was definitely daunted by playing chess. [Laughs] Chess for me is like math class, and it’s something that I avoid at all costs, so when I saw the chess game in the script, I said to [executive producer] Dan Goor, “Are you sure? I don’t know how to play chess,” and he said, “It’s fine! It’s fine! Just move your hands around.” Then, of course, Andre [Braugher] was like, “Well, I want to know all the proper moves. I don’t just want to do fake hand moves,” and I was like, “Please, just do fake hand moves!”… I actually had to take a moment to go cry in the storage closet while we were shooting it, because trying to get all the hand movements and lines and stuff [was overwhelming]… But obviously, I love the dynamic of Holt and Gina.

Then there was the Jake story. We had talked about having a high-stakes comedy story for Gina, because that’s something that she doesn’t always get to do. Being that she’s a civilian, there’s not a justifiable reason for her to be in these high-stakes scenarios that Jake and Charles and the others get to be in. And then getting to have a Gina/Amy/Rosa story, which was always a friendship that I wanted to explore… There was definitely a lot there to sink my teeth into.

TVLINE | How collaborative, if it all, was the process of coming up with Gina’s exit?
In terms of the ending, Dan definitely was like, “What are the dream things you’d want to do?” But somehow an 80-page chess game wound up in the script. [Laughs] So he definitely asked me, but that doesn’t necessarily mean that’s what I said. I was pitching a spa day that me and Holt have in his office and nobody knows about it… We shut the blinds and just candidly talk about people and read magazines. Anyhow, that went into Dan’s head and turned into a serious chess game… But yeah, we cracked up a lot about all the different stuff that could happen, and he’s been very fun to kind of hash out ideas out with.

TVLINE | Was the Mario Lopez cameo your idea?
[Laughs] No… I actually opened the script and said, “Wait, does this mean Mario Lopez is going to be in this episode?” And it did. Sometimes you see a name [in the script] and they say, “This is a placeholder, and we’ll figure out who’s available,” but no, it was Mario Lopez. That was a very funny idea. 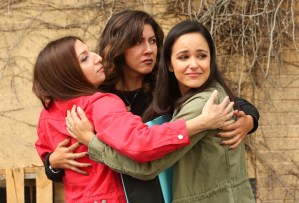 TVLINE | Gina’s farewell is broken up into four “movements.” Which of them dredged up the most emotion for you?
Well, I did have to take the aforementioned weeping-in-a-broom-closet break. It depends on the kind of emotion you’re talking about. In terms of actor panic? Then that would be the chess story. In terms of sentimentality, it’s hard to say, but I definitely liked — and I think fans also liked — that Jake and Gina were childhood friends, and me and Andy [Samberg] were, too. I always wanted to see that friendship, so it was cool to get a chance to go a little more into that, in both this week’s episode and the last one.

TVLINE | Looking back, do you have a favorite episode?
You know, it’s so hard to think of it externally, because when I think about my favorite episodes, it’s more about the process of shooting. I know a lot of us feel like [Season 2’s] “Beach House” was one of the most bonding episodes. A lot of us got hotel rooms and just stayed out there because we didn’t want to drive all the way out in the morning, so we just hung out. That and the Thanksgiving episodes, which are always kind of hellish [to shoot], because everyone is in every scene and it takes forever. But much like actual holidays with your family, you still in hindsight think of them fondly. In terms of objectively viewing, I definitely liked last week’s [high school reunion] episode. I also loved the Kwazy Cupcakes one.

TVLINE | So many of the best Gina episodes are also the best Holt episodes, wouldn’t you say?
I love all the Holt ones because it’s an interesting pairing. These two have this unlikely respect for each other, and it was always redeeming of Gina, I thought, that Holt had a great deal of faith in her. And, of course, Andre’s just a funny, strange guy, and his choices are so surprising, which is to me what makes someone funny.

TVLINE | You’ve probably shared the most screen time with Andre over the years. Was it important to you to have that final scene between Gina and Capt. Holt, where he expresses genuine concern for what she’ll do after she leaves the precinct?
Yes, Capt. Holt being kind of her father figure and someone that I think she truly respects, it was important to Gina to have his well wishes and his support. And it’s certainly not easy on her to make that choice to walk away.

TVLINE | The episode ends without revealing what Gina has planned for her future. Is that being saved for your return episode later this season?
We’ll shine a light on that. We most definitely will. 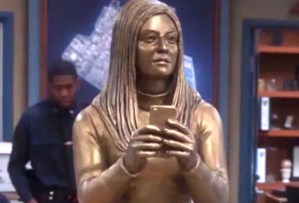 TVLINE | Last but not least, what did you really think of the Gina statue?
Are you kidding me? I had to do ADR specifically for the part where Gina says that the statue looks nothing like her, and that was something I added the day of because this statue is ridiculous. [Laughs] I had to go in and do, like, a 360-degree, extremely serious photo shoot for this photo-realistic statue, and then I get there and I’m like, “Who’s that? That’s Gina?!?” So I’m like scribbling on my sides, “Her hair looks like it’s wet and just has conditioner combed through it… her jeans look cheap… ” So they let me do a take where I [said all of that], but I didn’t know if it’d get in or not. It’s just so funny because… I thought I was going to walk in and be like, “Is that a mirror?” But no, it was literally unrecognizable.

What did you think of Peretti’s — and Gina’s — exit? Grade the episode in the poll below, then hit the comments.