The Orville has a sassy new security chief, in the former of Jessica Szohr.

Szohr made her debut last week as Lieutenant Talla Keyali, who stepped in to fill the void left by fellow Xelayan Alara Kitan (played by Halston Sage). Already, Talla was among the crew who first contact with a civilization that brutally segregated people based on their birth sign. With Episode 6 of the space dramedy’s second season landing this Thursday at 9/8c on Fox, Szohr — whose previous TV credits include Shameless, Complications and of course Gossip Girl — talks about transforming for the role, a “little flirtation” to come, and reuniting with former costar Leighton Meester (XOXO).

TVLINE | So this is a different look for you.
It’s a very different look for me, for sure. Yeah, when we were coming up with her look and figuring out the hairstyles and things, it’s was so weird. Like, because from under my eyebrow all the way up to my forehead, that’s all fake, and then the stuff on my nose and my ears…? I’d go into my trailer and look up and be like, “Oh my God,” because I forget that I have all this stuff on my face. It’s also funny because my mom will FaceTime me when I have a break on-set and when I answer it’s a bit shocking at first. But I like her whole look.

TVLINE | When did this all come together, this opportunity?
I sat down with [series creator/star] Seth [MacFarlane] maybe around January [of 2018], and he told me what he wanted to do with Talla…. The social issues that he touches on with this show are so amazing and genius, and it’s so fun because we get to play with it, in space. We’re using all this space jargon but when you watch the episode you see that we’re really trying to make a point. I love that part of the show, that had a lot to do with me wanting to do it.

TVLINE | Yeah, as the last episode was unfolding, I was like, “Where are they going with this, with the C-sections and everything…?” And then when it became about astrology, I found that very interesting.
It’s so crazy, right? When we were at the table read, I thought the same thing.  “Where in the heck is this episode going”? But yeah, I really enjoyed it.

TVLINE | Talla is sassy.
She is. She’s got a little spice to her. She is funny. She definitely goes after what she wants, she’s very direct.

TVLINE | She’s also a little punch-happy.
[Laughs] For sure, but she does really have a big heart and always wants to do the right thing.

TVLINE | What else have you been told about Talla? Any backstory?
Well, she’s Xelayan, so she is super-strong, which I think is funny because she’s tiny and then all of a sudden….

TVLINE | Well, look at Halston [Sage], who was, what, 98 pounds soaking wet?
Exactly, so it’s just so funny when I’m reading a script and it says, “Talla is going to move this door” or move this building. I’m like, whoa.

TVLINE | What’s an actual display of strength that you have coming up?
There’s a lot of stuff in the next couple episodes.… They are very adamant about me not giving away anything, but yeah, I have stunts pretty much in each episode. 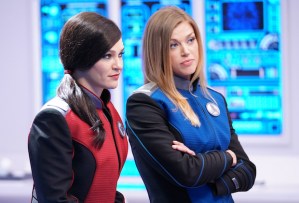 TVLINE | Talla has a respectful relationship with Ed and Kelly. What dynamic does she share with any of the other crew members?
I mean, she’s close with Bortus, just because they sit close to each other on the bridge, but she has a really good dynamic with everyone. But yeah, I can’t really say anything more, because it’s going to give something away.

TVLINE | Halston’s character was just about to dive into the ship’s dating pool when she got written out. Are you going to strike a spark with anybody? Does Talla have any established romantic history?
There’s no romantic history, but there is a little flirtation that comes maybe this week or the following, and it’s the whole underlining issue in the episode. It was like reading the script for my first episode — “Where is he going with this?,” and then I’m like, “Oh, OK.” It’s really good. I had to take some dance lessons for that episode.

TVLINE | Have you ever required any kind of prosthetics for a role before?
No, I don’t think so. And never a wig. I mean, when I did Piranha [3D] there was some stuff with the bites and things….

TVLINE | Oh Lord, I forgot about Piranha.
[Laughs] Yeah, but that was one thing when Seth and I talked, he was like, “Are you cool with sitting in hair and makeup for two-and-a-half hours in the morning?” And I’m like, well yeah, that’s part of the whole thing. I’m usually the first one in hair and makeup because of the prosthetics.

TVLINE | Oh, I have to imagine Peter Macon (who plays Bortus) gets in there a few minutes before you.
Actually, yeah, he’s usually right around that time, because his is a process too. You know what’s funny, which I didn’t know because I hadn’t seen that season, was he worked on Shameless as well. He was before me, in Season 5 or 6, playing a cop. 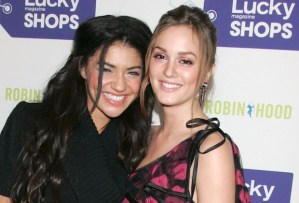 TVLINE | Isn’t fellow Gossip Girl alum Leighton Meester supposed to be on The Orville this season?
Yeah, she comes on later in the season, so we got to have a little reunion. That was really exciting and fun.

TVLINE | Just a backstage reunion also or on-camera?
A little bit of both. We don’t see each other very much because of our schedules, but we’ve always stayed in touch. I love that girl so much, and I was super pumped when Seth told me she was coming. That episode actually is one of my favorites of the season.

Want more scoop on The Orville, or for any other show? Email InsideLine@tvline.com and your question may be answered via Matt’s Inside Line.