This week on The Flash, Nora and her parents took an illuminating walk down memory lane… Iris debated embracing her journalistic fate… and Cicada’s niece was full of surprises.

Having decided that their next approach to stopping the unstoppable Cicada is to appeal to his heart, by waking up his niece, Team Flash got a ten-cent tour of Sherloque’s new gizmo, which allows them to enter Grace’s mind and hopefully lure her out of her coma. Sherloque warned that the process is not without risks, and as such two people should go in together. After also noting that said pair might get glimpses into one another’s memories, he promptly volunteered the speedsters for the mission — a notion that gave Nora great pause, seeing as she’s obviously worried that Dad would learn about her Thawne alliance.

Hoping to head that hitch off at the pass, Nora secretly hooked herself up to Sherloque’s tech and went in solo, finding Grace on “the other side” at the CCPD, after her parents died. But nearly as soon as Nora arrived, the portal vanished. Grace led Nora around, searching for the portal, eventually landing in an idyllic version of her uncle’s kitchen, complete with mile-high stacks of pancakes.

Back at S.T.A.R. Labs, Barry and Iris learned that Nora traveled into Grace’s mind by herself and got stuck there, so Sherloque hooked them up to give chase — except the marrieds landed not in Grace’s memories but their own daughter’s. Arriving on the other side, they found a “runaway” Nora on a bench inside the CCPD, but she scampered away. Following her to the Flash Museum (aka S.T.A.R. Labs), Barry geeked out over the sweeeeeet merch on display, while Iris noticed that young Nora was sitting on the floor. After sharing their horror over a display that said the seemingly immortal Cicada’s body count is up to 152 (…and rising) as of 2024 — killing more than Zoom or the Red Death — Iris’ heart sank when she saw her future self tack down and chide Nora for running away, to which the little girl huffed and professed her hate for her mom, her Flash action figure falling to the floor and breaking.

Nora meanwhile was transported to Grace’s hospital room, where she realized that the little girl has been listening this whole time while comatose. Putting two and two together, Grace deduced that her new friend is Flash’s daughter and thus a meta, and as we all know, Uncle Orlin haaaaaates metas. Declaring Nora a no-good liar/identifying her as a “pathogen” in her system, Grace released Cicada as a defense mechanism. Barry and Iris in turn dealt with Nora’s, which came in the former of Reverse-Flash’s animated museum costume. 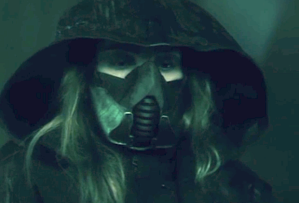 Thanks to a schmiencey phone call from Caitlin and Sherloque, Barry/Iris and Nora leaned that to reopen a portal back, they needed to find the location of a false memory. For Nora, that was the idyllic kitchen, where she fought with and momentarily KO’d Cicada (with the long blonde hair?); for Barry/Iris, it was the mother/daughter scene witnessed earlier, which when not colored by Nora’s negativity and anger was actually a sweet exchange (with an intact Flash doll).

Reverse-Flash taunted Barry with “death, failure, another broken family,” but Iris zapped the baddie good, using The Thinker’s chair: “Nobody breaks up my family, you sonuvabitch!” They leaped into Grace’s memory, where they saved Nora from Lady Cicada, and then all returned home, never to return again (due to problematic dark matter traces in Grace’s brain).

In the aftermath, Sherloque goaded Nora in front of everyone by suggesting she was protecting a secret… that being her painful feelings about her mother. (Uh-huh.) Sherloque then asked Barry how Nora’s defense mechanism manifested itself, not at all surprised to hear the answer.

Later, Barry and Nora surprised Iris at the future home of the Central City Citizen (to be run out of the recently vacated space across from Ralph’s P.I. office). Iris had expressed reservations about embracing her fate by going with that name for the paper, but as Nora noted, she was already “changing” the future — or at least the paper’s “established” year. Nora then confided in Iris that she was “angry all the time” in the future, and probably always would have a bone to pick with her mom. But she now realizes that Iris wasn’t stopping her from being her, but from being her Dad. “You were protecting me — I get that now,” Nora said, apologizing for her behavior both in the future and recent past. Iris in turn praised her little girl as an “amazing woman,” adding: “I will always love you — past, present and future.”

Speaking of the future… it appears that the Lady Cicada we glimpsed (and presumably the Cicada of 2024) is grown-up Grace. For as the episode drew to a close, the tyke groused to Cicada in her mind, “Nora lied to me… She will pay. They’ll all pay!”

* Cisco was tricked into a night out on the town with Ralph, but he wasn’t having any of it at first, fixated as he was on finalizing the meta human cure. But after sending Ralph away and then chatting up a pretty bartender/photographer named Kamilla, Cisco realized the final piece of the puzzle: comparing DNA from meta/non-meta siblings! And once the cure is done? Barry plans to use it on Cicada.

* In the second of two new messages we saw Nora send to Thawne via Gideon, she said, “My parents can’t know that you’re helping me stop Cicada,” and that she will “do anything to protect them,” including lie, lie, lie.

What did you think of the episode “Memorabilia”?