With Arrow‘s resurrection of a “suicidal” squad of baddies, original cast member David Ramsey found himself behind the camera for the very first time.

In “Past Sins” (airing Monday at 8/7c, The CW), Curtis like Lyla is upset to discover that Diggle has restarted The Ghost Initiative, comprised of Ricardo Diaz, China White (Kelly Hu), Kane Wolfman aka Joe Wilson (Liam Hall) and Cupid/Carrie Cutter (Amy Gumenick). Elsewhere, the past comes back to haunt both Oliver and Laurel, in distinct ways.

Ramsey shared with TVLine a preview of his directorial debut and the storyline twists that come with it. Plus, for how much longer will OTA be MIA?

TVLINE | What was the biggest challenge that this script presented you, as a director?
I think the biggest perceived challenge going in was earning the respect of my coworkers. But, that ended up not being a challenge at all. I thought it would be, but it really wasn’t.

TVLINE | Oh, they all love you, man.
Yeah, and they kept it dialed in. In terms of the script, because this is a continuing arc that Oliver has through the season, the big question was: At what place does this land within that arc? How much do we want to show, how much do we want to reveal, and how much of our hand do we want to play in terms of how this emotional beat connects to the third episode from now?

TVLINE | I brought that up with [showrunner] Beth Schwartz earlier this month: When does this Diggle/Lyla/Diaz thing make better sense as part of the bigger picture?
That’s right. And that’s always the challenge, particularly in episodic [TV]. It varies when you’re dealing with a show that goes for 13 episodes versus one like our own that goes for 22, but that is the big question in prep, when you’re working with your producers and your writers. How much do we want to tell? It translates when you get on set and you’re having a conversation with Stephen [Amell] and you’re saying, “Maybe you want to pull back a bit here, maybe you want to change this line a bit…” And Stephen, by the way, there’s no one better at it. 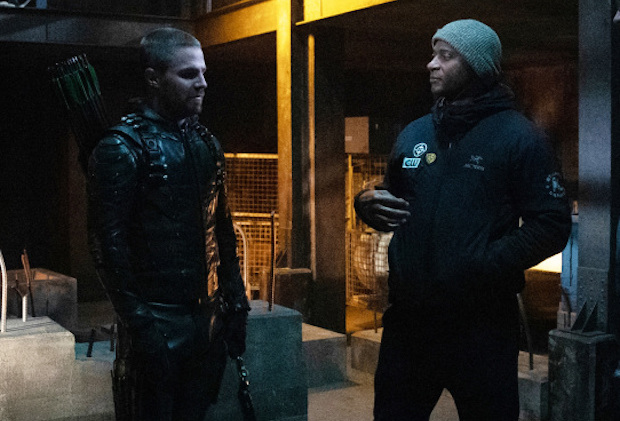 I was thinking about this earlier. I’ve been working on this show for seven seasons, and it’s obviously a very successful show. But when I step back as a director and really worked the beats, really worked the story, really worked where this [episode] fits within the overall arc of the season, you then realize what an actor like Stephen, or an actor like Grant [Gustin on The Flash], or an actor like Melissa [Benoist on Supergirl] are really doing. They’re playing the long game, but only giving you pieces within each episode of an overall arc. Stephen in particular knows what’s going to happen at the end of the season….

TVLINE | Oh, I’ve said that to everybody, even to [CW president Mark] Pedowitz. Stephen can quote chapter and verse. “In the third actor of Season 2, Episode 5, Oliver did this, so….”
And what I’m telling you is that is unique in lead actors. Not all lead actors do that. [Chuckles] Not all lead actors have that. This is turning into a Praise Stephen Amell-fest, but there’s a reason why this is a hit show for seven seasons. He’s not telling you what’s going to happen, though he knows.

TVLINE | And that only helps you as a director.
It only helps me as a director. Some actors don’t want to know because they can’t do that. But Stephen’s not one of those. He knows how to play now a moment now detached from what he knows happens three episodes from now. It’s a very rare talent in that respect. And as a director, now when I’m giving him a note…. First of all, we talk before the camera starts rolling about what the scene is about, so the notes between the scenes now are more like, “Can you start the line earlier?” Or, “Let’s take a bit of heat off that line, because her line now won’t make sense.” 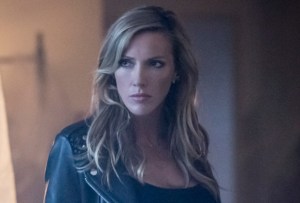 TVLINE | On the flip-side of these more nuanced and quieter scenes, how big do the scenes get in your episode? Any splashy pyrotechnics?
This can’t be compared to any of the big, huge crossover shows, and I would say that even compared to other “regular” episodes of Arrow, it’s someplace in the middle. There were no car explosions or flips, but we do have a lot of action with the new Ghost Initiative aka Suicide Squad. And Arrow obviously has a good amount of action, as well. But I would say that this is really a character-driven episode, for Oliver and Laurel. Katie [Cassidy] does a fantastic job. She and Stephen really carry the episode.

TVLINE | I heard we are going to get some Earth-Two backstory on her character.
You are. You are. And you get some looks at Arrow‘s version of Earth-Two. We’ve already seen it on Flash, so you’ll see Arrow‘s version.

TVLINE | Is Diggle going to get a chance to weigh in on Oliver’s fancy new SCPD gig?
Oh, he’ll be doing more than just weighing in. [Laughs] The whole police connection to Team Arrow is going to take a very interesting twist. So in answer to your question, yes, but there’s even more to that than you would think. 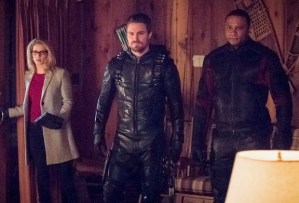 TVLINE | Lastly, are there any OTA moments to look forward to?
There are. You’ll see OTA again. It’s the crux of our show, right, but listen, there are 22 episodes, so we have to go away, we have to come back…. But yes, the return of OTA is absolutely happening, and it’s going to be fantastic. It won’t happen in my episode, but we will get back together.

TVLINE | I just want you out of those highly unflattering ARGUS coveralls, man.
Oh my god…. You do? I’ve been begging for it! It will happen.