Kara and Red Daughter’s worlds finally collided on Sunday’s Supergirl, though not at all how we anticipated. When a routine training session went south for the Girl of Steel’s doppelgänger, the military attempted to shock her back to life, inadvertently dispersing some transformative gamma rays throughout the planet. Traces of that energy infected a drug dealer’s pill supply, resulting in an enormous pair of angry, mutated frat boys.

The DEO was able to handle those two fairly easily, but it had a real problem on its hands when the Children of Liberty caught wind of the strength-enhancing street drugs. The gold-masked thugs stole the pills to attack the “roaches” at an otherwise peaceful harvest festival in Nia’s hometown of Parthas. Coincidentally, Kara and Nia happened to be in town for that festival, which pivoted to a memorial service after the sudden death of Nia’s mother.

Nia’s older sister Maeve blamed herself for not foreseeing and preventing their mother’s death. She’s been studying dream interpretation for most of her life, certain that she would someday inherit her family’s matrilineal dreaming ability — all the while unaware that Nia has been experiencing visions for months, including one that strongly hinted at their mother’s demise. 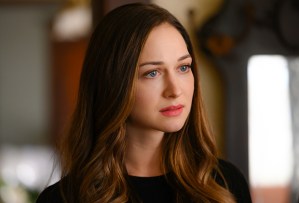 Maeve was finally clued in when Nia knew to save her from an axe-wielding Child of Liberty, but rather than thanking her sister for saving her life, she threw a transphobic hissy fit. “How did someone like you get them? You’re not even a real woman!” (I honestly can’t remember the last time I’ve been so gutted by six words spoken on a television show. I don’t side with Maeve on this one, but actress Hannah James really knocked it out of the park.)

Sensing Nia’s pain, Kara decided to let her in on a little secret: She’s Supergirl! (I know, right?) “You are not alone,” she told Nia. “You have a family. You have me.” It was a beautiful moment, especially since Nia came out as transgender to Kara during their road trip to Parthas earlier in the episode. It all felt very full-circle.

But just when things were starting to look up for our favorites in National City, the episode cut back to Kaznia, where it was revealed that Red Daughter’s status hadn’t improved over the course of the hour. “We have a problem,” one officer told another. “There is someone I need to reach in America.”

So, who’s that special “someone” overseas? My money’s on Lena, who’s been making major strides in her genetic testing as of late. She even has James helping her keep the lights on, despite concern from within the company. Perhaps this is also the way Supergirl intends to weave Lex Luthor (played by Jon Cryer) into the narrative. Lex was always up to… things.

* No question, this episode was easily the best of the season. We’ve been fed scraps of both Nia and Red Daughter’s storylines over the past 10 episodes, so finally getting some meat to chew on was most appreciated.

* I knew that Alex forgetting Supergirl’s secret identity would change her sisterly dynamic with Kara, but I never expected Alex and Supergirl to become enemies. I did not like that confrontation with Alex — sorry, Director Danvers. Not one bit.

* I did, however, enjoy Brainy’s attempt to blend in with the frat bros, as well as his inability to comprehend the card game Exploding Kittens. (“I don’t understand this game. These are not kittens, nor do they explode.”)

Your thoughts on this week’s powerful episode? Drop ’em in a comment below.