Are the S.H.I.E.L.D. agents still in mourning? Can Lucifer handle a devil of a clergyman? Why is #OneChicago’s next crossover harrowing? Who is Arrow about to introduce? Read on for answers to those questions plus teases from other shows.

I saw you visited the Agents of S.H.I.E.L.D. set. Any news on the Season 6 premiere date? Also, anything about Coulson’s return? –Jen
ABC has said nothing beyond “summer” yet for the premiere date. As for the other thing, no one I spoke to on set – where they were filming Season 6’s penultimate episode – spoke of Phil in the present tense. Take Chloe Bennet when I asked about Daisy’s state of mind when the season picks up, [REDACTED] amount of time after her mentor and father figure got dropped off in Tahiti to live out his final days. “In my mind, she has a bit more of a peace to her,” she said. “There is obviously the mourning of Coulson, but she’s also been through it all and she is genuinely stronger from it. She is not dealing with things as she has in the past. She has fully accepted her trauma and is moving forward in the most healthy way, for the first time.”

Any scoop on what we can expect from Arrow‘s 150th episode? –Tanya
Though it is being presented in documentary format, there will be plot movement. For example, when I asked showrunner Beth Schwartz if there was any significant Season 7 character we haven’t met yet, she excitedly answered, “Yes. And you will meet them at the end of [Episode] 12, our 150th episode (airing Feb. 4)” 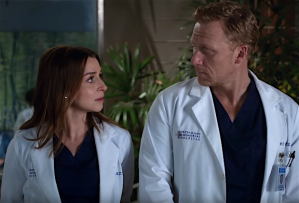 Any scoop on Grey’s Anatomy‘s Omelia? Are they going to stay together? Is Owen going to choose Amelia? –Ariana
The answer to your latter question came this week. But will Owen’s intent be enough? As Caterina Scorsone told us during a very recent set visit, while Teddy’s pregnancy bombshell “would cause wariness in the most wary-less people,” she hopes Amelia’s “year of incredible growth” will continue. “I don’t think Amelia can go back at this point. I think she’s definitely moving forward. But let’s see if she moves forward with Owen. Or if she has to find another way to thrive in the world.”

Is The Magicians done with the original Penny’s storyline, or will we see efforts to release his soul from The Library? —DK
“We are not done with that Penny,” co-showrunner Sera Gamble reveals. “The Pennys may meet at some point. As for why you see him again or how you see him again… I will just say it’s maybe going to be a little unexpected for people.”

On The Magicians, will anything from Season 3’s “Life in the Day” episode be brought back up in Season 4? –Danielle
I delivered your Q to Gamble and fellow EP John McNamara, and they wrote back: “We can’t say too much, but a certain detail from ‘A Life in the Day’ proves absolutely crucial in a Season 4 episode.”

Is there any chance Terry will be back on Power next season? —Andrea
We asked the man himself, Brandon Victor Dixon… and his answer probably isn’t the one you’d like to hear. “I’ve gone off to that good place,” he said, laughing as he cemented Tasha’s lover’s fate.

Do you have anything new on Lucifer? –Mary
When I was on set for the filming of the Season 4 finale, everyone was raving about Graham McTavish’s work as wrench-in-the-works Father Kinley. “The priest very much has got an axe to grind,” Tom Ellis previewed. “He’s kind of obsessed with this prophecy having to do with the Devil walking the earth and finding his first love, and when that happens evil will be released upon the world. He truly, truly believes that.” But can Kinley make believers of any of Luci’s human friends? Find out when Lucifer Season 4 hits Netflix… sometime this year! 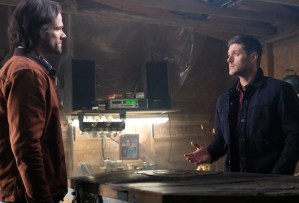 Anything on Supernatural Episode 300? –Axy
“A couple of things that make it unique,” says Brad Buckner, “is we’ve never really explored the population of Lebanon [and what they think of Dean and Sam]. ‘Who are these mysterious strangers who sort of live here, but sort of don’t? We don’t know where they live, actually. It’s a big secret.'” Also in the milestone hour (airing Thursday, Feb. 7), “There are some surprises that come up that produce some really surprising emotion,” Buckner hints. “It’s a little different from some of our benchmark episodes. It’s not particularly wacky, but there are some definite surprises and a big emotional corker.” Bonus Scoop: Episode 16 may find the guys in “a very crazy, weird world run by a psychic,” EP/director Phil Sgriccia tells us.

Anything on Good Trouble? –Rebecca
Viewers have not seen the last of Beau Mirchoff’s Jamie, so Gael won’t be the only one juggling two paramours. “[Callie] has that love triangle, too, where she’s dating Jamie and Gael,” executive producer Joanna Johnson says. “It’s kind of an interesting dynamic, and at this age, you don’t want to get committed. You don’t want to, like, settle down with someone. But emotions come into play, and what do you do?”

Is CBS’ Blood & Treasure still happening? Is it a summer series? –Sarah
It is, and it is!

When will Bosch Season 5 come out? –Mary W.
Seeing as the past few seasons have been April launches, the very smart money is on that same time frame.

Do you have anything on Chicago Med? –Adriana
Maggie is getting a big storyline that involves a friendship from her homestead. Per executive producer EP Diane Frolov, “We’ll get a sense of where she grew up, and we’ll meet someone from her neighborhood.”

What can we expect from the #OneChicago finales? —Leia
Hmm, instead how about I give you some intel on the next big #OneChicago crossover, between Fire and P.D.? “Things are always subject to change,” Fire chief Derek Haas notes, “but the premise is… there are some pretty bad robberies close to a firehouse near 51, and the police suspect a firefighter is involved. It becomes a much bigger deal over the course [of the crossover], and it’ll be one of those things where seamlessly we move from one story into the next, and you might not even know where Fire ends and P.D. begins. It’s going to be harrowing for all involved.

Any news on the pilot Joseph Morgan starred in for Fox? –MSP
That Gone Baby Gone adaptation, in which Morgan would have played the Casey Affleck role, was passed on last spring, and I can confirm that it thus is — all together now — gone, baby, gone. 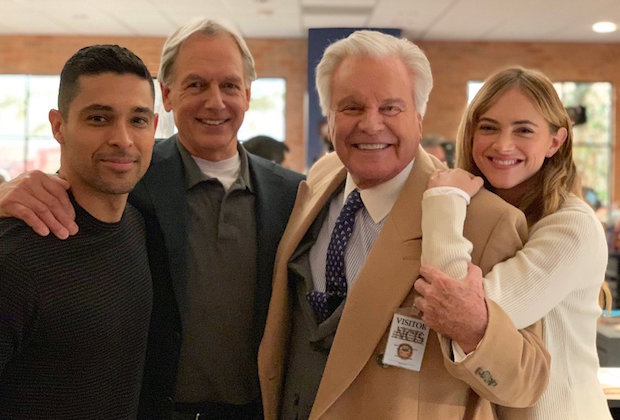 Anything on NCIS? — Nitza
As shared on the Twitter by Wilmer Valderrama, Robert Wagner Jr. is back on set for his annual visit. So what is Tony’s pop up to this time? I have learned that when Jimmy Palmer’s father-in-law is connected to a murder case, NCIS’ investigation uncovers that Sr. plays poker with said father-in-law — which is something that Jimmy did not know.

Any scoop on Criminal Minds is appreciated! —Diane
As this season’s penultimate episode (airing Wednesday, Jan. 30) opens the door to some haunted houses, “We explore the idea of ghosts and the spirit world and the afterlife…. It’s an interesting take,” A.J. Cook told me. “There have been some interesting twists for us so far this season, and they’re going to continue on until the end of the show.”

Real questions from real people get real answers! If you need the Inside Line on a favorite show, email InsideLine@tvline.com! (With reporting by Vlada Gelman and Kim Roots)