On paper, Legacies‘ Seylah seems like the perfect mom: She’s a great listener, she makes a mean sandwich and she’s always down for a little ironing. That said, she loses points for using all those things in an overall plot to murder her own son.

To be fair, Landon’s mother eventually came around in Thursday’s midseason premiere, though it took some convincing for her to accept him as her offspring. In fact, it wasn’t until Alaric and Hope tracked them down in a seedy motel room that she finally opened up about her dark past.

Here’s the gist: After serving in the military, Seylah landed a gig with an intelligence organization responsible for keeping the supernatural world a secret. When a creature threatened to expose that world to outsiders, she would track it down and bring it to headquarters. Think Men in Black, complete with Seylah having her memory wiped after each mission. When she discovered that the reason she forgot the creatures was because the organization was sending them to Malivore, she was tossed into the pit as well, only for her to suddenly reappear two years later… inexplicably pregnant!

Naturally, Seylah took off immediately after telling all of this to Alaric, leaving the gang with a heck of a mess to clean up. Not only did Landon apparently steal the second Malivore key from Seylah’s house — which, like the knife, he doesn’t remember taking — but a freaky fish creature (quite possibly a “very pissed merman”) climbed out of the bathtub and tried to kill everybody. 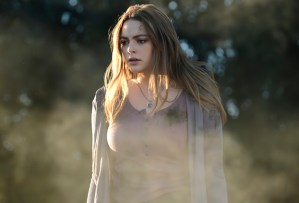 Hope had the brilliant idea of putting her Landon tracker in the key/urn, handing it over to the creature, then letting it take them straight to Malivore, where she believed Seylah was going. The fish monster led them to a complex owned by Triad Industries, though it only made it halfway across the lawn before being blown to little fishy bits. Meanwhile, Seylah strong-armed her way into the facility, where she sacrificed herself by diving into Malivore and erasing her existence from the world.

Well, from most of the world, anyway. For some reason, Hope remembered everything that transpired over the past few days. And while she’s willing to keep it from Landon until he’s ready for the truth, she had to tell Alaric everything — including that the urn has been brought back to the Salvatore School, and (uh-oh!) it’s starting to glow.

Also worth discussing this week…

* If you weren’t already sold on Hope and Landon as a couple, I have to imagine you’re ‘shipping them to the fullest after this week’s episode. They’re easily the two most damaged and emotionally guarded characters on the show, so when they open up to one another and get honest about their feelings… ugh, it’s just the best. They can also be very cute when they want to be, like when Hope asked him to be her boyfriend at the end of the hour.

* OK, so the guy who posed as one of the fake gas company employees is a high-up (if not the highest-up) at Triad Industries. But what’s his deal? And what’s his name? And is he Landon’s father? (I might have gone too far with that last question.)

* I couldn’t help but laugh when Hope told Landon, “My first kiss was with a 90-year-old vampire who helped murder my mother.” #JusticeForHayley

Your thoughts on this week’s episode? Any new theories percolating? Grade the midseason premiere below, then drop a comment with your review.