For starters, Louis’ new leadership role will shake things up at the firm, allowing Robert Zane to be “a little bit more fun,” showrunner Aaron Korsh previews in the following Q&A. But not everyone will adjust to the changing power dynamics so easily.

Elsewhere, newly promoted senior partner Katrina gets a significant professional and personal storyline, while Donna finds herself catching the attention of a very different kind of man.

As far as Donna is concerned, [she] was very key in inserting Louis into this position. Donna feels a lot of pressure for Louis to succeed in this role, possibly as much or more pressure than Louis feels. … Louis is going to have to go through a progression of getting used to being managing partner, as is Harvey, for that matter. The progression is going to allow for some funny stuff, it’s going to allow for some conflict, it’s going to allow for reconnection between the two of them. It’s a pretty fun little progression. In particular, the first two episodes, with Louis and Harvey, there’s a myriad of scenes that cover a myriad of emotions and topics and comedy and drama. 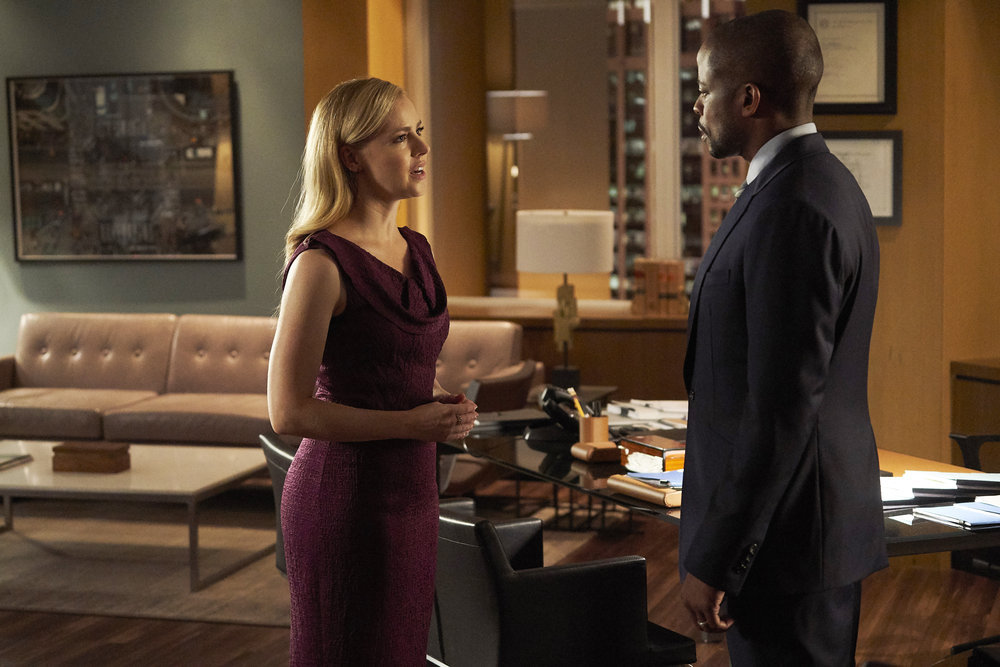 TVLINE | Louis being managing partner isn’t the only big change in the firm. Katrina is also now a senior partner. So what can viewers expect from her arc in these back six episodes?
I feel like we do focus very heavily on Katrina’s arc as a lawyer. What kind of a lawyer does she want to be? We have this idea that when you’re an associate or you’re a junior partner, it’s almost like, metaphorically, an associate is like a child and junior partner is like an adolescent. In your childhood and your adolescence, you get to experiment more with what kind of human being you’re going to be, and as you get older, what kind of person you’re going to be solidifies a little bit more. You can do more experimentation with your personality or your ethics when you’re a kid and an adolescent. When you’re a grownup, you’ve got to be held more responsible for your actions. So metaphorically, Katrina being an associate or a junior partner, she had a little bit more [room to] play.

Alex went to Harvey and said, “I want you to get Katrina to steal some stuff for me, to [pretend to] be Samantha,” in Episode 10, and that’s going to come back to haunt her a little bit. She’s going to be put in a position of having to decide, “Do I want to keep down this path of doing things that are a tad shady, or do I not want to?” That’s some stuff that we explore in the back six with Katrina heavily, vis-a-vis Samantha. They have more than one storyline together that I’m really excited about. In addition to that, she had a dalliance, to some degree, with Brian. She was developing feelings for Brian in the first 10 [episodes], and we’re going to continue along with that. Again, [it’s about] what kind of person do you want to be, what kind of senior partner do you want to be, and how is that going to play out? Because their feelings for each other now are going to come out and emerge, and we’re going to see what happens with that. 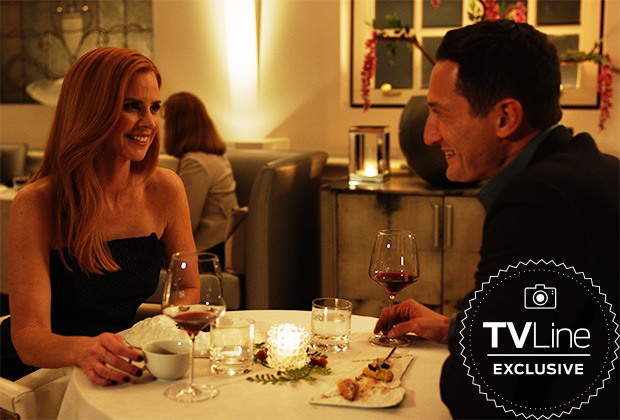 TVLINE | In the midseason premiere, we meet Thomas Kessler, Donna’s new love interest (played by Grimm‘s Sasha Roiz). How does this relationship compare to some of the others we’ve seen her in in the past?
Probably the biggest difference between this relationship and the ones in the past is: Thomas Kessler is a very ethical person. Stephen Huntley was a charismatic, confident human being that was also a little dangerous, and [Donna] probably was drawn to those aspects of him. But he turned to be, essentially, a sanctioned murderer, so he was a highly unethical person. With Mark, probably when they first met, he was a good guy and he was in love with her, and he was probably rightfully aware of her feelings for Harvey and probably a little insecure, ultimately, about it, and that’s what caused them to break up. Then when he came back in the picture, it was under dubious circumstances, because he wasn’t ready to call it quits with his wife.

Thomas is meeting her in a work situation. He’s confident, he’s successful, he’s funny, he’s a good guy, and none of those things are going to change in the course of the back six. He is a solid, confident, grown man who’s funny and smart and successful and sensitive and there for a relationship with Donna, and there isn’t a hidden, dark secret in his past or present that’s going to come to light. That’s the big difference between him and her other relationships.