This week’s episode of America’s Got Talent: The Champions opened with a six-year-old DJ getting the crowd on its feet and ended with a leather-clad woman in roller skates swinging around from a man’s beard. Mondays, right?

Of course, only two of the 10 acts that appeared on stage tonight will proceed to the big finale, where they’ll face the likes of Susan Boyle, Preacher Lawson, Deadly Games and Cristina Ramos. Let’s break down all 10 of this week’s auditions to find out who went through… 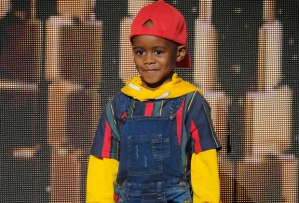 1. DJ ARCH JNR | Like your local light rock station, this South Africa’s Got Talent winner spun a solid mix of the ’80s, ’90s and today. What’s more, he did the whole thing dressed like a tiny, time-traveling Will Smith. Even if he didn’t make it to the finals, at least he walked away with the title of Coolest Six-Year-Old That Heidi Klum Has Ever Met, a solid consolation prize.

2. DARCY OAKE | I know we’re not supposed to peek behind the curtain, but I need to know how this Britain’s Got Talent illusionist was able to suspend Heidi Klum in mid-air. (I’d also like to know if the whole thing was a clever ruse to run his fingers through her luxurious supermodel hair. The long con.)

3. ANGELICA HALE | After coming in second to Darci Lynne Farmer, this Season 12 runner-up returned to The Champions with a vengeance — and of course she sang Rachel Platten’s “Fight Song.” The pint-sized powerhouse nailed every note and had the crowd eating out of her tiny little hand the whole time. Despite some of the criticism from the judges, Howie Mandel loved Hale’s performance, bestowing upon her this week’s Golden Buzzer.

4. TOM COTTER | You can boo me all you want, but with Preacher Lawson already through to the finals, I don’t think we need any more comedians in this game. And Simon Cowell apparently agreed, giving Cotter the first “X” of the season. He was right to call the act “just ordinary.”

5. PRINCE POPPYCOCK | We needed something to wake us up after Cotter’s sleep-inducing “comedy” routine, and living AGT legend Prince Poppycock gave us exactly that. I wasn’t wowed by his vocals, but it takes a certain kind of genius to blend Lady Gaga’s “Edge of Glory” and a number from the musical Pippin into a performance that actually works. Long live the prince!

6. RYAN STOCK & AMBERLYNN | Much to the judges’ horror, this sideshow duo recreated the stunt from AGT Season 11 that nearly got Ryan killed. (The fact that he and AmberLynn haven’t performed it since then speaks volumes.) Fortunately, she was able to successfully fire the flaming arrow into his mouth without sending him to the hospital this time around. And even though the judges couldn’t stand to watch the attempt, they were all very pleased.

7. SAMUEL J. COMROE | After watching Cotter crash and burn, all eyes were on this week’s other comedian, who placed fourth in AGT Season 13. It was nothing to write home about, but at least he didn’t get buzzed off the stage. And that’s a win.

8. PAUL POTTS | The original winner of Britain’s Got Talent, Potts — no relation to Beauty and the Beast’s enchanted teapot — sent chills throughout the crowd with his golden pipes.

9. JON DORENBOS | Holy charisma, Batman! Not only did the former Philadelphia Eagle have showmanship out the wazoo, but he had the judges’ jaws on the floor with his big reveal.

10. BILLY & EMILY ENGLAND | Wrapping up Week 3 was this extreme rollerskating duo from AGT Season 12, as well as Season 9 of Britain’s Got Talent. And while I’m not really how to compare a sexy S&M rollerskating performance against some of the other acts tonight, it was a heck of a way to go out.

With Angelica Hale already through to the finals, it was time to discover which act America chose this week. The final three came down to Jon Dorenbos, Billy & Emily England and Paul Potts, with Potts ultimately scoring that final elusive spot.

Are you glad Hale and Potts are proceeding in the competition, or were there more deserving acts on the AGT stage this week? Cast your vote below, then drop a comment with more of your thoughts.