Meet the new Greg… not exactly the same as the old Greg.

For its final season, Crazy Ex-Girlfriend has brought back Rebecca’s former love Greg — but now he’s played by Pitch Perfect star Skylar Astin, instead of original cast member Santino Fontana. (Of course, this being Crazy Ex, they didn’t hide the fact that a entirely new actor was playing Greg; Rebecca didn’t even recognize him at first.) Greg has changed, though, and not just physically. He’s in recovery for alcoholism, and seems like a much more stable romantic partner for Rebecca than last time we saw him. And she seems to agree: This week, she officially rekindled things with Greg, after a passionate roll on the living room floor while babysitting Darryl’s infant daughter. (Don’t worry, the baby’s fine.)

So are Rebecca and Greg meant to be after all? To find out, TVLine reached out to Astin, who told us all about what it’s like stepping into the role of Greg, the romantic “complications” Greg and Rebecca will face later this season — and the “Bruce Springsteen-style song” he’s gearing up to perform in an upcoming episode.

TVLINE | How did this casting actually come about? You and Rachel Bloom were already friends. Did she reach out to you personally?
Yeah, Rachel and I went to college together, and I guess she had the idea to bring Greg back in this way. She told me that I was the only person she thought about. [Laughs] We share an agent, and he called me. I was doing a play, and I said yes to zero terms. I was just like, “Yeah, that sounds great.” I love the show, and I knew that it was an ambitious way to enter the show, but I really trusted [co-creator] Aline [Brosh McKenna] and Rachel’s vision.

Then we got on the phone and they kind of told me where they were at, even though they were in the infancy stages of figuring it out, they just knew they wanted to do it and make a statement and do something fun and meta. The thing that I love about the show is that it’s so ambitious and gets to do things that really no other shows have done before. When we had the first table read for the episode that aired last week, with the cats, I looked to the writers and was like, “How are we getting away with this? This is insane!” 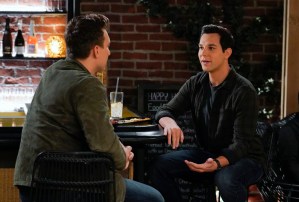 TVLINE | You come from Broadway, where it’s not unusual to play a role that someone has played before. Did you go back and look at how Santino had played Greg?
No, I did no sort of studying. I just kind of played it the way it was written. They write Greg in a specific way, and more so now, they write him in a way where Greg is in recovery. So I get to kind of bring a fresh perspective to Greg. There’s obviously a new human being playing the role, so that’s obviously a change. [Laughs] But I was never encouraged to watch anything, or study anything. I think actually, we all preferred it to just be a new thing, with respect to seasons past.

TVLINE | And you had actually worked with Santino on stage before, right? Have you talked to him about this?
Oh yeah, Santino and I did a play at New York City Center. He’s great. He found out before everyone did, of course, so he texted me right away. We like to say that we’re “brothers from another mother” now. [Laughs]

TVLINE | What was it like joining this cast midstream during their final season?
They couldn’t have been more welcoming. The cast is as fun as you’d think. There are times when people ask, “Is it really fun as it seems?” And this show is, like, case in point. It is quirky, everyone’s always laughing, table reads are a riot… Rachel sings, like, five songs live at a table read after she just wrote them, and we all are just howling. So even though I’m coming in in the final stretch, I’m sad that it’s ending. I’m almost like, “Why didn’t I get four years of this fun stuff?” 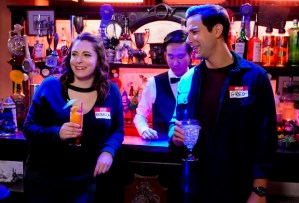 TVLINE | This week, we saw Greg and Rebecca rekindle their relationship, but we know this isn’t the happy ending just yet. So what kind of obstacles are they facing now?
I think there’s always been a very deep connection between Rebecca and Greg, and now that they’ve both worked through their issues, I think they’re going to have newfound respect, but then there are also going to be newfound complications. To see how they can actually get along while she’s in treatment, and while he’s in recovery, I think that’s going to be interesting. We’ll get to see if their connection can conquer the reality that life can throw at you in a complicated relationship like that. So are they really the best thing for each other? Maybe!

TVLINE | We know Greg is still grappling with the fact that Rebecca slept with his dad. Will he ever really get over that, or will that always be a sticking point between them?
I think there’s going to come a point in the series where that is going to have to be forgiven. And I know that seems insane… [Laughs] Because who could really get over something like that? But the fortunate thing about New Greg is that in recovery, you hear the most insane stories about things that people have done to their families and to their close friends, and you have to listen and forgive. Even in Episode 8, when she laid the news on him and he was reeling from it, we tried to pepper in him trying to put a lid on his feelings. Rather than punching a wall, he’s just going to say, “I see you, I understand you, thank you for telling me”… It’s really important for people not to hold things against other people in recovery, and that is probably to Greg’s benefit. And probably to Rebecca’s, in this instance.

TVLINE | Greg is still going to meetings for his alcoholism, too. He’s come a long way, but will we see him dealing with that this season?
Yes! There is a big Bruce Springsteen-style song I sing in a later episode that might give you a shade of Old Greg. You’ll know he’s still in there. When I found out I was doing it, I was like, “Alright, it’s time to be the Boss!”