Do not adjust the brightness settings on your screen, Trekkies: Season 2 of Star Trek: Discovery might be a bit lighter than you’re expecting.

After spending its freshman season at war, the CBS All Access sci-fi drama — returning tonight at 8:30/7:30c — sets a more lighthearted course for its sophomore voyage, executive producer Heather Kadin tells TVLine. “There was a lot of heaviness” last season, she concedes, but Season 2 “is a little lighter and brighter,” thanks to the end of the war between the Federation and the Klingons. “In any historical time, after war is much more celebratory and lighter and fun,” she notes, and Season 2’s tone follows suit. 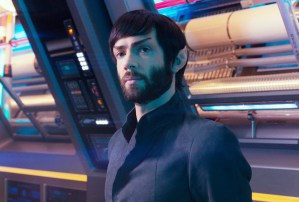 Part of that fun is introducing beloved Trek icons Spock and the Enterprise to the Discovery crew. (Last season ended with Burnham and the Discovery crew coming face-to-face with the Enterprise, a decade before the events of the original Trek series.) Ethan Peck takes on the role of Spock, and Kadin hints that we won’t be “seeing him the way you’ve grown accustomed to… He’s definitely a little more rough around the edges, and trying to find his voice.” (He’s certainly hairier than we remember.) Though he and Burnham were raised together as siblings, the two are “definitely estranged” when Season 2 picks up, the EP adds, promising that this season will “fill in all of those blanks” about Burnham and Spock’s shared history.

Anson Mount also joins the Discovery cast in Season 2 as the Enterprise‘s pre-Kirk captain Christopher Pike — and the fact that Pike has only appeared in a couple of Trek episodes allowed Kadin and the Discovery writers to essentially build his character from scratch. “He’s the captain you wish you worked for,” she teases. “He’ll have the final word, but he’s really wanting to hear what everyone else thinks, and the best idea wins. He’s very fair, but firm.” By Pike’s side is his trusty first officer Number One, played by Rebecca Romijn; the two have a “longstanding relationship” and “a banter and an ease with each other,” according to the EP.

Also on tap for Season 2: more from the Klingons, including “a big storyline with L’Rell and Tyler” and L’Rell adjusting to becoming “the female leader of that empire”; a budding friendship between former lovers Burnham and Tyler; “a larger visual scope,” thanks to shooting the season in anamorphic widescreen; and more standalone episodes, like last season’s time-loop adventure with Rainn Wilson’s Harry Mudd. “So much of Trek is made by those great standalone episodes,” Kadin notes. “I definitely think fans of true Trek, on the whole, are going to be really happy with this season.”

Got predictions/hopes/dreams for Season 2 of Star Trek: Discovery? Beam down to the comments.