Star Trek: Discovery launched its sophomore voyage with a high-octane premiere filled with interstellar action — and though we still haven’t laid eyes on new cast addition Ethan Peck as Spock yet, we did learn a lot about Burnham’s fraught relationship with the pointy-eared fan favorite.

We begin with a flashback to Sarek and his human wife Amanda welcoming a young Michael Burnham into their home. Her new guardians greet her warmly, but we also see a young Spock ducking away. Sarek sternly asks his son to teach Burnham how to be Vulcan: “I expect you to be friends.” Spock has other ideas, though, slamming his bedroom door in Michael’s face. Back in the present, Burnham and the Discovery crew face the Enterprise, with its Captain Pike requesting permission to come aboard with an ensign… and a science officer. Burnham and Sarek exchange a meaningful glance: Neither of them had expected to see Spock again. (Huh? Why not?) 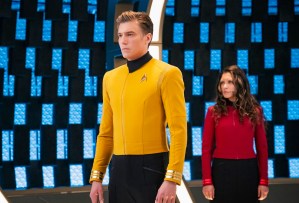 When Pike arrives, though, Spock isn’t with him. (The science officer is some human dude with regular old non-pointy ears.) Pike’s not there to just say hi, either: He announces that the Enterprise is out of commission and he’s taking command of the Discovery, at Starfleet’s request. He briefs Saru on the latest crisis: a mysterious series of red bursts synchronized across thousands of light years. No one has any idea what’s causing them, and Pike intends to find out. But he’s not a Lorca-esque hardliner. Before taking the helm, he assures the Discovery crew that he won’t betray them like their last captain did. (He’s not an evil mirror-universe imposter, guys! Well, at least he says he isn’t…)

Sarek thinks Spock just stayed behind on the Enterprise to help fix it up, but he also admits he hasn’t spoken with his son in years, and neither has Burnham. He wanted Spock to learn empathy from the human Burnham, he recalls, but “I do not think he ever fully accepted you.” She disagrees, though: “He may have… for a time.” (Seriously, what happened between those two?) But enough about Spock: Pike pilots the Discovery to the site of one of those red bursts, right in the middle of a treacherous asteroid field, where they find a disabled Starfleet vehicle, the medical vessel Hiawatha. Despite the serious peril — Saru’s threat ganglia are going crazy — Pike assembles a landing party, including Burnham, to search for survivors. 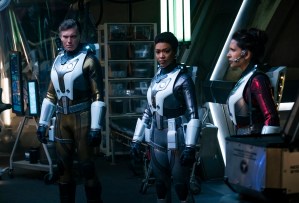 They rocket down there in one-seater landing pods, dodging asteroids along the way… and the mission quickly turns lethal when the non-Spock science officer gets smashed to bits. Pike’s pod is badly damaged, too, to the point where he can’t even eject, so Burnham has to ditch her own pod to save him moments before they collide with a jagged rock. They reach the Hiawatha, and meet a wisecracking engineering commander named Reno — hi, Tig Notaro! — who’s been stranded there for ten months now. (She didn’t even know the war was over: “No one’s speaking Klingon, so… we won?”) The Hiawatha‘s transporter is still functional, after a little tinkering from Burnham… but she gets left behind while the others beam back, just as the vessel starts to collapse around her.

She gets knocked out in the chaos, and wakes up to discover a massive wound in her leg. But she also has a vision of a red-hued angelic figure, with what looks like horns and wings, just as Pike beams down to save her. As Burnham recovers in sick bay, she tells Tilly she tried to bring back some of the asteroid material for analysis, but couldn’t. Tilly theorizes the rock could be a potent new source of energy, so Saru deftly steers the ship to capture a huge chunk of asteroid in the docking bay, using some kind of gravity-approximating device to haul it in. Pike’s going to stick around a while, too, sharing “joint custody” of the Discovery with Saru while the Enterprise gets fixed.

There’s still the matter of Spock, though. Pike tells Burnham he took leave, and he sensed something was off with him: “It was as if he’d run into a question he couldn’t answer.” Burnham confesses it’s her fault there’s bad blood between her and Spock, and beams over to the Enterprise to search his chambers for clues about his disappearance. There, she finds Vulcan bells and a three-dimensional chess board, along with a recording of Spock saying: “The nightmares have returned. The same image, again and again.” It’s accompanied by a digital rendering of those mysterious red bursts. So Spock’s on that case, too? Burnham offers up a plea: “I can only pray I don’t lose you again… brother.” 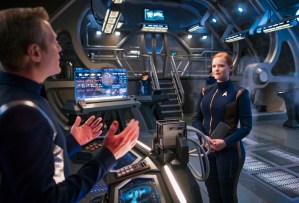 * A still-grieving Stamets revealed to Tilly that he’s accepted a teaching position at the Vulcan Science Academy; he can’t bear to be on the Discovery any longer without Culber. Oh no… he’s not really leaving, is he?

* Tilly, meanwhile, was just as delightful as always: talking too loud on the bridge; getting flustered by the dashing Captain Pike (“You have really beautiful nail beds”); shouting out, “This is the power of math, people!” during that asteroid capture… Stamets might want her to “say fewer things,” but I don’t!

* When Pike first came aboard the Discovery, did I spot the transporter technician wearing a Geordi LaForge-esque eye visor?

* No sign of Rebecca Romijn as Number One yet, either. Guess this season is really rationing out the big reveals, huh?

* Did Saru always walk like one of those inflatable noodle guys outside of a car dealership?

Alright, Trekkies, now it’s your turn: Give tonight’s Star Trek: Discovery premiere a grade in our poll, then beam down to share your thoughts in the comments.