Selina Kyle’s arc for the duration of Gotham‘s farewell run is the cat’s meow, to hear her portrayer tell it.

As the second of this season’s dozen episodes (airing Thursdays at 8/7c on Fox) came to a close, viewers saw that Selina not only had regained the ability to walk (thanks to seed supplied by “Poison” Ivy), but she came away from the transformation with a li’l something extra, as evidenced by her cat-like pupils.

In what ways is Bruce’s BFF the same, and how is she quite different? TVLine spoke one last time with original cast member Camren Bicondova about the final twists to come. 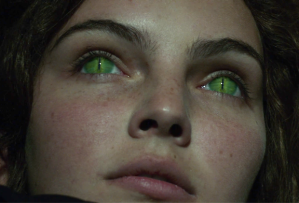 TVLINE | How is Selina feeling right now?
Oh, she’s feeling awful, very disoriented — it’s kind of that feeling that you get as a teenager in general, of just not really understanding what your mind is doing, what your body is doing. Except for her, it’s escalated because she was just given this holistic drug, I guess you could say, so now she’s going to take some major physical changes that she can’t control because A) it was from the drug that Ivy gave her, but also B) it’s not necessarily the characteristics of a human that she’s embraced. She has taken on animalistic characteristics.

TVLINE | Do any new “tricks” come with those animalistic characteristics?
I mean, she’s just ferocious. If she was fierce before, she’s even more fierce, but on a completely different level. She’s ruthless, and she doesn’t have a filter. Like, before, she was very similar to Bruce where she doesn’t want to kill anybody, but now she’s different from Bruce in that if she has to, she will. She wants revenge on everybody who has done her wrong.

TVLINE | Can she now leap to the top of the refrigerator effortlessly?
[Laughs] Honestly, I focused on some physicality and differences there, but it was more about of a change in mindset, at least as an actor. So, yeah, I hiss, and when it came to the stunts and stuff, I collaborated with my stunt double to be a bit quicker with certain things and things like that. 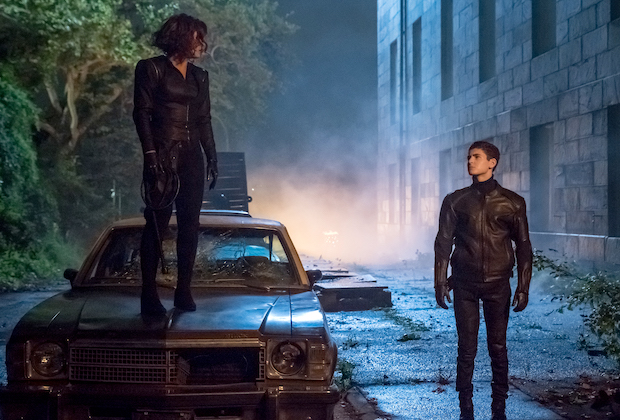 TVLINE | Oh, no.
I mean, I think the #CatBat fans will really love this season, and I think they’ll really hate this season, too, because the struggle this season for them isn’t because of something Selina can control but because of what she’s doing that she can’t control. It’s the same dynamic, but it’s also very different because it’s coming from a different perspective, and that’s what I’ve loved about this season. The writers took Selina’s complexity and electrocuted it five times.

TVLINE | And the fact of the matter is that, as grownups, she and Bruce famously have a contentious relationship. So something had to happen to make them a bit less lovey-dovey.
Yeah, but to be honest, and what the audience will see this season, is this change in Selina isn’t that reason. The reason for their complexity as grownups happens at the end of the season.

TVLINE | Oh? I like it. Is Selina going to ally herself with anybody, or is she going to be a lone wolf amidst all and gangs that are out there?
Oh, definitely a lone wolf. She’s learned by now that she can’t trust anybody.

TVLINE | I tweeted you a picture I took of you on Gotham’s very first red carpet in New York City, at the public library. What was going through your mind that night?
Oh, I was so clueless. [Laughs] I was just this 15-year-old girl. I mean, I went to Topshop for that outfit. I just didn’t know what to expect.

TVLINE | And there you are on the carpet alongside, like, Jada Pinkett Smith, Ben McKenzie, Donal Logue…
Yeah. Honestly, I don’t think I really was in a place to understand what was going on. When you’re that young, you have no concept of what work is and what’s weird and what’s abnormal. Like, that’s just been my life — working and doing red carpets, and it’s a very abnormal thing. I’m just realizing now what I like and what I don’t like, but leading up to that premiere, what hit me was once we got there and we were at the New York Library…. I went back to the New York Library recently and I was just like, “Wow, I’ve been here before for a premiere of a show that I’m on.” It didn’t hit me until recently,but I’m kind of glad that it worked out that way because now I can appreciate everything with a different mentality and a different sense of maturity.

TVLINE | Well, I think that anyone who follows you on social media has seen how you’ve matured. You’ve gone through so much during these five years, and you’ve shared a lot of that with fans. Would you say the good has outweighed the bad, the messages you’ve been able to pass along?
I wouldn’t necessarily say they outweigh them. I think that there’s a balance. For every bad thing that happens, a good thing comes out of it, and all of that happens through time. If the good outweighed the bad, then I wouldn’t have any balance in my life, but I will say that this show has brought me so many blessings in so many ways. I don’t know what’s next, but I’m excited for whatever it is, and I know that it’ll all be worth it in the end because I’ll be able to connect with people and work incredible jobs and live a great life because of it.

TVLINE | What will you miss most about being on-set with this cast?
Honestly, just connecting with everyone almost every day. I mean, making eye contact is something that we as people take for granted, and to be able to really communicate with so many people every day, but also have it feel like a family, is what I’m going to miss. But I have their phone numbers!