President Donald Trump’s next State of the Union address, scheduled for Tuesday, Jan. 29, will be delivered in writing and not televised — or rescheduled for a later date — due to security concerns caused by the partial U.S. government shutdown, which is now in its 26th day.

“During the 19th Century and up until the presidency of Woodrow Wilson, [SOTUs] were delivered to Congress in writing,” Speaker of the House Nancy Pelosi wrote on Wednesday in a letter to the president. “And since the start of modern budgeting in Fiscal Year 10977, a State of the Union address has never been delivered during a government shutdown.”

Because it is designated a National Special Security Event by Secretary of Homeland Security Kirstjen Nielsen, the SOTU requires “the full resources of the Federal Government to be brought to bear” to ensure the security of the well-attended event, Pelosi noted. But right now, the Secret Service as well as the Department of Homeland Security “have not been funded for 26 days” and as such are “hamstrung by furloughs.” Because of resulting security concerns “and unless the government re-opens this week,” the Speaker has told Trump to choose a later date for the live address, or deliver his speech in writing. 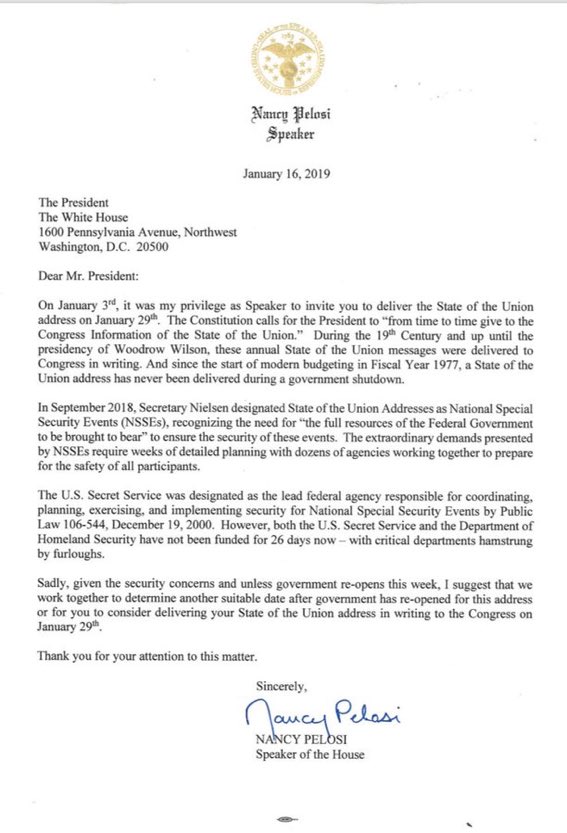 President Trump has not yet responded to the Speaker’s letter.

Last year, Trump’s State of the Union was watched by 45.6 million people, off just 5 percent from his February 2017 joint address to Congress.