The Season 5 premiere of Pop’s addictive Schitt’s Creek was for the birds — but I mean that in a literal way, not as a dis. (Perish the thought!) Not only did the episode take us to Bosnia to see how Moira’s feathers got ruffled on the set of The Crows Have Eyes III, but it allowed us to follow David onto a hilariously uncomfortable perch and revealed how Johnny fared without his wife in their love nest. Read on, and we’ll go over all of the sweetest, funniest bits… 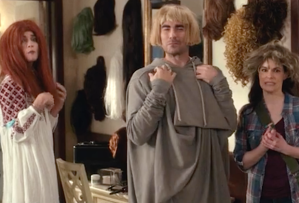 ‘ADVENTURE DATES SOUND LIKE SOMETHING A MARRIAGE COUNSELOR WOULD PRESCRIBE AS A LAST RESORT’ | As the episode opened, David, Alexis and Stevie were having a field day playing with Moira’s wigs when Johnny got a call from the set in Bosnia. “Kids, say hi to your mother!” he told them, putting his missus on speaker (as you’d expect, by the hardest). “She’s not my mother,” Stevie quietly replied. (Ah, Stevie! How I’ve missed you!) In short order, Moira mistook every voice that she heard for someone else’s, then cut the conversation short to go meet with her director, who she’d been told was a pretty young up-and-comer from New York. Bummed to have been hung up on, Johnny warned his offspring, “You’d better remember which nails you pulled those wigs from, ’cause your mother keeps a spreadsheet.” 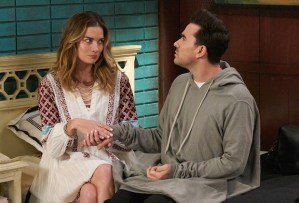 Later, Alexis admitted to David that she had a concern. “No, your natural deodorant isn’t working,” he shot back. But that wasn’t it. She’d seen the “How Electric Is Your Relationship?” quiz that he’d taken (repeatedly) in a 1981 issue of M’Lady magazine — “It’s Major Lady,” he corrected her — and feared that working side by side with Patrick at the store had moved their romance to Snoozetown. The results, after all, said that his relationship with his boyfriend was in need of a generator, whereas her relationship with Ted was rated an electrical storm. How was that possible? asked David, incredulous. Ted’s a veterinarian who irons his polo shirts! They work at it, Alexis told him, by taking off Friday afternoons to go on adventure dates. In fact, that very afternoon, they’d be taking a tour of Elm Falls Park — “a very cute look for us” — in case David and Patrick wanted to come along. 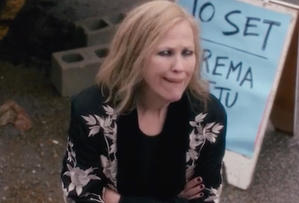 ‘IT’S ME, IF YOU CAN BELIEVE IT!’ | In Bosnia, Moira reported enthusiastically to the trailer of her director, Blair-no-last-name… and was met with such disinterest that she assumed he was breaking her down just so that he could build her back up again “like Stan Kubrick did to Shelley” Duvall. Alas, he was not. When she attempted to give him her script revisions, he laughed that there was no point. The movie wasn’t, as she thought, “a timely allegory about prejudice,” it was a crapfest about mutant crows. What’s more, to him, all it was was a trip to Bora Bora. Back in Schitt’s Creek, Johnny was having a hard time, too. He missed Moira so much that he’d taken to doing everything on Roland’s to-do list at the motel. “What’s next?” Roland asked Stevie. “I come home and he’s playing strip backgammon with my wife?” 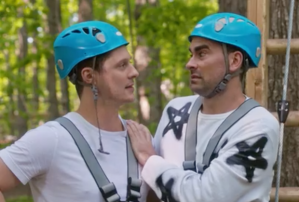 Meanwhile, David arrived at the apothecary and — Alexis’ words ringing in his ears — did his best to make it seem like he found it super duper sexy to see Patrick doing inventory while wearing rubber thimbles that he insisted made it easier for him to turn the pages. Soon, David was fibbing that Alexis and Ted’s relationship was in trouble — so much so that she’d practically begged them to join in on their park outing. No sooner had Patrick relented and said OK, they could close up shop early, than David came to regret his lie: It turned out that the park tour took place about 30 feet off the ground — and, as his boyfriend noted, David was fearful of heights. OK, maybe not fearful. “‘Fearful,'” David groused, “makes me sound like some kind of Dickensian orphan with a chronic illness.” What’s more, Alexis and Ted seemed as happy to Patrick as happy could get. 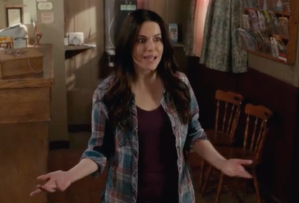 ‘THE SPECIAL IS CREAM OF MUSHROOM SOUP; WE DON’T ACTUALLY HAVE TO-GO CONTAINERS FOR THAT, SO I’VE JUST DOUBLE BAGGED IT’ | Back in town, Johnny discovered Stevie and Roland having lunch together at the cafe. Had he missed the call for a team meeting? (Actually, yes — the busy bee hadn’t heard them as he was noisily mowing the lawn.) Maybe with Moira away, Roland suggested, Johnny was doing all that work to fill “a big, black, empty hole in [his] life.” Before Johnny could get too offended, Moira phoned, saying that she never should have signed on to the movie. She hadn’t complained when she’d been booked in a bed-or-breakfast, but now it appeared that her director was on a kamikaze mission to sink the ship, and “I refuse to be the goddess on the prow!” Though Johnny clearly missed her like crazy, he encouraged her not to give up on the comeback role that meant so much to her. By the time he was done, Moira was back in fighting form, likening herself to “Sandy Bullock” keeping the Speed franchise alive with Cruise Control. 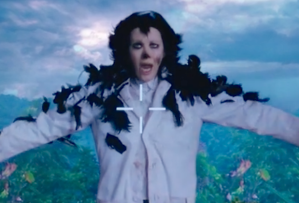 Off that pep talk, Moira reapproached Blair. This time, however, she’d done her research and found out that the hot shot had recently been dropped from a blockbuster. That being the case, maybe he could look at their B-movie less as a barrier than a gateway. Bird s— being bird s—, how? he asked. Recalling that during her stint as a soap star she’d held the record for the longest demonic possession in daytime history and once played her own father, she suggested that her script revisions might be a good place to start. Back in Schitt’s Creek, Stevie at last got Johnny to admit that yes, he missed Moira desperately. Eight days, he noted, was the longest they’d been apart in 40 years. To cope with her absence, he’d been working himself into the ground, and now he was pooped. So perhaps he could call Roland and tell him to quit talking about resigning from the job Johnny stole. Er, maybe Stevie could do that? “No,” she deadpanned, “that’s not my job.”

‘QUIET YOUR CAWS SO THAT WE MAY TAKE UP OUR CAUSE: REDEMPTION!’ | Finally, as David wobbled, frozen 30 feet in the air in the middle of a tree rope (which will haunt my nightmares for weeks to come), Patrick recalled that among his fella’s phobias was a fear of aerial breakups. OMG, cried Alexis. She’d forgotten all about her brother’s parasailing incident with Anderson Cooper. Now she was sorry — so sorry that she admitted that, as David originally thought, the relationship quiz was rigged. “In Need of a Generator” was the only answer any couple could get! As he angrily wobbled his way to the tree, he made it clear to Alexis, Ted, Patrick and any sparrow that happened to be nearby that he loved his and Patrick’s relationship, thimbles and all. (As if there had ever been any doubt!) And in Bosnia, to Blair’s astonishment, Moira’s revisions were… working. Thanks to his fowl player, The Crows Have Eyes III just might take flight after all!

So, what did you think of the Season 5 premiere — and Moira’s crow accent! Grade the episode in the poll below, then hit the comments.