Well, the potentially deadly cat is out of the bag.

In Thursday’s winter premiere of How to Get Away With Murder (ABC, 10/9c), Laurel finally reveals Gabriel Maddox’s identity to the rest of the Keating Four (plus Oliver!), and the news does not go over well.

TVLine has an exclusive sneak peek at the tense scene, embedded above, in which Laurel tries to explain why she protected Gabriel’s secret for weeks. But Connor, Asher and the rest of the gang feel understandably betrayed — particularly Michaela, who is shocked that Laurel “let me make out with [Gabriel] all week!”

Michaela then reveals that she saw blood on Bonnie’s leg at the wedding reception, and the group begins to wonder if perhaps Gabriel has been killed… though viewers at home already know that Gabriel is alive, and he’s standing in Annalise’s apartment. 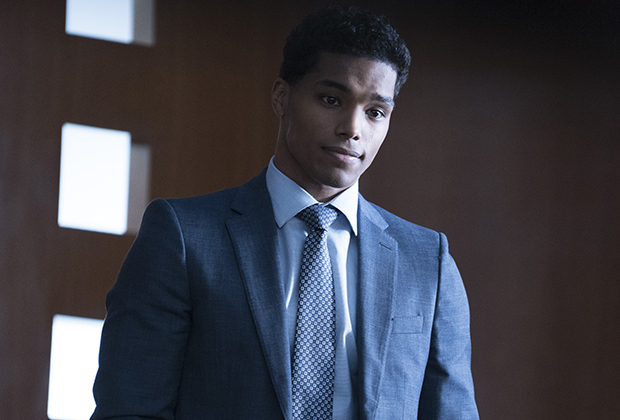 “It was a complete shock for him to be caught red-handed in her apartment,” says Rome Flynn, who plays Gabriel on the drama. “We pick up right where we left off, and the dynamic is an interesting one, to say the least. They don’t know each other’s motives yet, so it’s a standoff between them.”

But Flynn says he would not describe Gabriel as a villain in the weeks ahead (“He’s just searching for answers like everyone else,” he remarks), adding that the back half of Season 5 will reveal much more of Gabriel’s backstory — including some answers about the mysterious duffel bag in his apartment.

“[The duffel bag] is pivotal to the storyline,” Flynn hints. “We will find out more information as to why he has that money, why he has so many IDs, why he has that data box. We figure out a lot of that in the next few episodes.”

Watch our sneak peek of the midseason premiere above, then drop a comment below with your thoughts!