Pack up your swimsuits and pre-write your apology letters: Yep, we’re heading back to Temptation Island. The infamous Fox reality show, which took couples unsure about the future of their relationships and put them on an island filled with dozens of sexy singles, is back for an all-new season on USA Network — and look, original host Mark L. Wahlberg is back, too! (Hey, if Chris Harrison can host The Bachelor for nearly two decades, why can’t he?)

Based on Wednesday’s premiere, this Island will faithfully follow the established Fox format, with four couples going on a “journey” (get ready to hear that word a lot) to put their relationships to the test by… um, dating 24 other people. As the four couples sail to the island, we meet them:

* Javen and Shari, both 25: These high school sweethearts have been together since they were 16, and have lived together for five years, but they’re not ready to rush into marriage yet. They do have some baggage, though: She caught him cheating a few years ago, and still doesn’t fully trust him. (File that one away for later.)

* John, 35, and Kady, 30: This Southern-fried duo met on Bumble, and they like to go out and shoot things for fun. Their issue: John’s not enough of a manly man… at least by Kady’s standards. “Kady questions my masculinity a couple times a week,” he says (???). She wants a take-charge alpha male, it seems, and he freely admits he is not that. OK!

* Nicole, 25, and Karl, 31: They’re both fitness freaks, but they have trust issues. She was dating someone else when they met, and broke up with her then-boyfriend to date Karl… who is keenly aware of this. “If she could do it to him,” he reasons, “it could happen to me as well.” She’s also insecure about their age gap, and worries that he’ll make a deeper connection with a more mature woman.

* Evan and Kaci, both 28: These two goofballs met at age 19 and have dated on and off ever since. Her family is staunchly religious, and chides them for living together before getting married. “This is not what I had planned for my daughter,” her mother weeps. (Wait till she’s on Temptation Island, Mom!) Evan’s story is crazy: His dad cheated on his mom, and then was murdered by the woman he was cheating with… so he understandably has some relationship hang-ups. If he doesn’t propose by age 30, though, she warns him that “there’s a million dudes out there that are gonna ask me to marry them.”

The four couples arrive on the island and are greeted by Wahlberg, who leads them to a plush beach resort and pours them some sponsored Freixenet sparkling wine. He asks them how they’re feeling… and ominously warns them they have no idea what they’re in for. That resort is just for the guys, though; Wahlberg takes them to another, even more luxurious mountain villa, where the women will stay. (“More room for muscles,” Kady observes. Poor John!) The drama kicks off when a waterfall suddenly starts rushing by the pool, and the 24 singles line up seductively behind it. It’s temptation time! 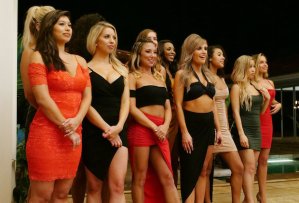 The singles introduce themselves, with the usual blend of flight attendants, startup CEOs, yoga instructors and gals with their “butt cheeks out.” A few of the highlights: Roman, a Southern gentleman who instantly gets John worried; a Cuban lover named Carlos; Val, a Brooklyn barber and admitted mama’s boy (“The only thing she taught me was how to treat a lady right” — that’s the only thing???) and well-endowed Southern belle Katheryn. Shari’s claws are out right away: She sniffs, “I’m not too impressed,” as the single girls walk out, and angrily stews the whole time they’re talking. Then when Javen dares to say the lineup looks bad for the girls, she snaps at him: “Oh, so you think it’s good for you?” They fight, making the other couples uncomfortable while the single girls giggle at the chaos they’ve created.

The next morning, they’re still fighting when the single guys come in to whisk the four women away to a cocktail party. Of course, the single girls quickly appear to fill the void. Kady gets close with Carlos: “You seem very deep and very passionate… my boyfriend is not.” (Seriously, John, get out while you can.) Evan makes a beeline for yoga instructor Brittany: After they take a deep meditative breath together, they discover they went to high school in the same town! Javen connects with flight attendant Jeffri, who throws some shade Shari’s way, calling her “a hard one to love.” Katheryn the Southern belle wastes no time cozying up to John, cooing: “Let’s be best friends… and maybe even lovers!” 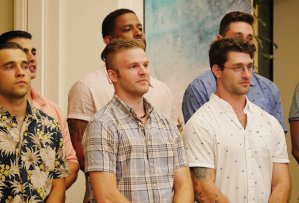 The couples have a chance to block all these connections, though, Wahlberg explains: They can assign a necklace to one of the singles, which would prevent that single from dating their partner. (They can still spend time with them in the house; they just can’t go on a date until the final week.) Kady jumps at the chance to block Katheryn, and it’s probably a smart choice. John admits he thinks she’s “the hottest out of all of them.” He, meanwhile, blocks Roman the “country boy” from dating Kady. The other couples choose not to utilize the necklace block, while Katheryn insists she’ll just “pretend this isn’t even here,” and treat John like “he’s a boyfriend… which he probably will be.” Oh, she’s trouble, that one.

At their last dinner together, the couples confess to their fears about what’s to come… and Javen and Shari are still on shaky ground. This is the last time they’ll have together until they leave the island, so Wahlberg encourages them all not to leave anything unsaid. The three other couples hug and kiss and exchange loving sentiments, while Javen and Shari continue bickering, with her stiffly hugging him when it’s time to go. “I’m sure you’re gonna have fun,” she adds snidely. And in the season preview, we do see a lot of fun: exotic fantasy dates, massages, twerking and conga lines. Plus, a lot of crying, a lot of kissing, someone hooking up in a dark room, and someone lamenting that “Temptation Island got the best of me.” Welcome back!

Are you tempted to keep watching? Give the Temptation Island premiere a grade in our poll, and then hit the comments below with your post-premiere thoughts.