Aliens officially became the new vampires on Tuesday with the premiere of Roswell, New Mexico, The CW’s timely adaptation of Melinda Metz’s books about smoldering extraterrestrials and the humans who love them.

The (sort of) reboot’s first episode introduced viewers to Liz Ortecho, who reluctantly returned to her hometown when the government cut federal funding to her latest research project. (“Someone needs money for a wall,” she explained.) Given that her father is undocumented, Liz was understandably on edge when she encountered an ICE checkpoint on her way back into town, though her mood improved considerably when she spotted Max Evans, an easy-on-the-eyes sheriff’s deputy for whom she carried a massive torch in high school.

Liz and Max’s reunion continued at her father’s diner, where he caught her dancing to Counting Crows’ “Mrs. Potter’s Lullaby,” the only song guaranteed to pull her out of a funk. Though he declined her offer to slip booze into his milkshake, Max was eager to get back in Liz’s good graces, assuring her, “I’m not of the bad guys.” He then proved this by using his alien healing powers on her after a drive-by shooting left her bleeding out on the diner floor.

Oh, did I forget to mention that Max is an alien? Because he is — and he’s not the only one. Roswell is home to two other known extraterrestrials: Max’s sister Isobel, whose alien nature remains a secret from her husband, and Michael, a loose cannon eager to escape the trappings of humanity.

Despite Isobel’s sincerest warnings, Max felt strongly enough about Liz to let her in on their big secret. (Well, that and she was starting to wonder how she survived getting shot.) And much to everyone’s surprise, Liz was pretty cool about the whole thing; she didn’t even question whether Max landing in 1947 technically makes him 72 years old…? 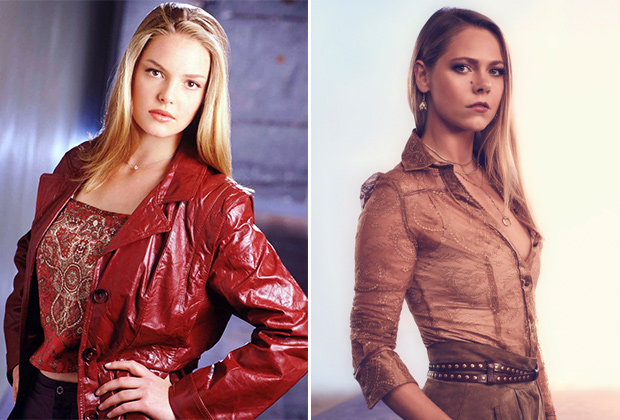 Following the big reveal, Max explained that his handprint — which is what saved Liz’s life earlier in the episode — created a psychic bond between them. “What you’re feeling is an echo of what I feel for you,” he said. When he told her that it would wear off in a few days, she replied, “I’ll kiss you then.” It was actually kind of beautiful, and I definitely wasn’t expecting to fall for these two so quickly.

Of course, I’d be lying if I said I wasn’t troubled by Isobel’s final words to Max — that Liz “can never know about what happened” to her sister Rosa, who died in a drug-related car accident years earlier. (Hey, every show needs a mystery.)

Other premiere plots worth discussing…

* Speaking of falling for couples early, I should also note that I’m fully invested in whatever’s going on between Michael and Alex, a military man fresh off a tour in the Middle East. (I’m so happy to have Tyler Blackburn back on my TV.)

* Is anyone else worried that Kyle — the high school friend-turned-doctor who first noticed the mark Max left on Liz — might go to the dark side? The way Alex’s father presented aliens as a threat to our way of life could persuade him to take action. (I’m also happy to have Michael Trevino back on my TV.)

* Again, and I’m serious this time: What happened to Rosa?!