This week on The Flash, we got a bit of insight into the Nora/Thawne dynamic, while a new metahuman in Central City set in motion a series of events that just might lead to Barry’s undoing.

Picking up with Nora visiting Thawne in prison circa 2049, she makes clear that he’s “lucky” she came back at all, given what she now knows about his role in her grandmother’s death. Thawne admits that he harbors the same level of hatred for Barry as vice versa, but then argues that he has given Nora so much despite that — time travel lessons, time with her father, fighting crime side by side. “As long as I can remember, I have only thought of myself, but I don’t want that to be my legacy,” he said. But Nora no longer trusts him, and declines to help him any further.

The Meta of the Week would lead Nora to reconsider her stance. Simply said, Raya aka Silver Ghost is an honorably discharged Air Force pilot who uses meta tech to seize control of vehicles, starting with a Lamborghini. When Barry chases her down and touched the souped-up car, its unstable dark matter destabilizes him, putting him at risk of  phasing into the ground. To solve that problem for the time being, the team guides him into a Pipeline cell, where his powers will be dampened.

That leaves Nora to pick up the slack, first by delivering CSI evidence against Joss aka Weather Witch at Cecile’s first post-maternity leave trial. Sensing remorse from Joss, Cecile starts to throw the case, but Nora on the stand grows full of fury, believing that bad people can never change. Nora sticks to that theory when it appears that Joss is in cahoots with Raya, especially after the latter breaks the former out of jail, but Joss eventually proves her contrition by using her powers to crash the next-gen, Wayne tech-powered getaway car they pinched from the famously, famously impenetrable ARGUS.

Joss’ turnabout, coupled with a pep talk she got earlier from Barry — who when prompted went so far as to suggest that even Eobard Thawne (!) could change, and heroes should try to see the good in people — led Nora to reconsider her POV on Thawne, whom she visited in the hour’s penultimate scene.

“You either trust me or you dont, there is no in between,” Thawne told Barry’s daughter. Nora maintained that she didn’t, but she is willing to give him a chance to change her mind. Thawne is glad to hear this, but reminds her that time is not on his side, and we see a clock outside his cell that is ticking down, with less than 52 minutes to go. “Let me prove there is good inside me,” he says, and Nora agrees, asking: “What’s next? 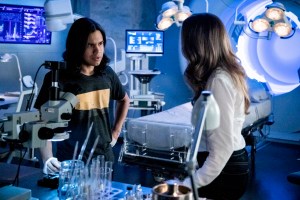 Elsewhere in the midseason premiere:

* After the final dagger micro-shards were removed from his hands, Cisco realized that they were not dampening his powers but removing them. And because of that, they could be the foundation for a metahuman cure. Caitlin’s somewhat on board with that idea, but Killer Frost isn’t, and she thwarts Cisco’s progress. Later, though, Caitlin brings Cisco to her father’s old lab, suggesting that Thomas’ metagene research could help Cisco in his quest.

* Jesse L. Martin’s since-ended medical leave was finally written into the show, with Joe away visiting son Wally, taking the baby with him.

* To bide his time spent in the Pipeline cell, Barry found himself oddly engrossed by Legend Mick Rory’s debut novel.

What did you think of “The Flash & the Furious”?